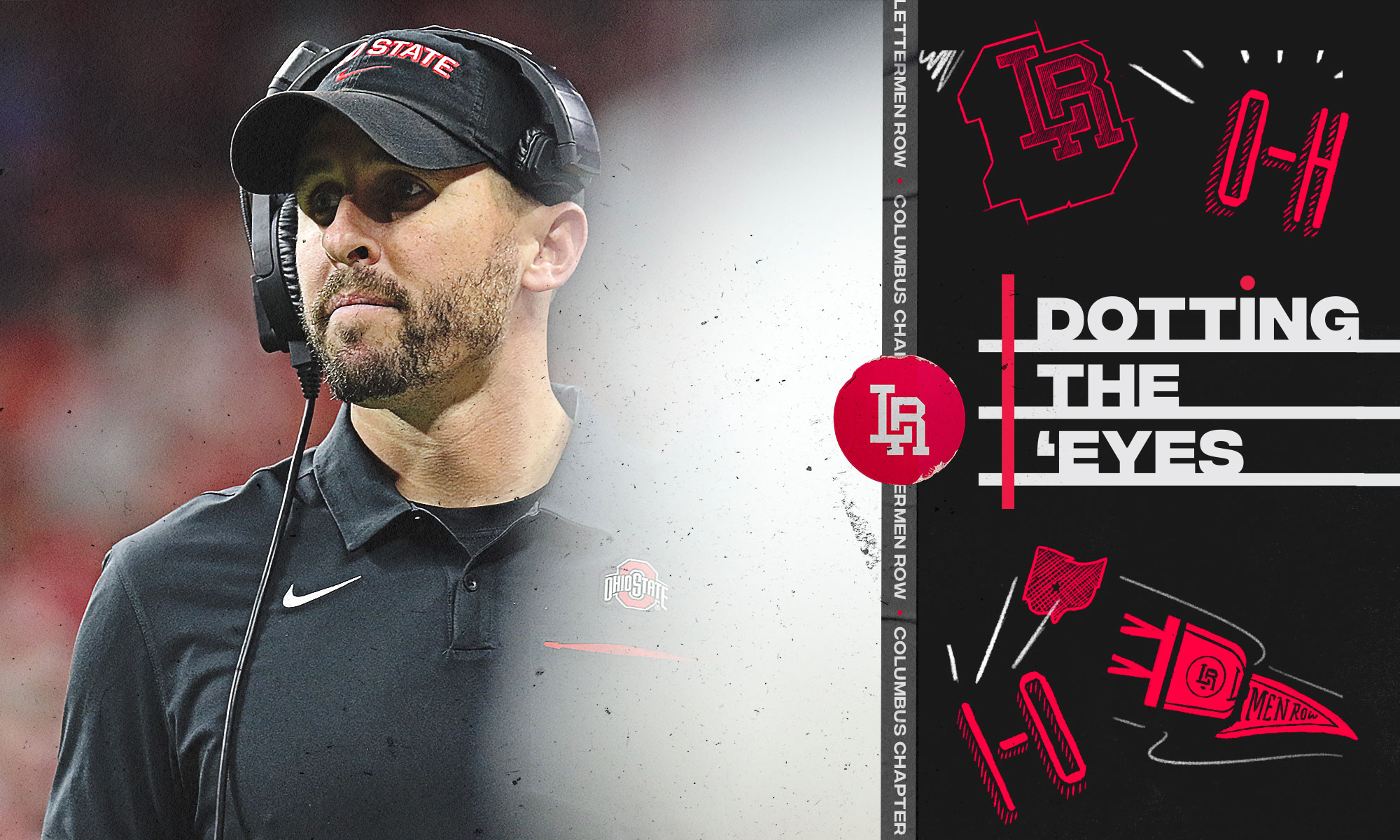 Brian Hartline and Ohio State may begin looking closer to home for a third receiver option in 2021. (Birm/Lettermen Row)

Stay in touch or be left out because Ohio State recruiting is a 24-hour, seven-day-per-week obsession. What’s the latest news as the Buckeyes build for the future? Get that and more Sunday through Thursday on Lettermen Row. Today’s notebook focuses on an in-state standout who recently decommitted from Michigan and could be a rising Buckeyes target.

One of Ohio’s top 2021 receivers is back on the market, and the Buckeyes could soon be getting involved in his recruitment.

Markus Allen, a 6-foot-3, 205-pound wideout at Clayton Northmont, decommitted from Michigan on Wednesday. He had been committed to the Wolverines since late April, but questions about his role in their class had been percolating, especially as Jim Harbaugh’s program added commitments from three other receivers in the last few months.

Whether or not Allen was processed out of the class by the Wolverines is somewhat irrelevant, because either way he’s now wide open in his recruiting process. There has, according to sources close to Ohio State, been some contact between the Buckeyes and Ohio’s No. 14-ranked senior. It’s a safe bet that Brian Hartline will be watching the film of Allen’s first two games this season.

Lettermen Row wrote fairly extensively about Allen back in February, and he detailed the growing relationship he had with Hartline at the time.

“I think Coach Hartline is a very good dude and coach. You can see he has coached some high-level wideouts at Ohio State,” Allen said. “When he first approached me, he came off as a pretty laidback coach. He told me he liked my film and came off pretty cool, and ever since we have been staying in contact.”

That contact was supposed to result in a spring visit to Ohio State and a camp performance in Columbus in June. But that didn’t happen and Allen committed to Michigan — ostensibly his best offer then. So the missed camp opportunity became a moot point until now.

The Buckeyes receiver search in 2021 has been entirely focused on 5-star prospect Emeka Egbuka for the last few months, and there’s no reason to expect that to change even if they do take a deeper gander at Markus Allen. As the unknowns around Covid-19, its impact on the current Buckeyes roster and future recruiting continue, the Ohio State staff is going to leave no stone unturned. Allen is a very good football player worth a good long look.

An early nominee for the best name in the Class of 2022, Bear Alexander has been staying in regular contact with the Buckeyes and defensive line coach Larry Johnson.

A 4-star defensive tackle from Denton (Texas) Ryan High School, Alexander was one of the many prospects that received some attention from the Buckeyes as the calendar turned to September. Ohio State offered back in May.

“Ohio State is big time,” Alexander told Lettermen Row. “It’s one of the biggest schools in college football, and it means a lot to my offers list.

“You know, it’s amazing [to talk to them]. We immediately dive into ball, talk scheme and how I can fit into the system.”

The country’s No. 10-ranked 2022 defensive tackle, Alexander has had the opportunity to see a number of college campuses already. Ohio State is not one of them, yet.

“I’ve been to Baylor, Texas Tech, Florida, Texas, Georgia, Clemson, Alabama, Oklahoma and TCU,” he said. “Soon as [recruiting visits] clear up, Ohio State is definitely a place I want to see.”

The Buckeyes are taking it slow recruiting the quarterback position in 2022 as football starts up again around the country. One of the young prospects who has caught Ohio State’s eye early in his junior season is Georgia’s Jacurri Brown, a 6-foot-4, 205-pound prospect from Lowndes (Valdosta) High School.

Ohio State has not offered Brown yet, though the Georgia offer he picked up Wednesday night may expedite that. But the conversation has been direct and honest and his feelings about the Buckeyes is sincere.

“Coach Dennis says they’d love to coach me, not to worry about the offer and to trust the process,” he said. “They don’t offer until they see quarterbacks throw, live and in person, an COVID-19 messed that up for the spring. They’re the best team in the Big Ten every year, and I know they have a Georgia boy right now that’s workin’ magic for them at quarterback.

“They have eight national titles and they always have a good quarterback room. I love what I’m seeing from Coach Day’s offense, and it really interests me. If I’m going up north it’s going to be Ohio State.”