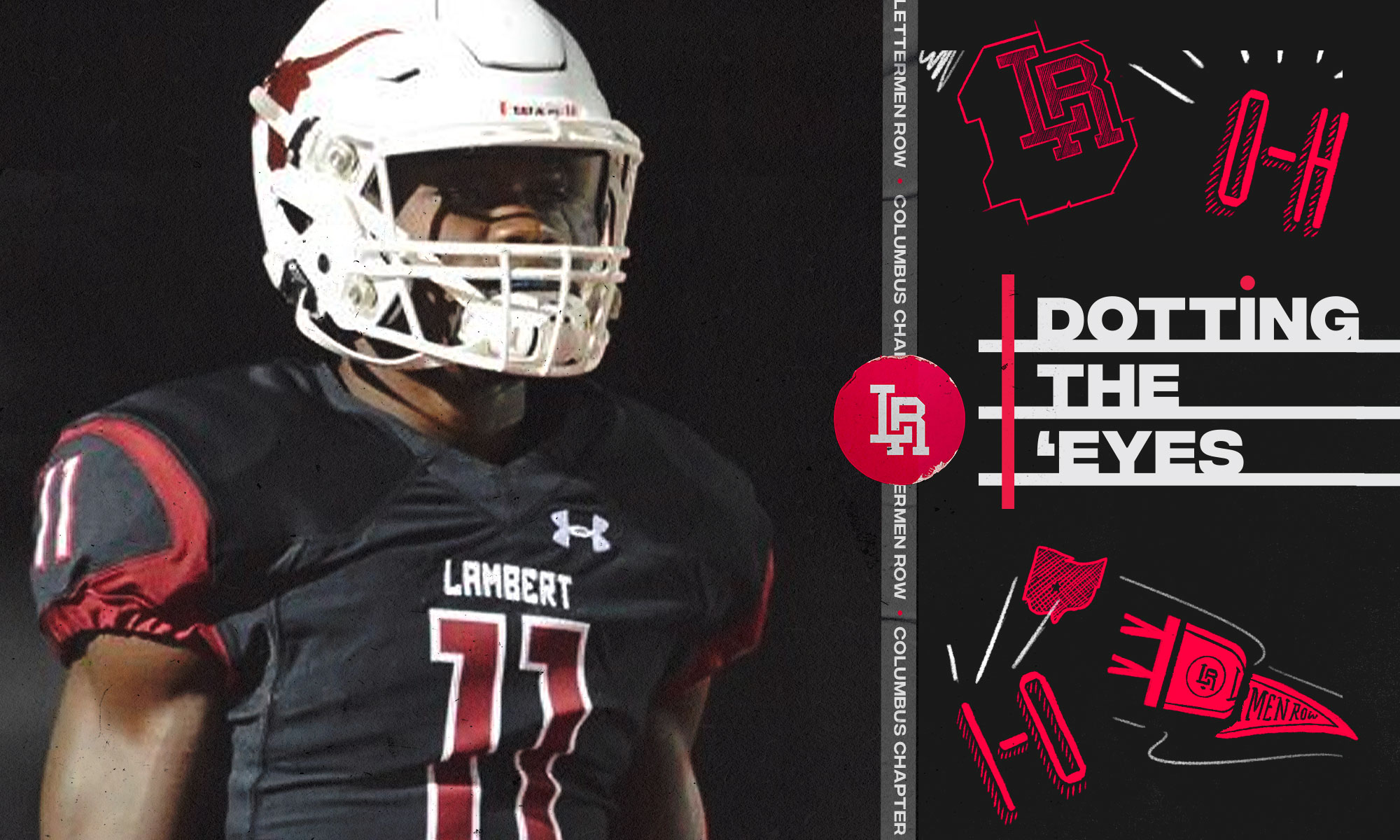 Kojo Antwi has been a top priority for Brian Hartline and Ohio State for months. (Kojo Antwi/Twitter)

Stay in touch or be left out because Ohio State recruiting is a 24-hour, seven-day-per-week obsession. What’s the latest news as the Buckeyes build for the future? Get that and more Sunday through Thursday on Lettermen Row. Today we’re catching up with Kojo Antwi and wondering if time is running out for Ohio State in the recruitment of Malachi Nelson.

The buzz around Kojo Antwi has been all over the place these last few months. But the Lambert (Suwanee, Ga.) High School standout has been a top target for Ohio State since last year, and he’ll make an official visit to Columbus in June.

The Buckeyes have been keeping up with the 6-foot-1, 185-pound Antwi thanks to two of their 2022 commitments: Caleb Burton and Kyion Grayes.

“Me and Kyion were texting last week,” Antwi told Lettermen Row. “Me, Caleb and Kyion all hopped on a Zoom about two weeks ago to talk ball, too. We did that with one of Coach Hartline’s assistants.”

Being in Georgia and having ties to Texas A&M, it’s thought that the Buckeyes are probably running third in the Antwi recruitment right now. That’s why it’s so important that the two Ohio State commitments let him know he’s a priority for them as well as the coaches in Columbus.

“It obviously matters, getting to know your potential teammates,” he said. “Seeing who they are as a person and stuff like that. It’s important because you’re going to be around your teammates all the time.”

Antwi will be at Ohio State the weekend of June 18. He was hoping to arrange his visit at the same time as Burton and Grayes, but it didn’t work out that way.

“At first Caleb said he would be on my visit in the third week,” Antwi said. “Then everybody just decided to go the first week in June, so that changed.”

The country’s No. 13-ranked receiver will be at Georgia the weekend of June 4. The Buckeyes will have to get through his two big visits to Georgia and Texas A&M before his planned visit to Ohio State. For a moment or two back in early March, that visit didn’t seem likely. Recruiting fans may recall that Antwi had listed a top-three schools list of Texas A&M, Georgia and Alabama and actually planned a commitment date. A day later, he reversed his plans.

“Ohio State is not out of it, I promise,” Antwi said. “I’m pushing my commitment back.”

Antwi and C.J. Williams are two of the biggest targets remaining for the Buckeyes at wide receiver in 2022.

Time running out for Ohio State with lone 2023 QB offer

The Buckeyes have only offered one 2023 quarterback, but time may be running out for them to really get into the race for Malachi Nelson.

The Los Alamitos (Calif.) High School quarterback will make a trio of pivotal visits this summer to Clemson, Oklahoma and USC. Those visits may end up telling the tale of his recruitment. When asked by Lettermen Row if he felt a decision would likely come soon after those trips, his response was telling.

“That sounds right to me,” Nelson told Lettermen Row. “I can try and get all the wide receivers in my class to come with me.”

Ohio State hasn’t hosted Nelson previously and will have to push pretty hard to make one happen. The 6-foot-3, 180-pound sophomore still has a good relationship with the Buckeyes, though.

“I still have a great relationship with those guys,” he said. “I might try to get out there this summer as well if I have time. I still talk to those guys heavily.”

On Wednesday we highlighted a pair of 2023 stars from the state of Florida who set visits to Ohio State for June. Two more big-name prospects announced their intentions to do the same.

Payton Kirkland, who was highlighted on Birminology this week, was the first. He tweeted that he’ll make his trip to Columbus on June 22-23. Kirkland also announced that he’d be making trips to Florida and Texas A&M in June. He told Lettermen Row on Birminology that he doesn’t expect to be home at all during the month of June. The 6-foot-7, 315-pound Kirkland plays at Dr. Phillips (Orlando) High School but is originally from Chicago.

5-star 2023 defensive end Malik Bryant will also visit Ohio State that weekend. He’s been in regular contact with Tony Alford, and to this point it’s been the Buckeyes running backs coach leading the way in his recruitment. That’s likely to change in a major way when Bryant gets in front of Larry Johnson for the first time. He’s originally from Orlando.

June is shaping up to be the busiest month in recent memory on the recruiting front. The extended dead period has everyone in a mad dash to make visits, and it appears that Ohio State will be able to have some form of recruiting camps for workout purposes. That’s going to be an important piece of the puzzle for Ryan Day, Mark Pantoni and the rest of the Buckeyes recruiting machine.

The Buckeyes announced that they will have six different one-day camps on campus. The details for those are still up in the air, but it’s a promising development for the summer.