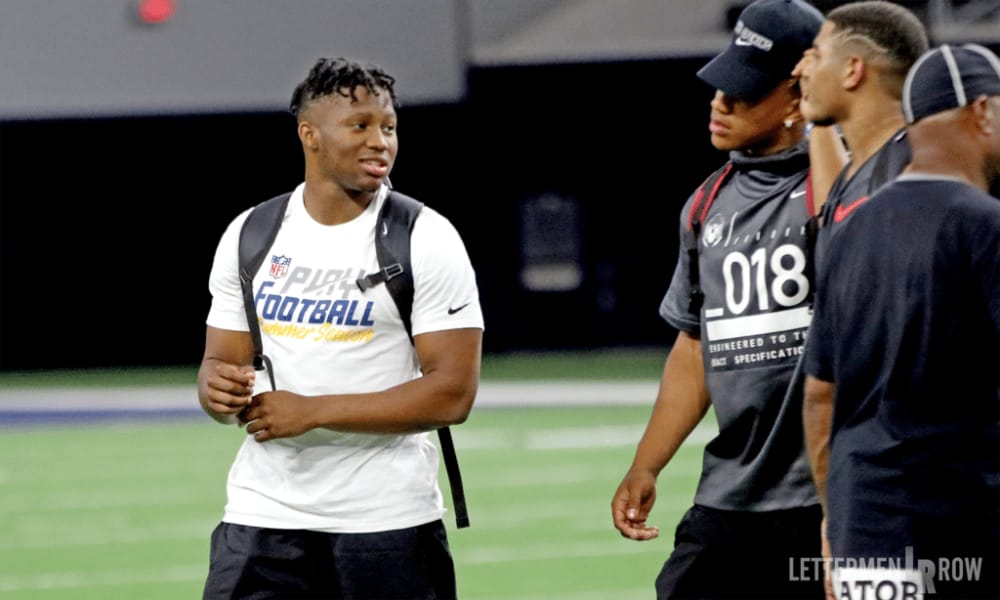 Luke Wypler’s pending decision and changes in the wind

So, about that Luke Wypler crystal ball.

That, friends, is the nature of recruiting in the year 2018. On Thursday, multiple sources indicated serious positivity regarding the Buckeyes and the country’s third-ranked 2020 offensive guard. But by Friday morning, the winds had shifted considerably, and now it’s the Cardinal that seem to be in the lead position for his commitment, which could come as soon as this weekend. All those winds are solid sources, too. But for some reason, though Wypler isn’t somebody to play games, I just can’t bring myself to believe it entirely.

Recruiting is an inexact science, of course, but we do the best we can to analyze available data. That includes conversations with the player himself, those close to him, coaches, other folks in the recruiting business – all to come up with the right answer. Occasionally, there is a shift that occurs which throws everything for a loop.

In this case, I don’t think based on conversations with the 6-foot-4, 285-pound Wypler that the player in question is a troll or anything of that nature. So when data changes that drastically, it’s a pretty good indicator of where things are heading.

It’s early for the Class of 2020, but Wypler is a key part that the Buckeyes would like to lock in early. Losing him to Stanford would hurt, though it’s hard to blame a kid for choosing what the Cardinal have to offer.

But it’s also very hard to pick against the Buckeyes in this scenario, considering their relationships with him, from coaches to commits. I’m going to keep my crystal ball on Ohio State and go down with the ship here.

Ohio State has running back Sampson James committed and Steele Chambers hoping to play the position as well. But the Buckeyes have not yet stopped pursuing IMG Academy 2019 running back Noah Cain, according to the 4-star prospect.

“Ohio State told me before those backs committed, and I was fine with that,” Cain said earlier this week at The Opening. “[Running backs coach] Alford knows I’m committing in December, Coach [Urban] Meyer told me that they’ve got two dudes that want to commit and they can’t tell a kid no.

“I was completely fine with that. They’re still recruiting me as if they don’t have anybody. Like I said, it’s going to be tough to leave them out, but I’m really looking for the best for me.”

Cain’s words are important. The Buckeyes lost out on 4-star prospect Devyn Ford to Penn State late in the spring, and the rumors were that Ford’s camp believed Chambers was a running back — despite my projection that he starts his career at linebacker. Cain’s understanding that a late decision on his part means every school he’s considering will likely have another tailback shows real insight into the process.

“I’ve always known the other top schools are going to take a [running] back, because they have to. If I don’t go there, they have to,” he said. “That’s their job, especially with my decision coming late because I want to see what happens with all these dudes.”

A final five or six schools are coming soon for Cain, and it’s hard to tell if Ohio State will be in the equation. Texas, LSU, Oklahoma, Clemson, Georgia, Auburn and a handful of other programs are all in the mix.

“The love is never lost with Ohio State,” he said. “I’m into who can develop me, help me be a first-round draft pick, who can help me achieve my academic goals. It’s really about that.”

In a room full of 166 top high school football players, it can be a little bit difficult to stand out.

That was not a problem for Salt Lake City (Utah) East defensive tackle Siaki Ika. At 6-foot-3 and 347 pounds, Ika was among the biggest players in attendance — and his performance was even bigger. He dominated rep after rep, including a handful of them against Ohio State commitment and Offensive Line MVP Harry Miller.

The country’s 11th-ranked defensive tackle in the Class of 2019, who has a 247Sports.com crystal ball reading 100-percent Alabama, was glad to have the chance to compete at The Star in Frisco, Texas.

“Everyone comes in with stats and stars,” he said. “At the end of the day, it doesn’t matter. Over here is the best of the best, I’m just glad to compete against some of the best in the nation.”

Ika does not have an offer from Ohio State, but he actually did compete and visit with the Buckeyes in the summer of 2017.

“I went to a camp last summer, I met [defensive line] coach [Larry] Johnson and talked a bit,” he said. “They had sent me a flyer, and I went to the camp. It was a fun camp, he was a great guy. Ohio State has always been a top program and I’d love to hear from them.”

The Buckeyes do not have a defensive tackle committed in 2019, and at least from my vantage point, if they have a chance to get involved with Ika, they should. He’s incredibly impressive.

Buckeyes in Top 10 for Walter Rouse

There are few positions more important for Ohio State in the Class of 2019 right now than offensive tackle. Because of that, few prospects are more important than Washington (D.C.) Sidwell Friends School 3-star prospect Walter Rouse. On Thursday night, he announced his Top 10 schools and Ohio State made the cut.

As a student athlete, I am grateful, focused and excited to begin this next step towards my final decision. These are the 10 schools I will be considering moving forward. S/O to @savageedits15 for the edit! pic.twitter.com/jgMwjp5roy

Ohio State would like to add at least one more tackle in the Class of 2019.