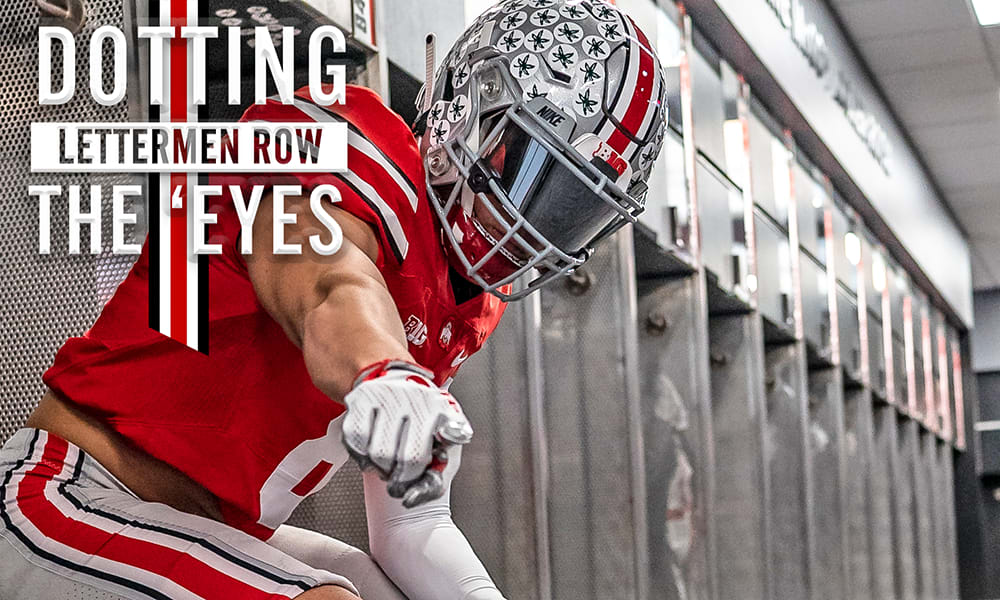 Stay in touch or be left out because Ohio State recruiting is a 24-hour, seven-day-per-week obsession. What’s the latest news as the Buckeyes build for the future? Get that and more Sunday through Thursday on Lettermen Row. Today’s update checks in with Tucson’s Lathan Ransom following his first visit to Ohio State and tries to make sense of the Buckeyes tight end options in 2020.

Ohio State is trying hard to make itself at home recruiting in Arizona, and it got its first chance to impress one of that state’s best players on Sunday. Salpointe Catholic (Tucson) 4-star safety Lathan Ransom visited on Sunday and spent a full day at Ohio State.

“I got great vibes,” he said. “Everything stood out. From the culture that [coach Ryan] Day is creating and what [defensive coordinator Jeff] Hafley is bringing from the NFL to their interest in me and how they not only take football seriously but also academics.

“The campus was beautiful. I loved how close it was to the city and how it surrounded the stadium. It’s not too big at all.”

The approximately eight-hour long visit came after a Saturday visit to Notre Dame. Ransom, the country’s 10th-ranked safety, was flying back home to Arizona from South Bend late Sunday night. He’s used to extreme weather conditions living in Arizona, and he admitted that the incredibly windy conditions on Sunday were interesting. But colder weather isn’t going to lessen his interest in the Buckeyes.

“The wind was crazy,” he said. “But I deal with extreme heat all the time. I would have to get used to the conditions.”

Most of the day was spent inside, of course — and with the Ohio State coach. It was not the first meeting with Day, who offered the 6-foot-2, 200-pound prospect in person last month.

“I like Coach Day a lot,” Ransom said. “I had already met him before, because he offered me in person, but I like what he stands for. He wants to create a brotherhood at Ohio State, and I also like how he cares for the players there.”

Ransom is a teammate of 5-star tailback Bijan Robinson, who is one of the Buckeyes top overall targets in 2020. And he’ll be giving a very positive review of the visit to Robinson.

“I’ll tell him it was a great experience,” Ransom said. “He needs to see it for himself. Ohio State lands toward the top of my list.”

Ohio State legacy Luke Lachey has started to see his recruiting star rise a bit. The 6-foot-6, 215-pound tight end from Grandview Heights High School was recently offered by Michigan State and now has 16 offers. He does not yet have one from Ohio State, but he told Lettermen Row he’s continued to stay in contact with the coaching staff.

“There has been contact between us,” Lachey said. “I talk to Coach Day and [tight ends] Coach [Kevin] Wilson most often. Normally just over text. The message to me is to just keep getting stronger and eating a lot. They really like my explosiveness from watching basketball practices and games.”

Lachey’s father, Jim, is part of the program’s official radio team, so he’s got a unique opportunity to have direct conversations about his son and the Ohio State recruiting efforts. Oftentimes, waiting for an offer like Ohio State’s is a tough thing to deal with for a legacy recruit, but it’s been made easier by hearing the coaching staff mention the country’s 19th-ranked tight end.

“My dad is handling [the wait] good,” Ohio’s third-ranked tight end said. “With him being at Ohio State a lot, he gets to talk to Coach Day every once in a while and they bring me up, so I think that helps him.”

Lachey himself is trying to be patient. He’s in no hurry to make a college decision and expects to get back to Ohio State this spring and summer in an attempt to keep presenting himself to Day’s staff. He’s a fan of what he’s seen and heard from the new coach.

“I really like how he is running his program. He told me that he will be using the tight ends more than they have been recently, and that makes me excited to see it with all the talent they have there,” he said. “Coach Day is just a down to earth guy, and I always have a great time speaking to him. The last time I made a visit was the last practice of open recruiting before Christmas. I plan on going again this spring.”

An offer from the Buckeyes would certainly change the recruitment of Lachey, and he thinks he can use the example of other Columbus-area prospects to keep things in perspective.

“Tim Hinton told me a few [Ohio] guys got offered later than others, like Brendon White,” Lachey said. “I’ve been working hard, and they know how much I want it. I just have to keep working and see how things end up.”

Ohio State is likely to take two tight ends in the Class of 2020, and a recently offered prospect from Connecticut is set to visit the school on March 8.

“I had been talking to Ohio State for about a month,” Noble and Greenough School (Dedham, Mass.) 3-star Cam Large told Lettermen Row when he was offered on Jan. 31. “[An Ohio State offer] has a huge impact on me. This was always one of the schools I saw as a dream school when I was younger. It’s incredible to have now received an offer from them, to have the chance to play on the stage I always dreamed of.”

Large, 6-foot-5 and 240-pounds, plays defensive end as well as tight end and has 16 offers, adding Notre Dame to that list over last weekend. He’s excited about getting to Columbus in two weeks.

“I’m going to Ohio State on March 8th,” he said. “There’s not one thing I’m really most excited to see, I’m just so pumped to see it all.”

Lukas Ungar has Buckeyes in top 5

There’s still no plan for a visit to Columbus as the country’s sixth-ranked tight end finishes up basketball season. He’s hoping to squeeze in a trip soon, but lacrosse starts this week and that could throw a wrench into those travel plans. The Morristown, N.J. standout sees a lot of successful players making their way from the Garden State to Columbus.

“New Jersey guys tend to have a lot of success at Ohio State,” Ungar told Lettermen Row. “I feel my style of play would fit well in their offense.”

The Buckeyes just need to fit into Ungar’s schedule.