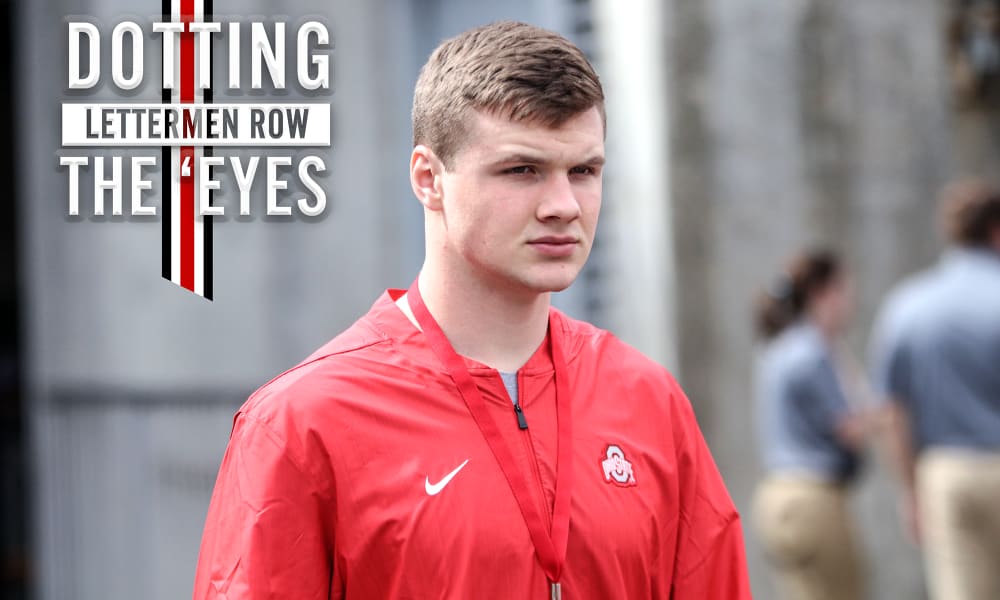 Kyle McCord could be the 2021 quarterback for Ohio State, but he's not ready to commit yet. (Birm/Lettermen Row)

Stay in touch or be left out because Ohio State recruiting is a 24-hour, seven-day-per-week obsession. What’s the latest news as the Buckeyes build for the future? Get that and more Sunday through Thursday on Lettermen Row. Sunday’s update has conversations with Kyle McCord about his weekend visit and Ironton 2021 linebacker Reid Carrico.

Ohio State has its sights on a 2021 quarterback, and though it didn’t happen this weekend, a possible commitment from St. Joseph’s Prep (Philadelphia) 4-star prospect Kyle McCord could be coming in the near future.

“I wanted to hold off for now — Ohio State is still my top school in the process, but I want to take a couple more visits before I commit anywhere,” McCord told Lettermen Row after this three-day visit to Columbus. “It was hard not to commit on the spot given that Ohio State is such a high-caliber program, but I felt it was best to wait a little longer. I think I’ll announce my college commitment in May or June.”

Before that decision comes, McCord needs to make a couple of other visits. It’s the biggest decision of his young life, and there’s no reason to hurry.

“I need to get to Texas A&M and Clemson,” he said. “Maybe Penn State.”

Other trips notwithstanding, the country’s eighth-ranked pro-style quarterback is very high on Ohio State.

Ryan Day’s influence continues to be felt in the recruitment of McCord.

“I really like Coach Day as a coach, but on top of that he’s an even better man off the field,” McCord said. “I feel like he would do a great job preparing me for the next level. A bunch of his concepts are straight from the NFL, and the list of guys he’s coached is ridiculous. I feel like I fit his system well, and we are starting to build a great relationship.”

Ohio State quarterbacks coach Mike Yurcich has been very heavily involved with McCord as well and will go see the 6-foot-4, 195-pound sophomore in May.

The Buckeyes continue to waste no time recruiting inside of Ohio’s borders. Just days after hosting Ironton linebacker Reid Carrico for the first time, Ohio State offered the 2021 linebacker during his stop at the school on Saturday morning.

So thankful to receive an offer to The Ohio State University!! #GoBucks pic.twitter.com/Y0qqm2lCXB

“It’s pretty insane,” Carrico said. “I wasn’t expecting that at all.”

A 6-foot-3. 220-pound linebacker, Carrico is Ohio’s ninth-ranked player in 2021 and instantly becomes a likely choice to become an Ohio State commitment. That isn’t going to happen immediately — despite his lifelong affinity for the school.

“I didn’t know what to say,” he said. “I’m excited for an opportunity to play at the next level, but my job is to play good football, you know? I haven’t seen all the schools I’m interested in, but I absolutely love Ohio State.”

A handful of schools like Penn State, Notre Dame, LSU and Michigan State are likely to receive visits soon from Carrico.

No commitment yet for Najee Story after Ohio State visit

Another major Ohio prospect in the Class of 2021 with an offer from the Buckeyes held off on committing during his spring game visit as well. For Solon’s Najee Story the issue seems to remain simple: More of his family needs to see the Ohio State program up close.

“It felt great down there,” Story told Lettermen Row. “It was my first time in the Shoe. I can’t think about committing until my mom and sisters can meet the coaches and talk with them.” 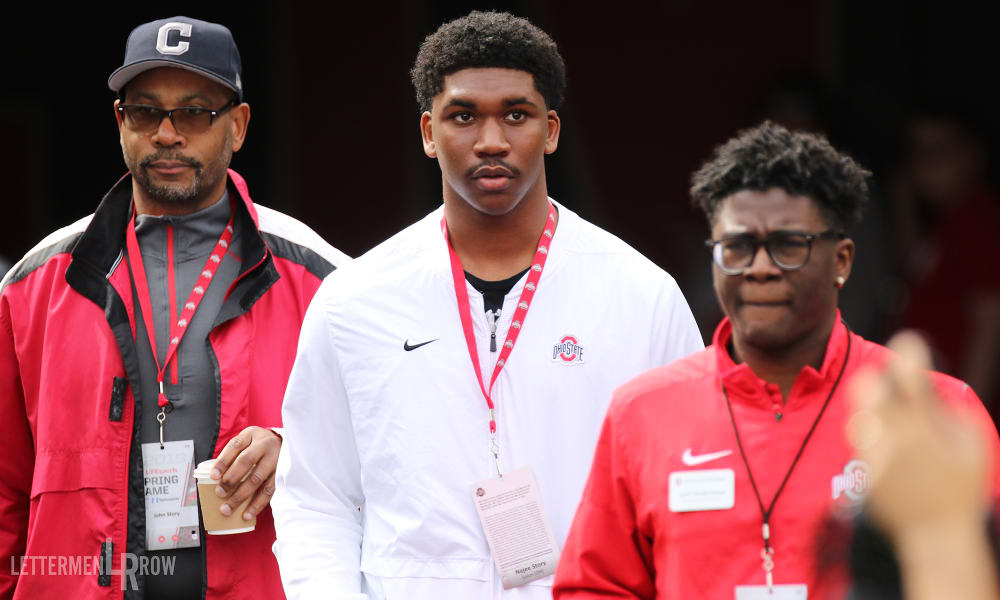 “We talked to some guys and built better relationships with coaches and saw more of the facilities,” he said. “My dad liked it a lot. I’m getting more comfortable there. Unfortunately, my mom couldn’t come down this time, so I’m going to have to get her down to talk to Coach Johnson.”

With Ohio State freshman Jaedon LeDee in the transfer portal, the need for Chris Holtmann and the Buckeyes to land another player in the Class of 2019 became pretty large.

As usual, Holtmann and his coaching staff have delivered. On Sunday, rising-prospect Ibrahim Diallo, a 3-star player from Prolific Prep (Napa, Calif.) committed to the Buckeyes.

After months of careful consideration I have decided to commit to Ohio State University @OhioStateHoops I want to thank all the coaches who have recruited me during the recruitment process. My Family and I are excited about the next chapter in my life. 🅾️ pic.twitter.com/IWmZhpWHsi

Diallo is the country’s 41st-ranked center in the Class of 2019 and provides Ohio State with much-needed interior help and a big, talented defender who will help spell star Kaleb Wesson. He could also provide him a worthwhile opponent in practice.

With the addition of Diallo, the 2019 Ohio State basketball recruiting class moves up to No. 9 in the national rankings.