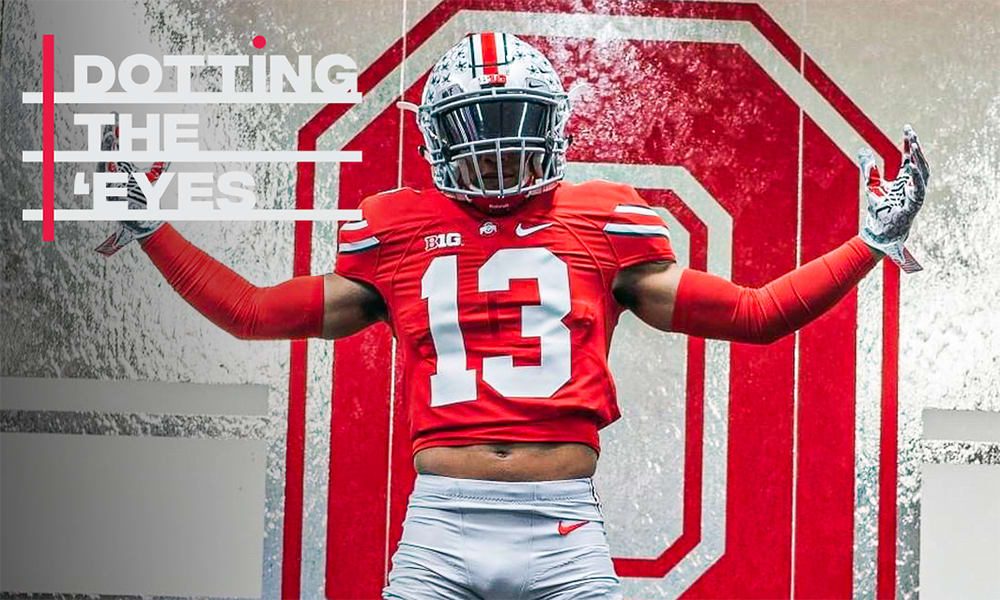 Stay in touch or be left out because Ohio State recruiting is a 24-hour, seven-day-per-week obsession. What’s the latest news as the Buckeyes build for the future? Get that and more Sunday through Thursday on Lettermen Row. Tuesday, we look at the impact of Kerry Coombs hiring as it pertains to a number of 2021 targets and of course, 2020 commitment Cameron Martinez.

The much-anticipated meeting between newly-rehired Ohio State assistant coach Kerry Coombs and 2020 commitment Cameron Martinez should happen on Wednesday. The pair had their first conversation on Tuesday afternoon.

“It went good,” Martinez said. “He was fired up, and I’m his first priority. He wanted to see me as soon as he could, and tomorrow works better. So, it’s looking like he’ll be up Wednesday. I’m excited to meet him. That’s all I can really say.”

The relationship between Martinez and Coombs and how quickly it builds will likely determine whether or not the 4-star athlete from Muskegon (Mich.) takes a real look at any other schools between now and Feb. 5, the next time 2020 athletes can sign a Letter of Intent. Coombs is expected to spend time both at Muskegon High School and at home with Martinez and his family.

Ohio State had hoped to have Coombs on the recruiting trail as early as Tuesday, but it was slowed down a bit by the NCAA and its always restrictive red tape. On Monday, there was an immediate phone call from Ryan Day however as the news of Coombs hiring became official.

“Coach Day called me on Monday,” Martinez said with a laugh. “He might have said something like ‘finally’ when he told me it was happening.”

A number of the country’s top 2021 defensive back prospects have been waiting for word on who would replace Jeff Hafley. And like Martinez, they have already begun to research what Kerry Coombs brings to Ohio State and who he is.

One of those defensive backs is Jaylin Davies, the country’s No. 9-ranked cornerback from Santa Ana (Calif.) Mater Dei High School. Davies has been hearing from Ryan Day weekly, and now he’s looking forward to talking to Coombs, the man he says helped turn Ohio State into DBU.

“I’m hyped about it,” Davies said. “I read an article on him and realized that he really established ‘DBU’ at Ohio State. He’s kind of a big deal.”

Davies has also seen the reports of former players weighing in on Coombs and that their feedback reinforces his own.

“He’s got a good reputation with former players,” Davies said. “I’ve done my homework on him.”

The 6-foot, 170-pound Davies said he and Day are talking regularly and working toward a visit date in the near future.

Ryan Day told recruits, their families and coaches that they’d replace Jeff Hafley with “the best coach in America,” because that is what the expectation is and will be at a school like Ohio State.

That has been the message that Robert Steeples, the head coach at St. Louis (Mo.) Desmet has been giving to his star cornerback Jakailin Johnson in the wake of Hafley’s departure. Johnson, the country’s No. 5-ranked cornerback, may want to get used to the idea of coaches leaving because it happens all the time — something that Steeples, who played with four NFL teams as a cornerback himself, can attest to.

“I’ve told Jakailin to get familiar with the standard at the schools he’s considering,” Steeples said. “Coaches may leave, but at a place like Ohio State, the next coach will be held to that standard. That’s why you’ve got to look at the entire school.”

Johnson has been looking at Ohio State, and that’s certainly going to continue with Coombs in the fold. Steeples believes that the two-year stint in the NFL will make Coombs even better than he was before because that level requires coaches to adapt to different types of players.

“He’s been able to see so many different skill sets,” Steeples said. “They’re cycling players in and out in the NFL, so his job is not to find guys to fit him, it’s to learn how to use the talent he had. I am sure he’s much more equipped to handle different types of players at the cornerback position now than before.”

Ultimately how the relationship between Coombs and Johnson unfolds will be up to the player, though, and not Steeples. That being the case, it’s helpful that the returning assistant coach is intimately familiar with the Buckeyes.

“He comes as a highly-regarded guy at that position and has a previous relationship with the school which helps,” Steeples said. “Jakailin and I have talked about Ohio State a lot, even before it was Coach Coombs. As far as the relationship is built? It will between them.”

And what about the idea that his star cornerback could be closing in on a decision? That’s been popular fodder of late.

“Any talk about him being ready to commit?” Steeples said. “I think that’s just pure speculation.”

One of Jeff Hafley’s top targets at cornerback in the Class of 2021 was Jordan Hancock from Suwanee (Ga.) North Gwinnett High School.

The 4-star defensive back visited the Buckeyes in late October and told Lettermen Row in November that he was very “comfortable” in Columbus. Last weekend he visited Georgia, one of the many schools that have offered in him in the last three months as he’s risen from under-the-radar recruit to nationally-regarded prospect.

Hafley’s departure changed Hancock’s recruitment a bit — but not his opinion of the Buckeyes.

“It hurt having [Hafley] leave,” Hancock said. “But my opinion of Ohio State is the same. They told me they’d be hiring someone good.”

Ohio State did hire someone good, and Hancock is familiar with him.

“There’s no better feeling than to potentially be coached by the best,” he said. “So, I am very excited about him being hired.”

Coombs used to recruit the Atlanta area for Ohio State, and no doubt his relationships in that area will help him quickly get familiar with Hancock as well.