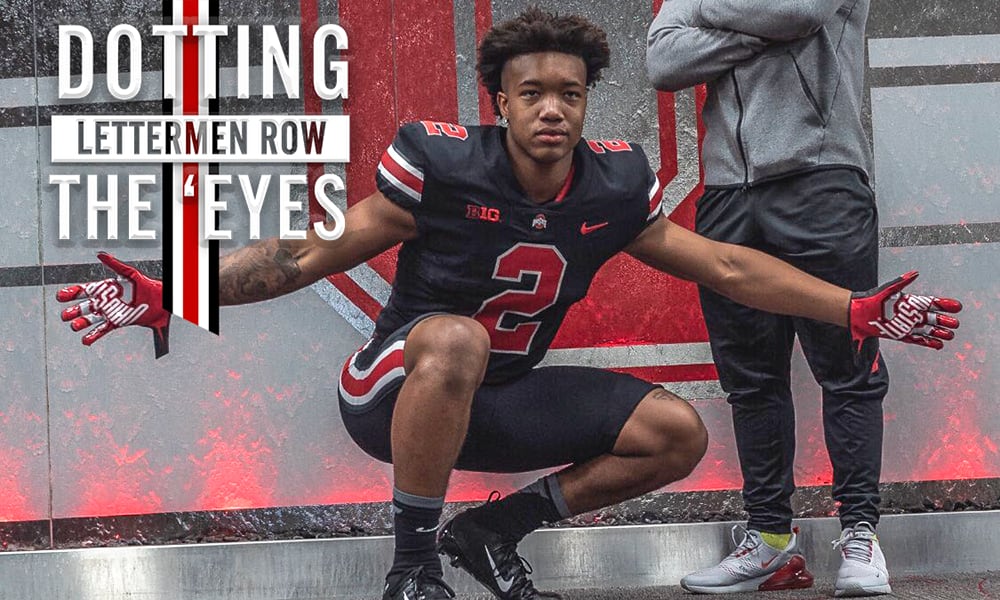 Stay in touch or be left out because Ohio State recruiting is a 24-hour, seven-day-per-week obsession. What’s the latest news as the Buckeyes build for the future? Get that and more Sunday through Thursday on Lettermen Row. Sunday’s update talks about 5-star running back Kendall Milton as well as Michigan defensive back Makari Paige.

Did Ohio State do enough to get official from Kendall Milton?

The country’s second-ranked 2020 running back made his way from California to Columbus on Wednesday night, hopping on a red-eye flight and arriving in the Capital City on Thursday morning. As he landed, Milton announced his presence on Twitter and was immediately welcomed into town by Ohio State commitment Luke Wypler, who had made his way from New Jersey just hours earlier.

“It was a great visit,” Milton told Lettermen Row. “I was able to have great conversations with the coaches. It exceeded my expectations.

“I just came in with open thoughts and the visit was just all-around amazing. They took me in as family, and J.K. Dobbins let me know that when he leaves there’ll be a great opportunity at the running back position.”

The 5-star tailback left Columbus late Saturday night. Now the wait for Ohio State to see if it did enough to impact the recruitment of this major prospect begins.

As of Sunday morning, the belief was very high it had. Multiple sources around the program shared that the visit went “great” and was a hit for the young running back and his family. The Ohio State coaching staff did not hesitate to show Milton and his family that there’s a very open path to a lot of early playing time and went to great lengths to show that the family feel around the program isn’t just lip-service.

“Ryan Day is doing a great job,” Milton said. “Especially continuing the culture at Ohio State. I’ll for sure be back.”

When a return trip to see the Buckeyes happens is up in the air. Milton hasn’t begun to sort out when he’d like to make official visits, but it seems likely Ohio State will earn an official visit from the 6-foot-2, 220-pound running back.

There are a slew of SEC trips upcoming and no decision likely until December. But the Buckeyes are going to be tasked with proving to Milton and his family that things aren’t changing on the field in Columbus as much as they have tried to impress on recruits that the culture isn’t really changing off of it. Oklahoma, Georgia, Alabama, Clemson and of course West Coast programs like USC, Oregon and others are all going to be in the mix here.

Recruiting has a lot of ups and downs, and few things can derail recruiting efforts faster than a coaching change. Ohio State obviously went through a pretty big one recently, and because of that, the Buckeyes have had to try and re-establish relationships with recruits, their families and high school coaches all over the country in a short amount of time.

To this point, with the nation’s sixth-ranked 2020 recruiting class, Ryan Day and his staff with five new assistant coaches have done a nice job maintaining the status quo with most of their top targets, including West Bloomfield (Mich.) 4-star safety Makari Paige.

Paige, the fifth-ranked player in Michigan and the 17th-ranked safety prospect in the country, was back at Ohio State on Friday visiting with Day and his new staff. And Paige said it was made more comfortable because of holdovers like Ohio State director of player personnel Mark Pantoni, who was a major part of his recruiting process with the previous Buckeyes regime.

Paige didn’t arrive in time for an early Friday morning practice, but heard from others in attendance that the energy around the field was “hype.”

There’s no timeline for a decision from Paige, but another visit to Ohio State is likely in the near future. Expect the Buckeyes to also be one of the programs to receive an official visit from the 6-foot-3, 180-pound defensive back.

Ohio State is searching for two tight ends in the Class of 2020, and the Buckeyes search took a pretty sizable hit this weekend when top target Mark Redman, a 4-star prospect Corona Del Mar High School (Newport Beach, Calif.) ended his recruitment by committing to Washington.

Ohio State has a number of tight end offers out in the Class of 2020, but I continue to believe it doesn’t need to look too far from home in order to find a pair of really good tight end prospects. Recruiting the state of Ohio is a big deal in this cycle, and if Ohio State wants two tight ends, they could do a lot worse than the guys inside of Ohio’s borders.

Caden Clark is likely out of the picture, but Clay Caudill, Luke Lachey Sam Daugstrup and Joe Royer have all been on campus recently. And though none of that group has an offer yet, it wouldn’t be a huge surprise if both tight ends in the Class of 2020 come from that foursome of talents.

Jordan Morant does not make visits

One of the weekend’s most important scheduled visitors to both Ohio State and Michigan was Bergen Catholic (Oradell, N.J.) 4-star safety Jordan Morant. The country’s top-ranked safety did not end making either trip and instead stayed home in The Garden State while dealing with a family issue that prevented the visits.

Expect both of those trips to be rescheduled soon.