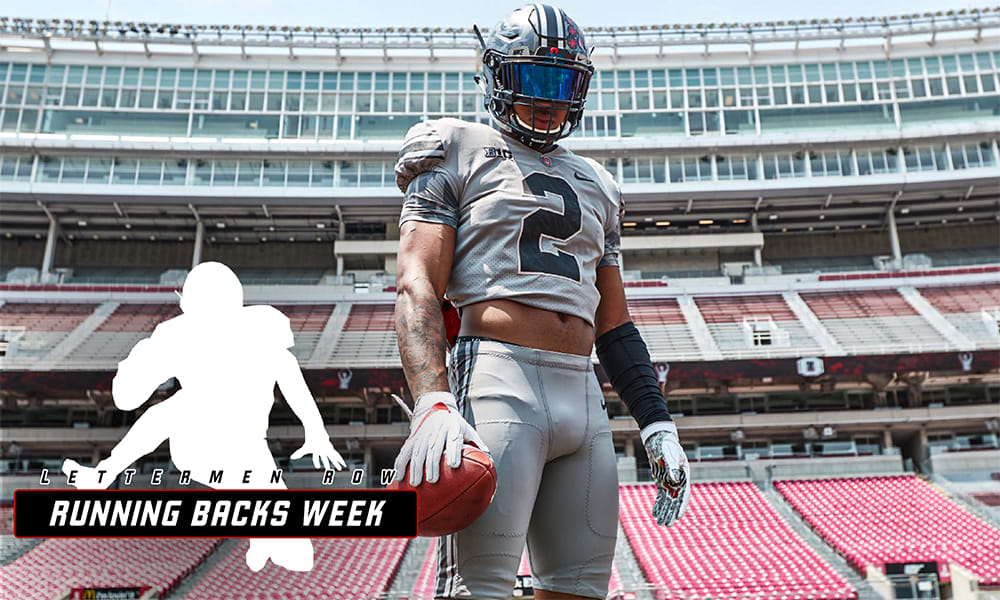 Kendall Milton made his official visit to Ohio State, and the Buckeyes are fighting SEC teams to land him. (Kendall Milton/Twitter)

COLUMBUS — Ohio State needs a running back or two in the Class of 2020.

We’ve talked about it quite a bit here at Lettermen Row over the last few months. And in doing so we’ve mentioned the same pair of names, over and over.

And yes, whether or not J.K. Dobbins returns for his senior season can shape exactly how things play out, but it’s safe to assume that the need for two tailbacks in this cycle isn’t changing.

So where does Ohio State turn to make that happen? Let’s give the running back board a look.

Welcome to the top of the board for Ohio State. Yes, it’s Kendall Milton and Bijan Robinson as it has been for months. And there’s no reason to expect that to change until one or both of these 5-star talents makes a college decision, either saying yes to the Buckeyes or forcing them to look at other options.

Milton, the country’s third-ranked running back, took his official visit to Ohio State early in June. Robinson, the fourth-ranked tailback, visits this weekend. Ohio State is up against LSU, Georgia and Alabama for Milton and fighting against Texas, UCLA, Arizona, USC and others for Robinson.

There’s a decision expected from Milton by the middle of July. But there is no timeline for Robinson, who has handled his recruitment as privately as anyone in the 2020 class has. Each player continues to consider Ohio State very seriously and will be at the top of the board as target No. 1A and 1B — in no particular order — until they’re off it.

Oh yeah, the country’s number-one ranked running back, Zachary Evans, has the Buckeyes in his final five schools as well. But that’s just fluff, so don’t pay attention to that.

Who else is a real option around the country?

There are other national names to know if things go haywire with both Kendall Milton and Bijan Robinson, even if those players aren’t nearly as well-known while the majority of our focus has been on the 5-stars.

Florida 4-star Lawrance Toafili visited Ohio State in the spring, and he’s recently been to Michigan. So he’s a guy who is at least considering a move away from the south. The same can be said for Jaylon Knighton, a guy who has captured the attention of the Buckeyes coaching staff but who may not be the every down, bellcow back that’s needed as the headliner in this class.

Ohio State is hosting Baltimore’s Blake Corum for an official visit over the weekend, and he’s an intriguing running back. Most indicators point to him favoring Michigan at this point. Corum is the country’s 17th-ranked tailback, one spot behind Washington 4-star Sam Adams, who makes his official visit with the Buckeyes on the June 21 weekend. Adams is the teammate of Ohio State commitment Gee Scott at Eastside Catholic High School in Sammamish, just outside of Seattle.

The Buckeyes were at one time considered an early favorite for Don Bosco Prep (New Jersey) 4-star running back Jalen Berger, and he had a good visit to the school in May. He’s the nation’s ninth-ranked running back and just recently visited Alabama.

Exactly how these guys shake out on the board for Ohio State is the big question as they each fit different roles in an offense.

In-state options are there for Ohio State, too

Looking for an ideal result in 2020? I think it’d be this: The Buckeyes find a way to secure one of the two fellows mentioned on top of the board and then complement that 5-star with another really good, in-state tailback.

The most likely players to fit that bill are Akron Archbishop Hoban’s Deamonte Trayanum, 4-star Dublin Coffman athlete Mike Drennen and Winton Woods 3-star standout Miyan Williams. A pair of really talented running backs, Jutahn McClain and Torrance Davis, each committed to Kentucky in the last week, and though neither had been a priority to this point for Ohio State, they are both kids that the program may want to keep an eye on because they’re a pretty solid one-two punch and provide two very different skillsets.

Trayanum will make an official visit to Ohio State next week and Williams will camp for the Buckeyes on Saturday, a camp setting that could go a long way toward his goal of landing an offer.