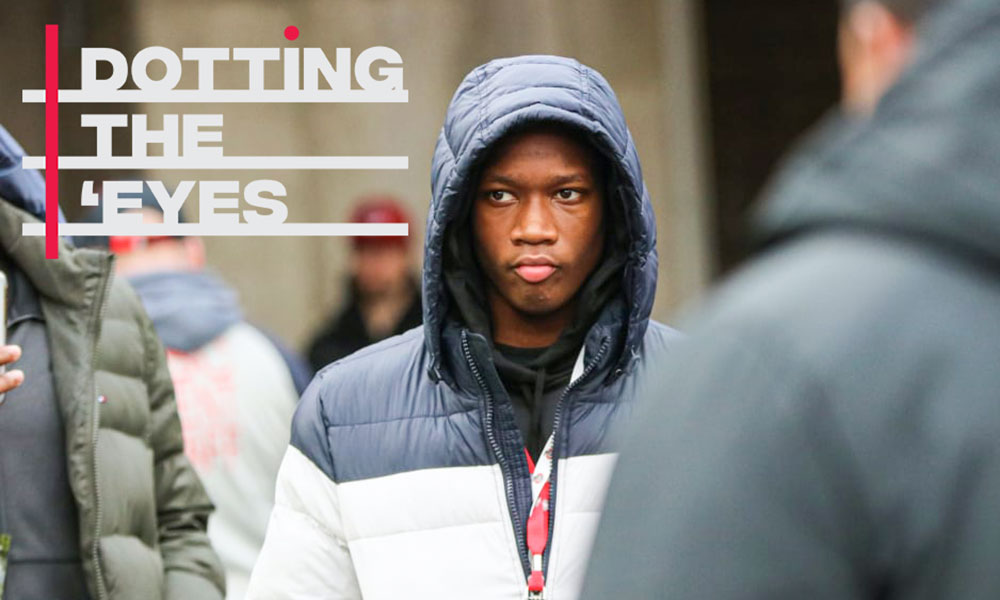 Kalen King visited Ohio State in November and is hoping to return for another Buckeyes visit in March. (Birm/Lettermen Row)

Stay in touch or be left out because Ohio State recruiting is a 24-hour, seven-day-per-week obsession. What’s the latest news as the Buckeyes build for the future? Get that and more Sunday through Thursday on Lettermen Row. Wednesday’s notebook checks in on a couple of young Michigan standouts and updates the pursuit of a big-time Texas offensive lineman.

Kerry Coombs is getting back to work in the state of Michigan, including regular check-ins at a few of his favorite old haunts — like Detroit Cass Tech. One of the Technicians top prospects is 2021 cornerback Kalen King, a 4-star defensive back who has visited Ohio State a couple of times in the last year. The 5-foot-11, 170-pound corner has been in contact with Coombs since the energetic defensive coordinator’s return to the program.

“Coach Coombs and I have been texting,” King told Lettermen Row. “He was by the school in January. I like him. He’s a very cool guy, and you can tell that he knows what he’s talking about.”

King is coached by legendary Motor City prep coach Thomas Wilcher, who is a former teammate of Jim Harbaugh at Michigan. There’s no pushback against Coombs inside of Cass Tech — King says Wilcher “likes” the Buckeyes assistant — but for things to pick up in the recruitment between the two sides there, will need to be some more in-person conversation. Coombs is apparently working to make that happen in March.

“He has been asking me if I can come down this spring,” King said. “And that’d definitely something I am trying to do. Coach Coombs says he really loves my film.”

Ohio State has not offered King. Getting back to Columbus and growing his relationship with the Buckeyes is something he’ll have to do if he wants an offer from his “dream school.”

Ohio State getting to know another West Bloomfield standout

Another Michigan standout who is hoping to get to Columbus soon is 2022 athlete Dillon Tatum, a rising star at powerhouse West Bloomfield. The 5-foot-11, 180-pound sophomore is the backup tailback for the Lakers, playing behind Buckeyes 2021 priority target Donovan Edwards, and has already racked up 19 offers thanks to the incredible exposure that playing for West Bloomfield brings.

Edwards is expected to visit Ohio State next week, and Tatum is hoping to tag along.

“I’ve called [Ohio State running backs] Coach [Tony] Alford and Coach [Kerry] Coombs on their staff,” Tatum said. “They have great things to say about how I can make an impact at Ohio State.

“They haven’t offered yet, but I’m looking forward to building a great relationship with the Ohio State staff and the players there. I’ve not been there yet, but I am hoping to visit in early March. Everyone has said nothing but great things about Ohio State, so I’m looking forward to getting on campus and getting a real tour around the place and meeting the rest of the staff.”

Unsurprisingly, the first impression made by Coombs has been a good one. Tatum is hoping that turns into an offer from the Buckeyes next month.

“Hopefully they’ll offer next month when I visit,” he said. “Coach Coombs is an awesome guy. It sucks I can’t really speak to him directly yet, but he’s a great coach who focuses on putting guys in the league and winning every year.”

Though he’s listed as a running back on his 247Sports.com profile, Tatum is open to the idea of playing defensive back in college and thinks that is the best path for a potential future with the Buckeyes.

“Most schools are recruiting me as an athlete, because I have potential on both sides of the football,” he told Lettermen Row. “But I see myself as more of a defensive back at Ohio State. There are more opportunities there.”

Ohio State landed Texas offensive lineman Donovan Jackson in the Class of 2021 and is an early favorite for 2022 star Kam Dewberry. The Atascocita (Humble, Texas) High School star calls Jackson one of his close friends, and that relationship could help the Buckeyes in their efforts to recruit the country’s No. 4-ranked sophomore tackle.

Like Jackson, Dewberry grew up watching Ohio State closely, though he doesn’t have the Ohio roots that the Buckeyes 2021 commitment does.

“I watched them all the time growing up,” Dewberry said. “It’s just their colors, the way they played. They were just my favorite.”

Ohio State is hoping that interest translates into real interest in the program. The biggest challenge being faced by both sides is how difficult it is to build a relationship with 2022 prospects right now because NCAA contact rules prohibit direct communication. Ryan Day was inside of Atascocita High School in January in an effort to underscore Ohio State’s interest, and Dewberry is hoping to return the favor with a visit to Columbus.

“I am trying to get to Ohio State soon,” Dewberry said. “Possibly this summer, if I can.”