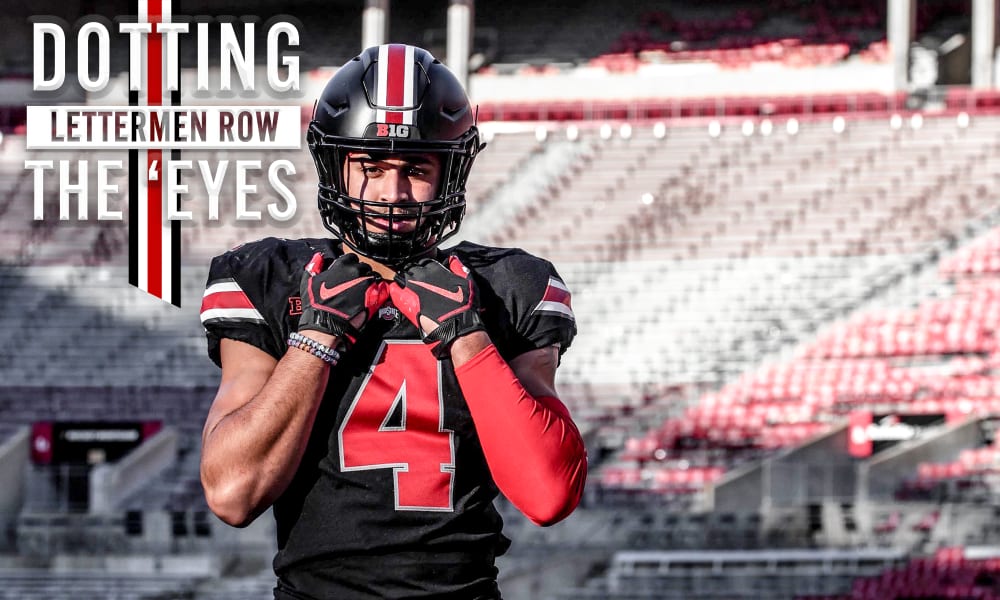 Julian Fleming will not make a planned visit to Georgia ahead of his May 31 commitment date. (Julian Fleming/Courtesy)

Stay in touch or be left out because Ohio State recruiting is a 24-hour, seven-day-per-week obsession. What’s the latest news as the Buckeyes build for the future? Get that and more Sunday through Thursday on Lettermen Row. Today’s edition has an update on Julian Fleming and his upcoming commitment, we also update the recruitment of three key prospects from Cincinnati.

The country’s No. 1-ranked receiver prospect, Julian Fleming, will make his college choice in just about two weeks, announcing his intentions on May 31. As we wrote here at Lettermen Row when that was announced, the timing was curious because the 6-foot-2, 200-pound Fleming had an official visit set to Georgia for the end of May.

“The question from here is whether or not that visit happens unless he’s picking Georgia. It seems unlikely he’d be heading to Athens on the same weekend he makes a college choice in the favor of another school.”

After doing some digging this week, I’ve been able to verify that Fleming will not make an official visit to Georgia and has informed the staff there of that change. Sources close to Fleming’s recruitment have indicated to Lettermen Row that he’ll make his final decision from the group of Alabama, Clemson, Ohio State and Penn State

Staying on the topic of official visits, a trio of top Ohio State targets from Cincinnati have set their plans to get back to Columbus for an official visit. As expected, Paris Johnson, Darrion Henry and Jaheim Thomas will make their visit together.

Three of Ohio’s top four 2020 prospects and teammates at Cincinnati Princeton for their senior seasons, the Queen City prospects will make the trio over the weekend of June 21, multiple sources confirmed to Lettermen Row. That weekend is being set up as one of the defining moments of Ryan Day’s first-full recruiting class at the helm of the program.

With Johnson, Henry and Thomas on the list, here’s how that weekend is shaping up in Columbus with official visitor as of now.

I believe that weekend is likely to have Friday Night Lights as the backdrop at Ohio State for a host of other talented prospects, committed or otherwise. Expect that prospect list to keep growing into a major recruiting weekend.

Ohio State has signed one of the country’s top centers each of the last two recruiting cycles: Matthew Jones (No. 1, 2018) and Harry Miller (No. 2, 2019). The Buckeyes also have a commitment from Luke Wypler (No. 1, 2020) already. Now they’re working on the Class of 2021, and this weekend they will host the nation’s top-ranked center in that class, Damascus (Md.) 4-star Ryan Linthicum.

“I arrive Friday and leave Saturday,” Linthicum, a 6-foot-4 and 275-pound prospect, told Lettermen Row. “Me and my dad.”

Penn State, Oklahoma and Michigan are just a few of the schools that Linthicum has recently visited, so he’s begun to understand what he’s looking for in a program. This visit to Columbus, his first, will prove vital in the efforts for the Buckeyes to land him down the road.

“I need to find somewhere that if I get hurt or I can’t play football anymore, that I would still want to be there,” Linthicum said. “That’s one key factor. I’ve learned what I’ve been looking for in the school and the academic part of the search.”

We first mentioned Corey Wren in early April and suggested that Ohio State could be on the cusp of offering a scholarship to him once it had a chance to properly evaluate him in person.

After a month that saw him add offers from Michigan, Georgia, Nebraska, Baylor and more, that offer from Ohio State came this week for the John Curtis (New Orleans) speedster.

That offer from Hartline came on the heels of the Ohio State wide receivers coach watching the 5-foot-9, 170-pound prospect at practice. Wren, who runs in the 10.4-range in the 100-meter dash, had a chance to show he can catch thanks to a position switch during that practice session — he usually handles the football out of the backfield in a winged-T type of offense.

“I played a lot of free safety today at practice, and he loved my film from the jump,” Wren said. “He just wanted to see me catch some footballs and move around. Now he wants to have a one-on-one workout with me, so I’m going up there for a camp on June 6. It’s going to be exciting working with him.”

The way Hartline handled his approach to Wren has impressed him.

“I really respect [Hartline] taking his time and not just giving me the offer without seeing me,” he said. “It says a lot about the Ohio State program.”

Wren will visit Georgia this coming weekend and also plans to trek to Houston sometime in June.

Does Ohio State have long shot or real shot to land Kendall Milton?
Buckeyes have excellent options at tight end inside of Ohio
Advertisement