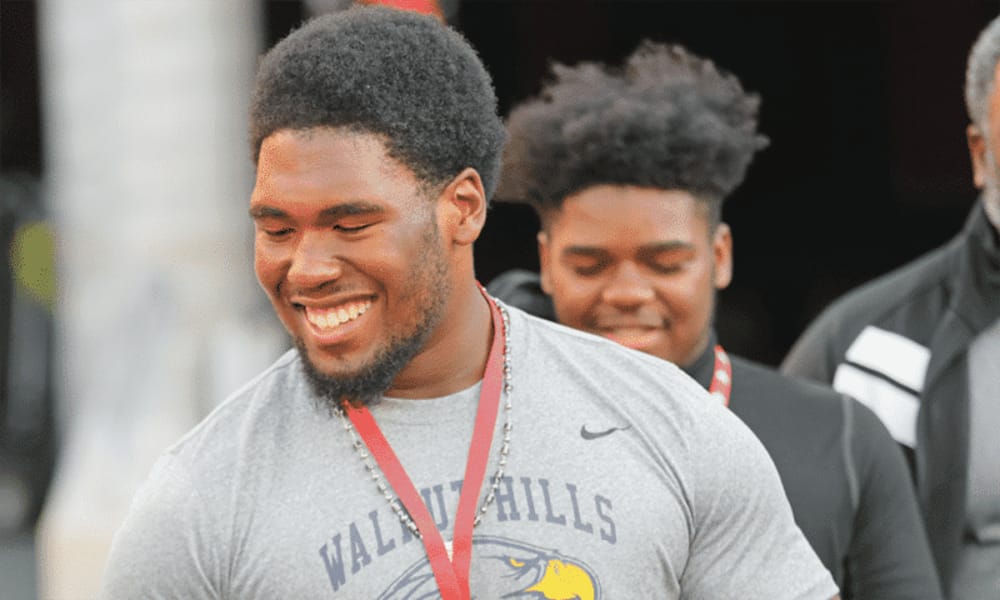 Ohio State is still on the list for 2020 DL Jowon Briggs. (Jowon Briggs/Courtesy)

Ohio State and Notre Dame were at one time considered the top two schools to land Cincinnati Walnut Hills defensive tackle Jowon Briggs, but only of them are among the programs listed on Tuesday by Ohio’s second-ranked 2020 prospect.

If you’ve read any of my previous work at Land of 10, you know that Briggs isn’t the stereotypical football player. He’s extremely introverted, highly intelligent and far more focused on his life outside of the game than most kids his age are — let alone one with his talent. Last summer at the Cleveland regional for Nike’s The Opening, I thought he was the best interior defensive lineman in attendance. But over the course of the last year, he’s stayed about as low-key with his recruitment as any player in the nation.

The Buckeyes do not have a defensive tackle committed yet in 2019, but there’s been almost no discussion about Briggs since his last public visit to Columbus back in January for a junior-day recruiting session.

As it stands right now, despite the Buckeyes inclusion on Briggs’ list, I’d consider it quite an upset if he ended up at Ohio State.

Buckeyes and Bulldogs back to even for Lejond Cavazos?

It’s never easy to land one of the country’s best prospects, and the challenge Ohio State faces in securing a commitment from IMG Academy 2020 defensive back Lejond Cavazos is growing.

Fortunately for the Buckeyes, though, it appears that there will only be two schools in the mix and — and they one of them. The other contender: The Georgia Bulldogs.

Cavazos visted Ohio State for the fourth time on June 12, then headed to Athens two days later for his third trip to Georgia. Those two powerhouse programs are tied at the top of his list.

“It definitely complicated it a lot,” Cavazos said. “Coming off that Ohio State visit I was like, ‘This is the school’ and this and that. Then going to Georgia hearing like kind of the same stuff makes it really a hard decision. They are both really good schools so I don’t know what I am going to do now leading up to a commitment.

“I thought I was going to commit like in a couple of weeks before I go back to school, so it really just made it a lot harder on me.”

Cavazos told Lettermen Row following his Ohio State visit that he had hoped to make a commitment within the next few weeks. That seems to be on hold for now, and an extended recruiting battle between Ohio State and Georgia could be on deck.

He also will watch them closely this fall.

“That is probably what I am going to stick back to doing,” he said.

What’s the best thing he likes now about Ohio State? Georgia? His answer was basically the same for both.

“I would say probably their career plan program they have going on with their players,” Cavazos said. “They set you up to succeed for a life outside of football.”

Check out the whole article from Sentell. It’s worth the read.

Recruiting is a wild game sometimes, and more often than you’d think, there’s a game of “Who actually said what?” played that no one can actually win.

At the center of today’s edition of that game is Michigan State commitment Nick Samac, the country’s 37th-ranked offensive guard and a teammate of current Ohio State pledges Ryan Jacoby and Noah Potter. The hearsay? It’s been reported that Ohio State, fresh off losing out on Cincinnati Anderson offensive lineman Zeke Correll, offered Samac early on Tuesday.

Ohio State had their eyes on a Michigan State commit, but Nick Samac says he's not going anywhere. #GoGreen https://t.co/alp7PFAvOZ

In response to the “offer,” Samac reportedly told the Buckeyes that he was not interested and was 100-percent committed to the Spartans.

Cool story, if it’s real. Ohio’s 46th-ranked player, with two futures Buckeyes for teammates, gets a chance to live out what was probably a life-long dream by going to Ohio State but says no in order to be loyal to the staff that showed him more love, far earlier? That’s awesome in a lot of ways.

But is it real? Who the heck knows, only Samac and whatever Ohio State representative he spoke with on Tuesday know for sure. I know that sources I’ve spoken within Columbus didn’t think an offer was presented on Tuesday, but recruiting conversations regularly get jumbled while all the moving pieces that go into the process are juggled.

I have a theory on what transpired, and I’ll present it as such, knowing full well that my words could be misconstrued as fact, which they are absolutely not.

For my money, here’s what happened: Ohio State reached out to Samac and asked if he’d be interested in the school, and it probably wanted to know if he’d be willing to come to Friday Night Lights and work out so that the staff could evaluate him. The 6-foot-4, 260-pound Samac, knowing Michigan State’s strict policies about taking other visits – especially to a place as hated as Ohio State – let the staff in East Lansing know that the Buckeyes had reached out and told them, “Thanks, but no thanks.” From there, the Spartans staff leaked a little info to trusted media and the story grew from there.

That’s my theory. Whether it’s right or not doesn’t really matter. Samac, who committed to Michigan State on May 27, isn’t expected at Ohio State, so the story has reached its likely conclusion.

“I am really thankful for the offer,” Dixon told Lettermen Row following that camp. “In so many words, [Buckeyes offensive coordinator Ryan] Day let me know that he was impressed and that I had done a great job.”

Now, the 6-foot-5, 210-pound Dixon will get a chance to back that up in front of thousands of Ohio State fans inside of Ohio Stadium on Friday night.

Ohio State 2019 baseball commitment Joey Velasquez could have an interesting decision on his hands. The 6-foot, 205-pound linebacker prospect at Columbus (Ohio) St. Francis De Sales High School has become a sought-after football prospect with offers from five schools, including the Michigan Wolverines. Velasquez camped at Ohio State on June 8 and at Michigan on Monday, and he’s continuing to gather feedback from each school as he considers where his athletic future rests.

“I was the camp MVP at linebacker,” Velasquez told Lettermen Row about his Michigan trip. “They think with my size and speed that I’m a perfect fit for their hybrid position.”

There was no thought of committing to the Wolverines on Monday, though, because the 3-star football prospect headed straight from the football camp in Ann Arbor to a meeting with the Michigan baseball staff. Michigan has told him he’d be able to play both sports for the school, and that’s got the Ohio State baseball verbal considering his future. The Ohio State baseball staff has been as supportive as possible in what is definitely a tough situation.

“The Ohio State staff has been awesome, in particular coach [Greg] Beals,” he said. “Coach Beals and I have had open communications throughout the entire process.”

What Velasquez doesn’t know right now is whether or not there’s a chance for him to play football at home in Columbus.

Whatever happens from here, Velasquez is going to get a chance to do what he loves to do.

“I don’t have a preference at all,” he said when asked where his heart sits on favorite sports. “I just love playing football. I want to play both. I have a love and passion for both sports.”