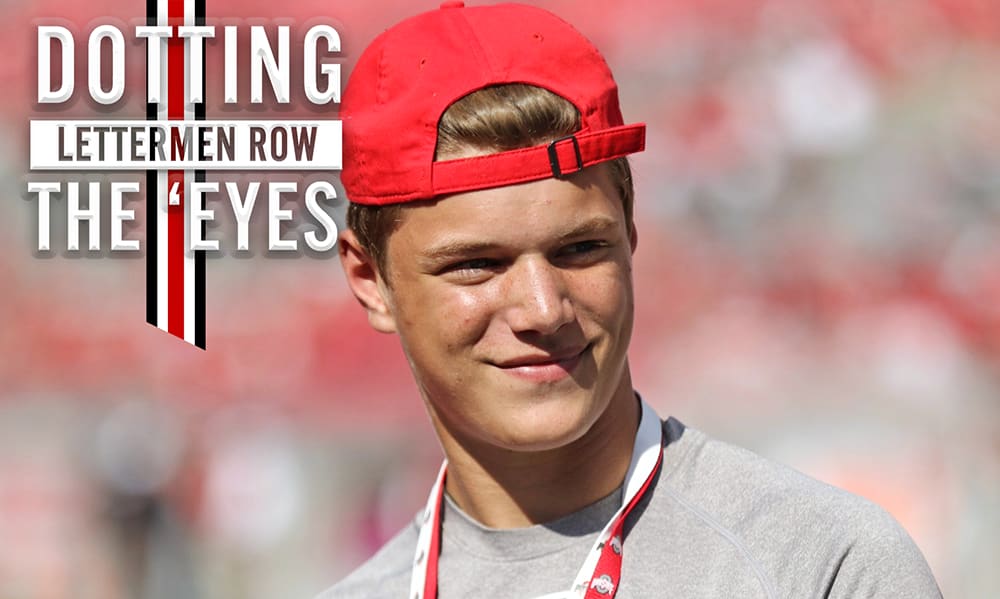 Ohio State could be in the driver's seat for Illinois 2021 quarterback J.J. McCarthy. (Birm/Lettermen Row)

Stay in touch or be left out because Ohio State recruiting is a 24-hour, seven-day-per-week obsession. What’s the latest news as the Buckeyes build for the future? Get that and more Sunday through Thursday on Lettermen Row. Today we focus on 2021 quarterbacks and a rising-star in Cincinnati that is set to visit the Buckeyes in late March.

Ohio State will host quarterback J.J. McCarthy in late March for what could be a pivotal visit for the 2021 quarterback from Nazareth Academy (La Grange Park, Ill.).

“I can’t wait to visit Columbus in a couple of weeks,” McCarthy told Lettermen Row. “We’ll be there on Friday night [March 22] and Saturday. My entire family is coming with me unless my sister has cheer.”

McCarthy isn’t currently ranked on the 247Sports.com composite rankings because most sophomores aren’t ranked yet. But he’s approaching 25 early offers including Michigan, Northwestern, Wisconsin, Penn State and Ohio State. He’s still waiting on a potential offer from Notre Dame, but as buzz about a possible Irish commitment from top-50 prospect Tyler Buchner gets louder, it’s worth wondering if the Buckeyes could find themselves very comfortably in the driver’s seat for the 6-foot-2, 180-pound McCarthy.

Ohio State is serious about McCarthy as the early offer indicates, but it does still seem to be trying to evaluate him and a handful of fellow 2021 quarterbacks to determine who is the best fit. Until then, it’s just getting to know the young quarterbacks.

Drake Maye hoping to get back to see Buckeyes

One of those other quarterbacks the Buckeyes are working on getting to know is Myers Park (Cornelius, N.C.) star Drake Maye, the younger brother of North Carolina basketball standout Luke Maye.

Maye’s father, Mark, also suited up in Tar Heels blue, playing football for North Carolina in the early 1980s after putting together one of the most-storied prep careers for any athlete in North Carolina history.

Now Ohio State is trying to lure the 6-foot-4, 200-pound Maye — who has one of the stronger arms in the Class of 2021 — to Columbus. It’s not going to be easy, but the Buckeyes are one of the few programs that can do it. Maye remains in regular communication with the Ohio State coaching staff.

“I talk to Corey Dennis and Ryan Day every other day or so,” he said. “Mike Yurcich often as well.”

The primary point of conversation right now is the plan to get Maye back in Columbus. Right now there’s no date for a visit, but it will be something he figures out soon.

“I plan to make it up this spring,” he said. “Still figuring out the date.”

Maye did visit the school during the season and left very impressed.

“It was an awesome visit to Ohio State,” Maye said in November. “I really liked the coaches and the atmosphere. I was really impressed with the offensive style of the Buckeyes. It’s a pro-style scheme that gets you ready for the next level. I also was impressed by the type of players they have, not only great players but great people too.”

The Buckeyes are very familiar with Cincinnati Moeller High School, and there’s a developing prospect in the hallways there in the 2020 recruiting class. His name is Carrington Valentine, and he’s a 3-star prospect now holding scholarship offers from Michigan State, Louisville, Boston College, Purdue and Kentucky among near a dozen total.

He’s been in contact with Ohio State on and off for months.

“I talk to [linebackers coach] Al Washington, [assistant secondary coach Matt] Thurn and Tim Hinton,” the 6-foot, 180-pound Valentine told Lettermen Row. “We’re concentrating on relationship building. I’ve been to their camp every year since I was a freshman and I was in communication with Coach [Kerry] Coombs and Coach [Taver] Johnson prior to their departure.”

Washington first caught wind of Ohio’s 24th-ranked prospect while he was the linebackers coach at Michigan, but the talented defensive back had not met him until recently.

“I met him at my school for the first time about two months ago,” he said of the first-year Buckeyes assistant. “We have been in constant communication ever since. From what I know of him he seems to be a really cool guy. I look forward to continuing to build a relationship with him.”

The next step in doing that will be getting to Ohio State for a spring practice. There’s a date set for that.

“I’m planning on March 25,” Carrington said. “I really want to focus on enjoying some face-to-face time with Coach Washington and the rest of the Ohio State staff. I also would like to see if there are any changes in the culture since the departure of Coach Meyer and I would like to get to meet Coach Day. I was not able to meet him when he made a visit to my school because I was in basketball practice.”

Landing an offer from Ohio State would quite a recruitment-changer for Valentine, though he’s trying not to romanticize it too much.

“I’m no different from any other high school athlete in America, I just happen to be a defensive back that lives in Ohio,” he said. “An offer from The Ohio State University would be a big deal for me. Ohio State has a great reputation for producing defensive backs that are NFL prospects.”

Ohio State: Trying to answer big questions with Buckeye State prospects
Ohio State recruiting: Which players could be next wave of Rushmen?
Advertisement