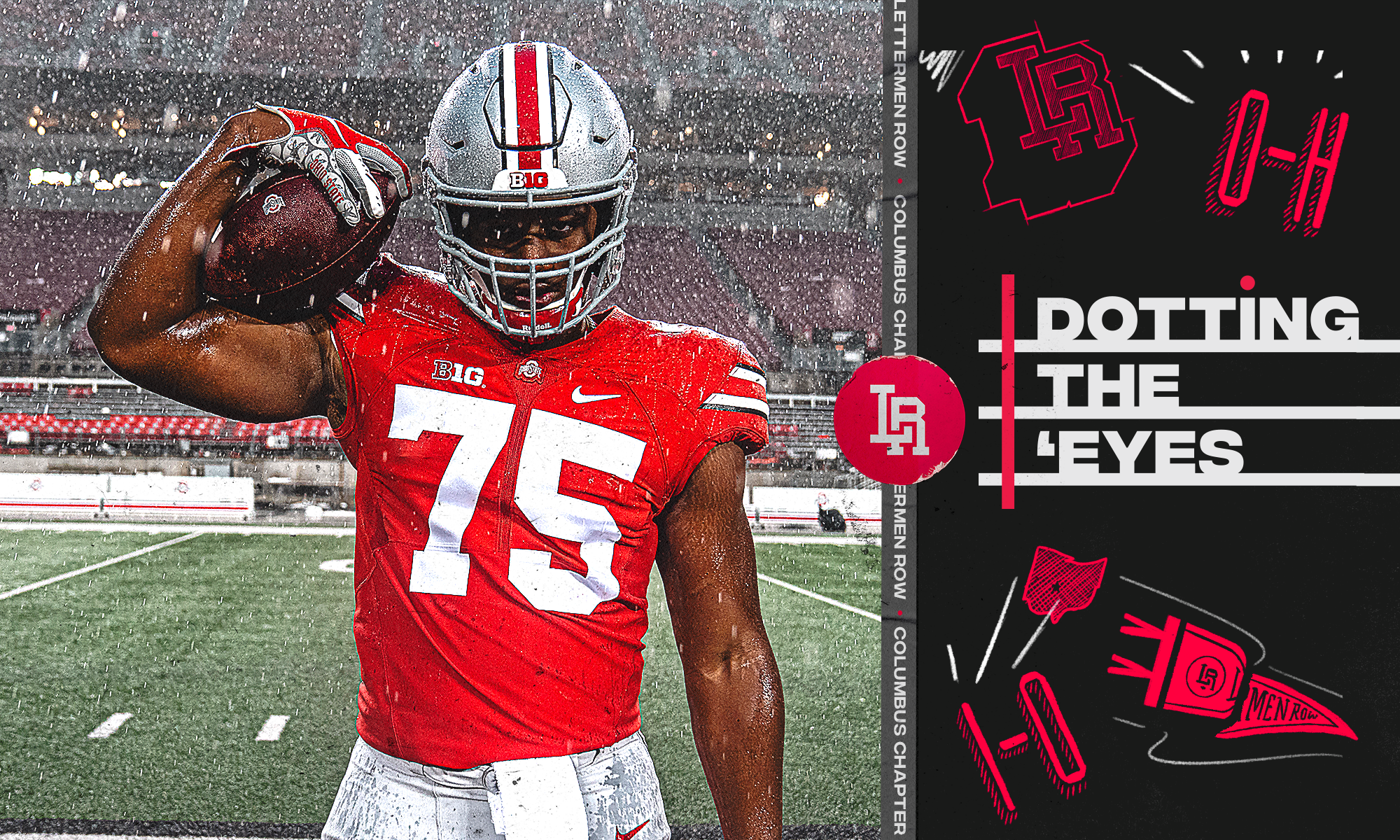 Stay in touch or be left out because Ohio State recruiting is a 24-hour, seven-day-per-week obsession. What’s the latest news as the Buckeyes build for the future? Get that and more Sunday through Thursday on Lettermen Row. Sunday’s edition of Dotting the ‘Eyes checks in on the latest in a series of key moments for the Buckeyes top-ranked Class of 2021.

One of the biggest remaining pieces of the 2021 recruiting puzzle for Ohio State is on the verge of making his commitment.

That is 5-star offensive tackle J.C. Latham who has, for more than a year, been considered by most recruiting analysts to be favoring Ohio State. Though there’s no planned decision date that has been made available, the tweet certainly indicates that something is happening sooner rather than later. The country’s No. 5-ranked tackle was included in Lettermen Row’s most recent class prediction but for the last month or so — specifically following the NFL Draft — there’s been a real concern that Alabama had moved ahead of Ohio State, according to sources close to the Buckeyes program.

But to be perfectly clear, that’s not based as much on what Latham has said but more on what he’s not said. Communication in recent months has been “spotty” according to one Buckeyes source. There’s been some changes in Latham’s family dynamics and that may have led to some changes in influence which has not been a good thing for Ohio State. Adding to the unease is the fact that in most cases where there’s recruiting optimism, there’s usually a much more positive vibe than among the players already committed to the Ohio State program.

There are — again according to one source — “no good vibes” coming from Latham at this point.

That’s what has caused Lettermen Row to be less confident than most Ohio State-related recruiting sites for the last month or so. In most cases, when a decision is coming up, communication between a player and the program he’s picking increases rather than decreases.

Could it all be an elaborate ruse by Latham to throw people off the scent? Yes, it could be, but there’s too much smoke right now to feel the same confidence in Ohio State being his choice that was felt four, five months ago. I’ve been wrong before and I could be wrong again, but if a decision is coming this week, my opinion is that it will be Alabama who gets the big recruiting win.

Troy Stellato’s decision and how it affects Ohio State

Ohio State has had very little to feel bad about on the recruiting trail this year but there’s no doubt that right now, the few dominoes that are falling are leaving Buckeyes fans feeling a little down.

But it’s all about perspective, right? On Friday, Troy Stellato committed to Clemson ahead of Ohio State and though it was expected, it still stings a bit for the Buckeyes coaching staff. They were, after all, among the earliest major programs to identify and recruit Stellato and the relationship he had with Brian Hartline and receivers assistant Keenan Bailey was sincere and strong. Still, Clemson gets the win after being able to get Stellato on campus twice in the last six months when the Buckeyes weren’t able to because of the recruiting dead period that wouldn’t end.

Why Clemson? According to those in the know, the young receiver — smartly — had concerns about the Buckeyes receiver room and the depth therein. Ohio State signed four top ten-ranked receivers in 2020 and have two players ranked inside the top 15 at the position in 2021 already committed.

Plus, there’s Emeka Egbuka. who continues to be closely linked to the Buckeyes and that point has been hammered home to Stellato by other coaches as another deterrent. Stellato apparently believes that the country’s No. 1-ranked receiver is going to pick Ohio State,

Way back in 2014, Penn State used this same tactic to recruit quarterback Brandon Wimbush, who was a priority for Ohio State at the position in the Class of 2015. Torrance Gibson was one of the country’s highest-profile recruits and though many thought he’d end up with the Buckeyes, Ohio State wanted two quarterbacks in the class because there were some key people working at the WHAC who thought he’d end up at receiver. Wimbush wasn’t convinced and decided to commit to the Nittany Lions before eventually flipping to Notre Dame.

Ohio State ended up with Joe Burrow at quarterback in that class, so things turned out OK for them anyway. Maybe things end up OK in the Class of 2021, too?

Ohio State not likely to be the choice for Jaylin Davies

While we’re in the midst of bad news and perspective, let’s round out this edition of Dotting the ‘Eyes by being clear: when the Buckeyes said yes to Saguaro (Scottsdale, Ariz.) High School 4-star cornerback prospect Denzel Burke two weeks ago it effectively removed the chance that Jaylin Davies would end up committing to Ohio State.

So, earlier this week, when Davies announced his own commitment date and included the Buckeyes in his final four schools and the 247Sports.com crystal ball predictions subsequently began to tilt toward Oregon, there’s a good reason why.

Ohio State, with six defensive backs committed, is focused on adding Derrick Davis at safety to round out the defensive backfield in the Class of 2021. Yes, if Jordan Hancock or Tony Grimes decides to give a real look to the Buckeyes, they’d likely work to accommodate them, but for now it’s probably Derrick Davis or bust in the secondary.