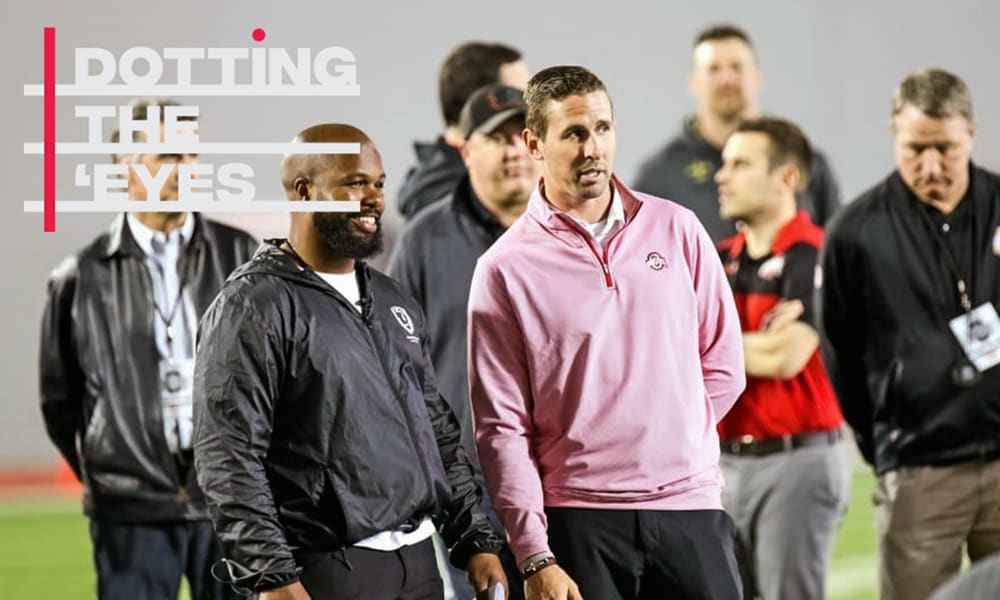 Brian Hartline earned his title as the national recruiter of the year by 247Sports.com. (Birm/Lettermen Row)

Stay in touch or be left out because Ohio State recruiting is a 24-hour, seven-day-per-week obsession. What’s the latest news as the Buckeyes build for the future? Get that and more Sunday through Thursday on Lettermen Row. On Thursday, we talk with an offensive lineman who has a date set for an Ohio State visit, look at Brian Hartline being named the Recruiter of the Year and more.

Brian Hartline named Recruiter of the Year by 247Sports

He may not like to be told that he’s a good recruiter, but by every objective measure, Ohio State receivers coach Brian Hartline is a very good recruiter. Now he has an award for it, as Hartline was named the 247Sports.com Recruiter of the Year on Wednesday.

Congratulations to @OhioStateFB’s Brian Hartline (@brianhartline), the 247Sports National Recruiter of the Year.

The dynamic young assistant has done a remarkable job in each recruiting cycle that he’s been a part of identifying his top targets early, then making sure those young men and their families know exactly where they stand with Ohio State and Hartline throughout their recruitment. With four of the country’s top-16 receivers committed and never even a hint of wavering from any of those standouts, Hartline earning the honor seemed to be a safe bet.

Please respect my decision, my recruitment has officially re-opened. pic.twitter.com/tYa3249xm8

One of the schools that the Clemmons (N.C.) West Forsyth has interest in visiting is Ohio State, and the 6-foot-4, 325-pound guard will be doing that in March.

“I’ll be visiting [Ohio State] on March 30,” Wilson told Lettermen Row. “Myself and my coach.”

The conversation leading up to a scheduled visit date has been consistent between Wilson and the Buckeyes coaching staff — including both Kevin Wilson, who recruits North Carolina, and offensive line coach Greg Studrawa.

“I talk to Coach Stud every day — I can tell that he takes his job very seriously and he does a very good job at it” Wilson said. “And I talk to Coach Wilson every other day. I just love the way that Coach Wilson runs the offense. If they offer, they’ll definitely be up near the top of my list.”

Now that Wilson, the country’s No. 16-ranked offensive guard, has reopened his recruitment, he knows he’ll have a number of options. Going away from home isn’t something he’s concerned about as he weighs his options.

“I don’t mind the idea of leaving the south,” Wilson said. “Especially for a place like Ohio State.”

On Thursday morning, Ohio State offered Florida wide receiver Mario Williams, the state of Florida’s No. 9-ranked junior and the No. 6-ranked receiver in the Class of 2021.

Tony Alford was the coach who extended the offer, not Brian Hartline. But as the Buckeyes continue to attract high-quality wide receiver interest around the country, Williams is worth paying attention to if he decides to make a trip to Columbus for a visit.

While it is Lettermen Row’s almost impossible quest to keep readers updated on every single offer that Ohio State extends, occasionally things slip through the cracks. That’s what happened last week when Texas 2022 receiver Armani Winfield added an offer from the Buckeyes.

Winfield is an early 4-star receiver in the Class of 2022 and the No. 10-ranked sophomore wideout in the country. He was offered by Ryan Day, and quarterbacks coach Corey Dennis was at Lewisville (Texas) High School last week. The Buckeyes have previously been called the dream team for the 6-foot-2, 180-pound receiver.

“Growing up, Ohio State was always my dream school,” he said. “It was because of Braxton Miller. Now that I’m a recruit, though, I think they run a great offense and put all their athletes in a good position to be successful on the field.”