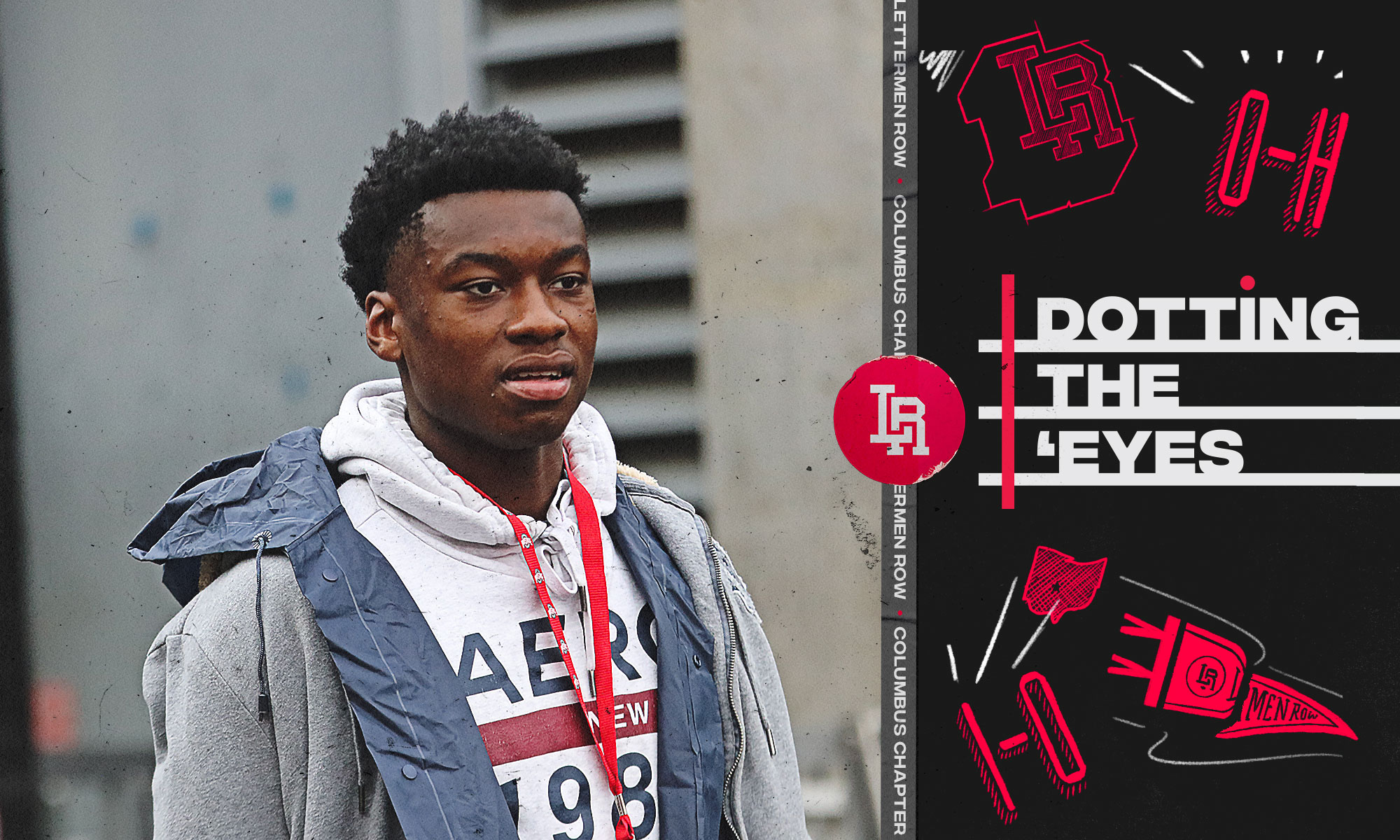 Jantzen Dunn made his first visit to Ohio State in November. (Birm/Lettermen Row)

Stay in touch or be left out because Ohio State recruiting is a 24-hour, seven-day-per-week obsession. What’s the latest news as the Buckeyes build for the future? Get that and more Sunday through Thursday on Lettermen Row. Today, we’re back to looking at defensive backs for 2021, the decommitment of the country’s top-ranked player and more.

Jantzen Dunn ends up where he wanted all along

The Buckeyes landed Kentucky’s top prospect on Monday when South Warren (Bowling Green) High School defensive back Jantzen Dunn committed to them over Oklahoma, Louisville, Miami and others.

As Lettermen Row wrote on Sunday afternoon, that commitment almost didn’t happen because Dunn, the nation’s No. 15-ranked athlete in the Class of 2021, actually gave a verbal commitment to Oklahoma and Lincoln Riley on Saturday night. Whether it was a tweet from Lincoln Riley or Dunn himself tweeting that he had “big news” coming shortly, the Buckeyes caught wind of Dunn’s plans and wasted no time reaching out to him and his family on Saturday night to figure out what was going on.

Ohio State did not believe that Dunn was going to be committing anywhere anytime soon. So until Saturday, there wasn’t any major concern about losing him. The Buckeyes had four defensive backs committed and were happy to allow remaining targets like Dunn, Jaylin Davies and others to take their time during this NCAA-mandated dead period and then continue evaluations whenever they were able.

According to Lettermen Row sources, the fact that Ohio State wasn’t pushing for a commitment may have led Dunn and his family to believe that maybe it wasn’t sold on him entirely. That was just not the case.

Ohio State cleared that up, and two days later, he committed to the school he wanted to all along. Now, he’s the fifth defensive back in the Class of 2021. He puts the Buckeyes into a unique position with a handful of cornerbacks and safety prospects who are still on the big board and looking to see where they fit into the plans.

One of those defensive backs wondering about Ohio State is Mater Dei (Santa Ana, Calif.) 4-star cornerback Jaylin Davies. We talked to him a week ago, and he raved about growing connection between his family and the Buckeyes. That relationship took another step in the right direction on Monday when the 6-foot-1, 175-pound defensive back made a virtual visit to Ohio State.

“My family was able to be there, my uncle, aunt and mom,” Davies told Lettermen Row. “It went pretty good. It was really just a chance for us to what they had to offer and to see the academic side.

“They liked it a lot, they got a lot of their questions answered.”

Ohio State is one of the top contenders for Davies, though he’s not yet actually been on campus in Columbus yet. The Buckeyes landed a commitment from TreVeyon Henderson in this cycle without a physical visit to the school, but Henderson lives in Virginia, not California. Davies suggested to Lettermen Row last week that his recruitment could have ended already if he’d been able to get to Ohio State in April as he and his family had planned.

“I’ve been talking to [Ohio State defensive coordinator] Kerry Coombs daily,” the country’s No. 11-ranked cornerback said. “We began to speak a lot before the virus stuff began. Coombs is funny and honest. If everything [at Ohio State] was what he and Coach Day said it was when I was supposed to visited, then I would have probably committed.”

At one point the Buckeyes were working pretty hard to get the country’s No. 1-ranked 2021 prospect, Korey Foreman, on campus for a visit. The Corona (Calif.) Centennial defensive end then committed to Clemson, a program that does not allow its commitments to make visits anywhere else. When that happened, it seemed the possibility of bringing in the 6-foot-4, 265-pound Foreman was finished.

That changed on Tuesday when Foreman became the first player since the end of 2016 to decommit from Clemson, a decision that was first reported by Grace Raynor of The Athletic. The crux of the issue for Foreman? The Tigers very strict no-visit policy.

Clemson is one of the country’s most successful recruiting programs, and so it’s difficult to question that recruiting approach. But when a program applies pressure for early commitments and also has a strict no-visit policy, this sort of situation seems inevitable. The fact that it hasn’t happened more often to Clemson is a testament to the strength of the program and leverage that being one of the country’s truly elite programs affords.

Ohio State is one of the many programs that will try again to get involved with Foreman, and there’s no doubt that Larry Johnson has already begun reaching out to him. USC, which has been on a hot streak on the recruiting trail recently, is one of the programs that has been very closely linked with Foreman in the last few days as these concerns have begun to percolate.

If the primary reason for Foreman’s decommitment was the desire to take other visits, there’s no reason to expect or believe that he’s flipping to any other school in the near future. His recruitment is more likely just now going to really take off, and the Buckeyes are hoping to get a real shot.

Speaking of hoping for a real shot, that’s all the Buckeyes have ever wanted with Pennsylvania offensive tackle Nolan Rucci. According to his recently released top-nine schools list announced on Monday on Twitter, they do still have one.

But it’s not a great shot.

Penn State, Wisconsin, Notre Dame and Clemson are reportedly near the top of the list for Rucci. His brother is a tight end at Wisconsin, and his family has strong ties to the Nittany Lions. His father, Todd, played at Penn State before spending eight seasons in the NFL. The country’s No. 3-ranked offensive tackle, who hails from Warwick (Lititz, Pa.) High School, has not been to Ohio State in the last year. There is no real or reasonable expectation that the Buckeyes are really in the mix for his eventual commitment at this time.

Sometimes, even a program like Ohio State is just a hat on the table.