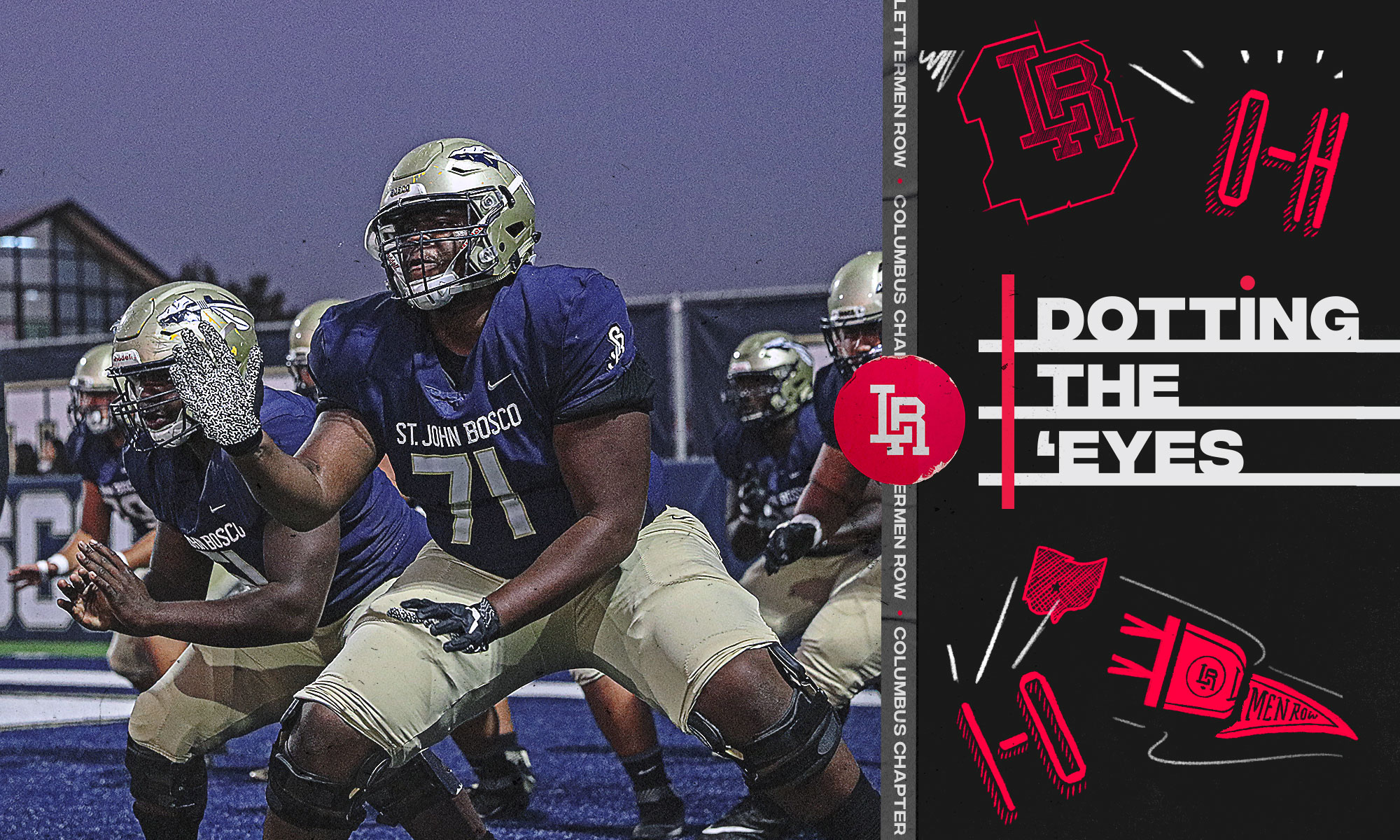 Earnest Greene has visited Ohio State and wants to return as soon as possible. (Birm/Lettermen Row)

Stay in touch or be left out because Ohio State recruiting is a 24-hour, seven-day-per-week obsession. What’s the latest news as the Buckeyes build for the future? Get that and more Sunday through Thursday on Lettermen Row. Ssunday’s notebook breaks down four recent offers from Ohio State in the Class of 2022.

It was about 8:30 on Saturday night when Oklahoma coach Lincoln Riley posted his signature commitment tweet.

That message usually signifies when the Sooners have a new prospect in the fold. One minute after Riley’s tweet, Ohio State offer and defensive back target Jantzen Dunn, hit send on a tweet of his own.

And so began a pretty wild Saturday night.

Sources in Oklahoma began leaking. Within minutes of those tweets there was seemingly solid information that Dunn, the country’s No. 15-ranked athlete, had made his decision and that the Sooners were likely to be the choice in the near future. Within an hour, those same sources were backtracking, suggesting that something had changed for Dunn, who was offered by Ohio State last month.

So what changed? That remains to be seen. But for the Buckeyes, the hope would have to be that the 6-foot-2, 180-pound defensive back has decided to hold off from committing to Oklahoma, a school he’s not visited, and give Ohio State a chance to evaluate him as they had hoped to do this spring. That’s something Mark Pantoni alluded to during a conference call two weeks ago.

“Some of these ’21 kids that we were hoping to make final decisions on, by either watching them practice live or by having them at the camp, that may be in jeopardy now,” Pantoni said. “The film is going to take a lot of weight now, and hopefully we’ll be getting these kids on campus again when it opens up to spend more time around them.”

There’s a chance that Ohio State has already done its required homework on Dunn and just hadn’t yet communicated that to him. If that’s the case and they’re willing to accept a commitment from him, it could be that Saturday was the first time that conversation happened between the Buckeyes and Kentucky’s No. 3-ranked player. It should be noted that sources in Columbus did suggest a month ago he was already considered a take then.

Recruiting changes minute by minute, and there’s no better example of how true that is than what happened Saturday with Jantzen Dunn. The next day or two will prove instrumental on where things go in his recruitment.

Ohio State going back to Cali

The Buckeyes have been busy the past few days extending scholarship offers to 2022 prospects from around the country. For Earnest Greene, who announced his offer on Friday night, it actually happened about a year ago. He just didn’t know it.

“I thought I had been waiting for this one, it’s a big one,” Greene joked with Lettermen Row. “That was until they told me they actually offered me last spring.”

Last spring is when the 6-foot-4, 300-pound sophomore visited Ohio State with St. John Bosco (Bellflower, Calif.) teammates, including Clemson commit Beaux Collins. He was impressed by what he saw in Columbus. That hasn’t changed, and he remains very interested in the Buckeyes.

“We’ve stayed in contact,” Greene said. “They have offensive lineman in the NFL all over the place, and have All-Americans on their offensive line right now.”

One of those All-Americans is Buckeyes guard Wyatt Davis, who came from St. John Bosco in the Class of 2017. He’s one of the players Greene looks up to, along with current Ohio State freshman Kourt Williams.

“Both of those guys went and are on the same path that I am on,” the country’s No. 19-ranked overall prospect in the 2022 class said. “I will most definitely use them as mentors.”

Like everyone else, Greene is waiting for life and recruiting to get back to normal before thinking too much about his future.

‘I’m just trying to wait and see everything out before I make any decision in my recruitment,” Greene said. “But one thing I would want to do right now is to visit Ohio State again as soon as I’m able.”

There are plans in place for the country’s No. 16-ranked 2022 cornerback to visit Ohio soon, but NCAA-mandated recruiting dead periods mean that Jyaire Brown can’t add in a trip to see the Buckeyes at the same time. The 6-foot, 170-pound sophomore from Warren Easton (New Orleans) High School is originally from Cincinnati and will head north to see family if he’s able.

His family is no doubt excited by Brown landing an offer from Ohio State on Friday afternoon.

“Man, this feeling is unexplainable,” Brown told Lettermen Row. “I am beyond blessed man. I had to just let [Buckeyes defensive coordinator Kerry] Coombs know that Ohio is home and that I’ve made it a priority to get back home.”

It’s been two years since Louisiana’s No. 6-ranked sophomore prospect has been in Ohio, but if things go as he hopes, he’ll be back there regularly from now on, no matter what happens in the recruiting process from here until his eventual signing day.

“I think it’s going to be a smooth process from here,” Brown said. “Because I know where I’ll be when all is said and done. There’s no stress.”

Munchie LeGaux, the offensive coordinator at Warren Easton, played for Kerry Coombs at Cincinnati. Brown certainly has access to some valuable insight into what his potential coach is all about.

It’s very early in the process for Brown, he’s yet to visit Ohio State and has just had his first real conversation with the Buckeyes. But he is absolutely a player to pay close attention to when it comes to the 2022 class for Ryan Day.

Ohio State added a big-time 2021 commitment from the Houston area last weekend as Tunmise Adeleye picked the Buckeyes over a handful of the country’s best programs. Maybe it’s the desire to take advantage of that momentum that’s behind the timing of the recent offer to Denver Harris. It’s an offer he’s excited about earning.

“This offer means a lot,” Harris told Lettermen Row. “I’m just honored and very blessed to be in this position.”

#AGTG YESSIRSKIII!!! Beyond blessed to EARN an offer from The Ohio State University @CoachMattBarnes #GoBucks pic.twitter.com/IL18hHArCQ

No matter the reasoning, if the Buckeyes want to land the 6-foot-1, 180-pound cornerback, they’ll have to beat a who’s who of college football to do so. Harris has more than 30 offers already and is one of the country’s elite sophomore talents regardless of position.

Harris is from Houston’s North Shore High School, the alma mater of the country’s most polarizing 2020 recruit, Zach Evans. The Buckeyes have not spent much time recruiting the Mustangs despite the fact that North Shore is one of the best, most talent-rich programs in Texas.

With Harris, who has drawn comparisons to Jeffrey Okudah, now having an offer, that’s likely to change.

Rounding out the weekend update is another Buckeyes offer in the Class of 2022, this time to Florida tight end Tony Livingston.

Livingston is the No. 5-ranked athlete and No. 54-ranked overall sophomore prospect in the Class of 2022, hailing from Seffner Christian Academy in Lake Wales. The offer from Ohio State is the 21st for the 6-foot-6, 225-pound tight end.