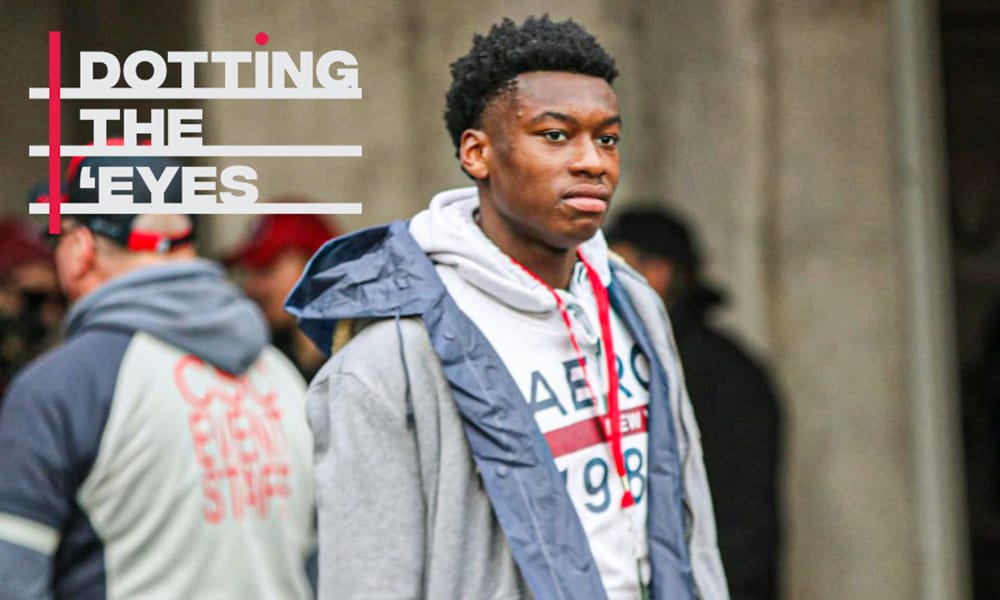 Kentucky athlete Jantzen Dunn has been in regular contact with Ohio State since September. (Birm/Lettermen Row)

Stay in touch or be left out because Ohio State recruiting is a 24-hour, seven-day-per-week obsession. What’s the latest news as the Buckeyes build for the future? Get that and more Sunday through Thursday on Lettermen Row. Tuesday’s notebook talks about a Kentucky athlete with Ohio State interest and a rising prospect inside of Ohio’s borders who recently added a major scholarship offer.

The Buckeyes are evaluating a number of big-time prospects from all over the country, but the program is also working hard to unearth players that have yet to be discovered by the national recruiting folks.

One player who fits the description of the latter is Bowling Green (Ky.) South Warren athlete Jantzen Dunn. A 6-foot-2, 170-pound defensive back prospect, Dunn has had consistent conversation with the Ohio State staff and was thrilled to visit Columbus for the first time for the Penn State game three weeks ago.

“Honestly, I was shocked that I caught the attention of such a huge program,” Dunn, ranked as the No. 6 overall player in Kentucky by 247Sports.com, told Lettermen Row. “And the visit was amazing. They have incredible traditions and atmosphere.”

During his trip, Dunn was able to get more familiar with Ohio State assistant Matt Barnes and defensive co-coordinator Jeff Hafley, though neither was able to give too much time because there was a game to win.

“Coach Barnes reached out to me and we just started talking about the Ohio State program,” Dunn said. “I had spoken with Coach Day over the phone a couple of times, and I spoke with Coach Hafley briefly before the game, though I could tell he was in game mode.”

Ohio State has not offered Dunn. Six schools have, though, including Baylor, Cincinnati and Purdue — and he’s working through his list of priorities while the Buckeyes work to know more about him. What they do know is that he’s not getting enough attention for his talents.

“I’m looking for a place I would like to live,” he said. “But also a program that is high on academics with a great network of people that have graduated from that school. They continue to talk to me and want to get to know me better. They want me to get more familiar with what they offer outside of football.

“From my conversations with Coach Barnes and Coach Day, they said I am flying under the radar and that I continue to climb on their recruiting board.”

BEYOND BLESSED to have received an offer from The University of Alabama #RollTide 🙏🏾 pic.twitter.com/rxGvzYhwdz

That offer from Alabama comes on the heels of a spectacular junior season for the 6-foot-3, 235-pound Peterson, who rewrote the Knights record books after recording a staggering 21 sacks this year. Now with seven offers from Alabama, Wisconsin, Iowa State, West Virginia, Maryland, Pitt and Akron, Peterson is hoping to hear something — anything — from the home-state Buckeyes.

“I’ve yet to hear from Ohio State,” Peterson, the No. 14-ranked junior in Ohio told Lettermen Row. “It would mean a lot to me because I’ve been watching them throughout my whole childhood. It would be an honor to know I have a chance to be there.

“Chase Young is one of the people I look up to, so that would make it that much greater. Being born and raised in Akron, my whole family is Buckeyes fans.”

As for Alabama, it believes Peterson could play outside linebacker, the position he prefers. He’s projected by most recruiting services as a defensive end because his age and size make it seem fairly certain he’ll outgrow the linebacker spot. Nick Saban’s program first spotted Peterson while visiting 2020 commitment Caden Clark.

“Alabama had seen me practice during the season and liked what I was doing,” he said. “[The coaching staff] watched my highlights and liked what they saw. They said they see me as a speedy Jack linebacker off the edge for them.”

Ohio State assistant coach Greg Mattison was in Wisconsin on Monday, stopping in to see Muskego 4-star 2021 defensive back Hunter Wohler — who appears to be down to just the Buckeyes and the Badgers in his recruitment. While in Wisconsin, though, Mattison also made it to Whitefish Bay in Milwaukee, the home of the country’s top-ranked 2022 offensive tackle Joe Brunner.

I’m honored to have received an offer from The Ohio State University, Thank you coach @CoachGMattison pic.twitter.com/aDDCAMzLjK

Brunner becomes the third offensive lineman in the sophomore class to earn an Ohio State offer. His early 247Sports.com crystal ball has two predictions — both in favor of Wisconsin. If the Buckeyes hope to lure him away from his home state, the early offer and the chance to form a solid relationship early in the process is important to their potential success.