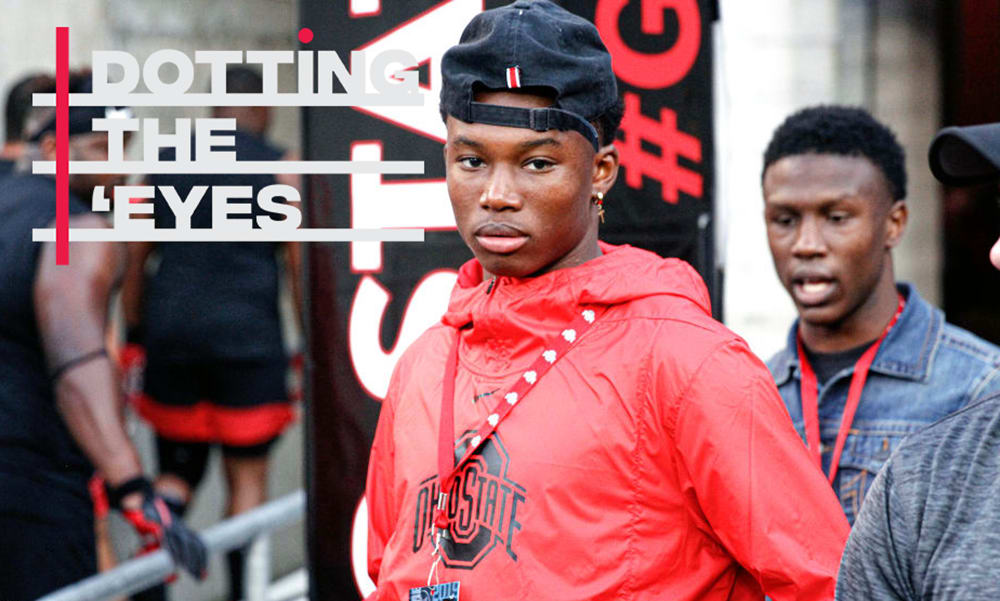 Stay in touch or be left out because Ohio State recruiting is a 24-hour, seven-day-per-week obsession. What’s the latest news as the Buckeyes build for the future? Get that and more Sunday through Thursday on Lettermen Row. Monday, we examine a handful of recent offers extended by Ohio State and wonder what it means that Kerry Coombs is in St. Louis just days after Brian Hartline and Matt Barnes were.

Lettermen Row caught up with DeSmet head coach Robert Steeples last week to talk about the return of Kerry Coombs, and he updated us on the Friday-night visit from the two Ohio State assistants.

“It’s always great having Brian Hartline stop by,” Steeples said. “And it was nice to meet Coach Barnes and talk some X’s and O’s with him in person.

That meeting with Coombs is happening on Monday night. The Buckeyes are not being shy in their deployment of the new Ohio State defensive coordinator, choosing to send Ryan Day’s most recent coaching hire on the road primarily by himself as he visits top targets around the country — and Jakailin Johnson is most certainly that.

Last week, Steeples told Lettermen Row that he did not believe any imminent decision was coming from the 6-foot, 170-pound Johnson. But the decision to send Coombs back to St. Louis just one business day after Hartline and Barnes visited suggests that Ohio State believes there’s a good opportunity to sway the country’s No. 5-ranked cornerback in its direction for good.

And maybe in the near future.

Ohio State offered its tenth 2021 running back on Sunday night — and the third from the state of Texas.

#AGTG WOW!!! I Am Extremely Blessed To Have EARNED An Scholarship Offer From!!!
“THE OHIO STATE UNIVERSITY”‼️⭕️@CoachTonyAlford @OhioStateFB #GoBucks ⭕️ pic.twitter.com/zE074qNvcB

Brandon Campbell is a 4-star prospect right now and the No. 14-ranked running back in the country. He’s from Lamar Consolidated High School, and the offer from the Buckeyes is No. 39 to his credit. That’s pretty good.

“[It’s there] when I go back in and watch the film,” Campbell told Lettermen Row. “I feel like we have similar builds. We run with a lot of speed but also have power at the same time.

“[Alford] said he sees a lot of J.K. Dobbins in me, and he said that’s the highest of compliment he can give me. That really meant a lot in my eyes. He offered because he liked my film, but more importantly we’ve had a connection that we’ve built. He said he wanted it to mean something when I got an offer from The Ohio State University.”

The conversation between Alford and Campbell has been going on for just about a month now as Ohio State keeps evaluating prospects around the country.

“We been in contact for a month or so,” Campbell said. “He followed me on Twitter one day and we exchanged info, and we just really started building a relationship from then on. It’s been on the phone, and he’s come by the school to watch me work out. It means a lot because before he offered he actually took the time to get to know me out of respect to me and my family.

“He wanted me to know that it is genuine and that he really wants me for real.”

Campbell has worked with the same folks that helped prepare Garrett Wilson for his time in Columbus, and he’ll visit the Buckeyes in the near future. In the meantime, just being offered by a program like Ohio State remains important just on the surface.

“You can’t argue with the results that they have had over the years,” Campbell said. “Ohio State’s tradition is second to none. It’s really just how they produce. They really have a system in place. They play the running back in space and give you a chance to be a creative runner or catch the ball out of the backfield and really be able to show the versatility you have.”

Buckeyes making play for recruits around the country

Ohio State offered a handful of additional recruits around the country in the last week, and while I don’t want to list every one of them, there are a couple worth mentioning.

The first is Kam Dewberry, who called Ohio State his “dream school” as a child.

The 6-foot-4, 300-pound Dewberry is from Humble, Texas. He is ranked as the No. 3 offensive tackle in the Class of 2022, though his frame means he’ll likely end up as a guard prospect down the line. The Buckeyes last signed a player from Humble way back in 1996 with wide receiver David Boston, and this was offer No. 20 for the sophomore offensive lineman.

Ritzie has 25 offers and is the nation’s No. 10-ranked defensive end. The Buckeyes are going to be searching from coast-to-coast in order to find complementary players to line up opposite of Jack Sawyer, and North Carolina remains one of the country’s most talent-rich states for defensive line prospects.

USC would have loved to move on from Helton but they couldn’t afford his buyout after having to pay over $400 million out due to lawsuits against the university.

Clemson will remain elite in recruiting because the NCAA refuses to investigate them even with testimony in court that they are one of quite a few schools who are paying recruits and/or their families. Perhaps the new image/likeness rule the NCAA is looking to pass will help other schools who play by the rules to close the gap on Clemson, Georgia, Alabama, and others.