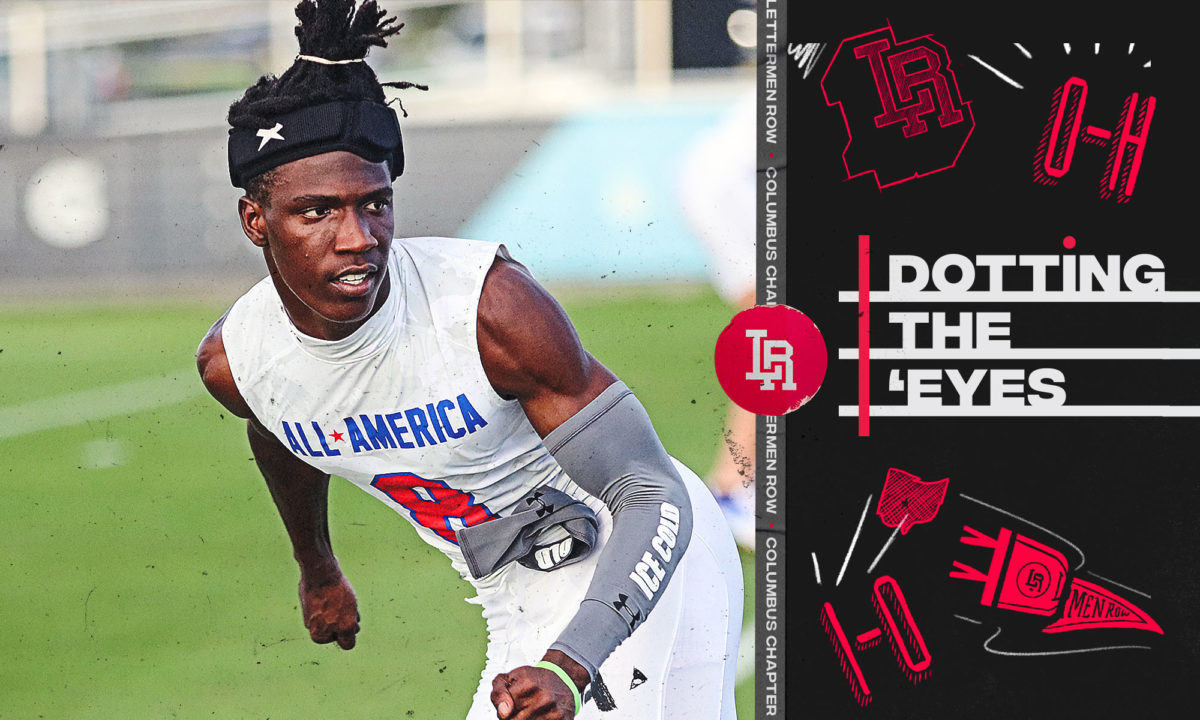 Stay in touch or be left out because Ohio State recruiting is a 24-hour, seven-day-per-week obsession. What’s the latest news as the Buckeyes build for the future? Get that and more Sunday through Thursday on Lettermen Row. Friday’s notebook looks at a couple of the weekend’s biggest recruiting storylines as official visits are ongoing across the country.

Last weekend, Jaheim Singletary told the media at Under-Armour’s Future 50 Camp that he was going to make visits to other schools. In fact, he’s already seen Miami a couple of times. He’s expected to visit Georgia officially this weekend before heading to Ohio State for the first time next week.

There’s a good chance these won’t be the final visits that the 5-star cornerback and Buckeyes commit will take. Recruiting players from Florida often brings twists and turns, no matter how many reasons they have to be connected to Ohio State.

There’s been no shortage of love shown to Singletary from Kerry Coombs and the Buckeyes. This isn’t a case where anyone is doing anything wrong, it’s just the nature of recruiting in the 2022 cycle. It’s also the nature of recruiting Florida. But it doesn’t always mean a flip is imminent or even likely. Shaun Wade was committed to Kerry Coombs for more than two years, took multiple visits to other schools like Florida and Alabama and never flipped. It can happen.

Kids like Jaheim Singletary have a ton of options in front of them, and he wants to make sure he’s 100-percent sure of his choice. There’s nothing wrong with that. He told Lettermen Row that Buckeyes fans don’t need to worry too much right now.

“There’s nothing to be afraid of for Ohio State fans,” Singletary said. “Coach Coombs already knows the situation. I just didn’t want to make a big deal about things. We’re still out here and it’s O-H.”

Next weekend for Singletary, he’ll be in the O-H. This weekend, it’s Georgia. Start the countdown to the December signing period.

Yes, J.T. Tuimoloau is on campus at Ohio State this weekend. But he’s far from the only key official visitors in Columbus.

For Buckeyes running backs coach Tony Alford, months of focus on Memphis (Tenn.) Christian Brothers running back Dallan Hayden comes to a head. The 4-star prospect made an official visit to Notre Dame last weekend, and the Irish have made this much closer than anyone thought they’d be able to prior to that trip.

Now it’s Ohio State’s turn. Hayden has unequivocally been the top target for Ohio State in the last six months. The Buckeyes did host running back Gavin Sawchuk last weekend. But that was without any real worry of him making a decision, and that’s why he was able to visit before Hayden. Every other running back has been scheduled after Hayden for a reason.

The reason? The Buckeyes want Hayden in a big, big way — and he’s likely to make a college decision within days of the weekend’s visit concluding. Omarion Hampton, a very talented North Carolina running back, is scheduled to be at Ohio State next weekend. If Hayden is ready to pick Alford’s room over Lance Taylor’s at Notre Dame, it’d make some sense for Ohio State to hold off any tailback visits until the fall.

Another major 2022 target making his official visit to Ohio State is Kojo Antwi. The 4-star receiver from Lambert (Suwanee, Ga.) High School, Antwi has been one of the primary targets at receiver since being offered at the end of last year by the Buckeyes.

It’s been a difficult recruitment to follow at times. Texas A&M has been a consistent threat to land the 6-foot-1, 185-pound wideout, but Lettermen Row sources believe Ohio State is battling Alabama and Georgia more than the Aggies right now. The country’s No. 16-ranked receiver prospect will arrive in Columbus on Friday afternoon with his father, his brother and a cousin that lives nearby in Cincinnati.

Every receiver prospect in America knows what Brian Hartline is doing and the quality of the receivers being brought into the Buckeyes program. This weekend could be more about Ohio State trying to showcase the quality of people in the receivers room rather more than anything else. Putting Antwi with young people like Emeka Egbuka, Marvin Harrison and Jaxon Smith-Njigba is a huge selling point.

Ohio State has a short list of receivers it is still evaluating in the Class of 2022. But it is likely that any further offers hinge on how things go with Kojo Antwi this weekend. It’s an important visit for him and the Buckeyes.

Just named the defensive line MVP at the Rivals 5-star Challenge on Thursday, it’s hard not to see Miller’s Ohio State recruitment at a crossroads despite his intentions to visit in the fall instead. The Buckeyes have turned up the heat on California’s Hero Kanu in the last week and have been dialed in on Caden Curry and Chris McClellan over the last few months. McClellan is visiting next weekend, and the timing of this schedule change for Miller doesn’t seem coincidental. The Peach State star just wrapped up his official visit to USC and his good friend Mykel Williams committed there as soon as the pair returned to Georgia.

There’s good reason to think Christen Miller is going to follow suit before he returns to Ohio State, if he’s planning to do that in the fall.

June was destined to be a wild recruiting month, and it’s reshaping the big board for the Buckeyes almost daily.