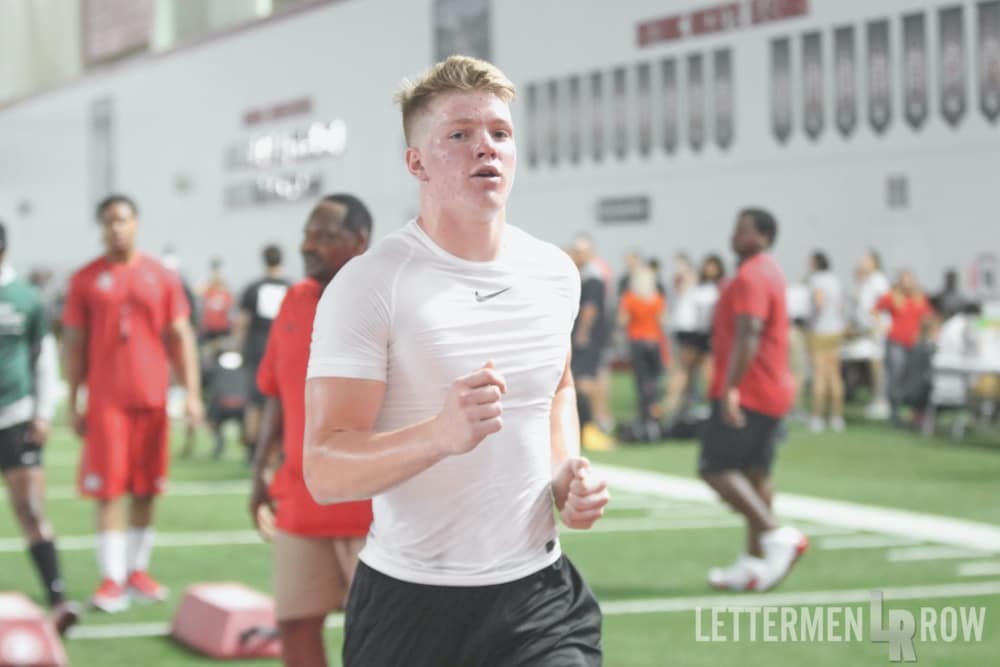 Stay in touch or be left out because Ohio State recruiting is a 24-hour, seven-day-per-week obsession. What’s the latest news as the Buckeyes build for the future? Get that and more Sunday through Thursday on Lettermen Row, including tonight’s updates on Ohio’s top prospect Jack Sawyer and Texas safety RJ Mickens.

There may not be a better college football prospect in Ohio than 2021 defensive end Jack Sawyer.

The 6-foot-5, 220-pound Sawyer has led Pickerington North High School to a 4-0 start, which has them ranked as the seventh-best team in the Midwest according to USA Today High School Sports. Sawyer spent the opening weekend of the season at Notre Dame watching the Irish take on Michigan. And this weekend he’ll make the short trip to Ohio Stadium to check out the Buckeyes in Urban Meyer’s return to the sidelines.

“There will be a lot of people there,” Sawyer told Lettermen Row. “I’m sure the crowd will be electric for his return.”

For a player like Sawyer, one of just two in-state prospects with an Ohio State offer in the Class of 2021, this trip will be more about fit and personality than being awed by the sights and sounds and cheers, even if those things are still pretty cool to see.

“When I go to games like this I really watch the defensive line the whole time,” Sawyer said. “But, seeing how big and loud the crowd gets in the stadium is pretty sweet, too.”

On the flip side of the coin, a game-day visit is a rare opportunity for Ohio State to actually talk to Sawyer, who is still restricted in his communication with the staff for almost another full year.

“The most important thing though will probably be just getting another opportunity to spend time with the coaching staff and see everyone,” he said.

There’s no doubt Ohio State feels that way, too. They’d love to get the country’s No. 3-ranked prospect committed early.

Jeffrey Okudah is a former Texas prep standout that was once ranked as the country’s No. 1 overall safety prospect in the Class of 2017. He took his talents to Columbus, and now the Buckeyes are hoping to repeat history in the Class of 2020 with Southlake (Texas) Carroll 4-star RJ Mickens.

Mickens, the No. 34 overall prospect in 2020 and the top-ranked safety, visited Ohio State in June for Friday Night Lights and told Lettermen Row at the time that the Buckeyes had vaulted toward the very top of his list.

“I plan on coming back to Columbus for a game this fall,” he said. “They’re really high on my list, there’s a lot of schools up there with them, but they’re at the top top.”

The 6-foot-1, 188-pound Mickens has not yet set a date for a return to Columbus as he intends to, but he did get a chance watch the Buckeyes play this past Saturday night in Texas against TCU.

“I can see myself fitting in their defense.”

Mickens has had conversations of late with Ohio State assistants Kevin Wilson and Alex Grinch, who handle Texas and safeties respectively.

“I’ve talked a lot with Wilson and Grinch,” he said. “We’re just getting a closer relationship, calling and checking in often.”

The son of former NFL defensive back Ray Mickens hopes to visit in November when the Buckeyes host Michigan, but that has not yet been finalized.

While Ohio State is anxiously waiting word on the college decision of St. Louis standout Jameson Williams, the coaching staff is still kicking the tires on a handful of other wideouts, including Indianapolis native David Bell.

Bell, the country’s 22nd-ranked wide receiver, has had a remarkable season to this point for Warren Central High School, already catching eight touchdown passes in four games. Over the summer, he released a top-5 schools list that included Ohio State, Penn State, Iowa, Purdue and Indiana and then made a summer visit to Columbus to see the Buckeyes.

Since then, though, a lot has changed for the Buckeyes — including the man that would be his position coach. Brian Hartline has worked to maintain contact with Bell and the two talked earlier this week according to the 6-foot-2, 185-pound two-sport star.

“We were just talking about a date for my official visit, we talk often” Bell told Lettermen Row. “We have not come up with the right date yet.”

That’s interesting news for Ohio State, who many people believe is not really a contender to land Bell. Penn State, where he’ll take an official visit to on Sept. 29 when the Nittany Lions host the Buckeyes, has emerged as a potential favorite, along with Purdue, where he’ll make an official visit on Nov. 3. That leaves plenty of other days for officials to his other favorites, and he hopes to see Ohio State when they host Michigan in late November, if he can.

Either way, the Buckeyes aren’t out of this race yet, even if they’re trailing.

While we’re talking about wide receivers and Jameson Williams, the Buckeyes may have received a little bit of good news in his recruitment on Tuesday night.

He will not take an official visit to Oregon this coming weekend as he planned.

I won’t be taking my Oregon official this weekend anymore..

The Cardinal Ritter Prep star still has an official visit planned for Alabama on Oct. 13 and Nebraska on Sept. 29, and he also took one last weekend to UCLA, though there seems to be little cause for concern about the Bruins role in his recruitment. He visited Ohio State officially in June.

The Buckeyes are hoping to gain a commitment from him before he makes any other official visits. Stay tuned.

Senior Tackle: Cade Stover gets first win as senior, hauls some manure
Are recruits being ‘shy’ about Ohio State after Urban Meyer suspension?