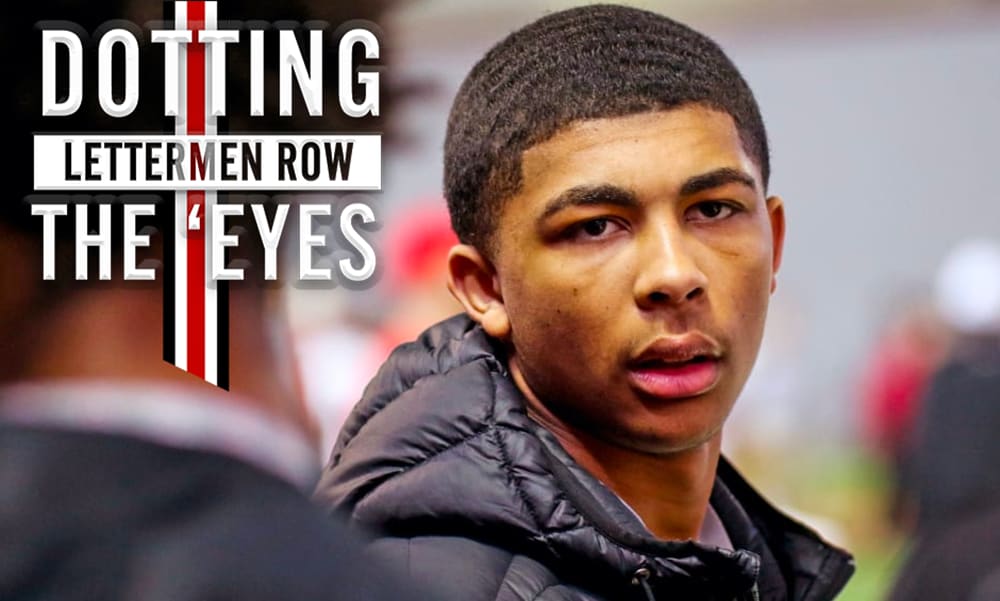 Ohio State is very high on Lorenzo Styles Jr. but his recruitment has some unique angles to cover. (Birm/Lettermen Row)

Stay in touch or be left out because Ohio State recruiting is a 24-hour, seven-day-per-week obsession. What’s the latest news as the Buckeyes build for the future? Get that and more Sunday through Thursday on Lettermen Row. The midweek notebook focuses on a pair of in-state recruits and a top lineman from Utah who says he wants to visit Ohio State this season.

The challenge of recruiting a player, not a position

Over the course of the last few days, a pair of recruiting analysts that I respect have each written about Pickerington Central standout Lorenzo Styles and their gut feel on his recruitment.

Second, while there’s zero doubt that Styles is a player Ohio State wants in its 2021 class, there are some questions regarding his ultimate position. He’s a player who believes whole-heartedly that he’s a wide receiver at the next level. There are some analysts out there — I count myself among them — who believe he has a very bright future on offense. But Styles could be a better defensive prospect — in the Gareon Conley mold — if he’d allow himself to consider it.

To this point, he’s not considering it. To be clear, the Buckeyes are not recruiting Styles as a defensive player. But in reality, they’re just recruiting him as a player, period. They want him in the Ohio State program no matter what position he plays, and that’s been proven repeatedly by their whole-staff recruitment of him and his family.

That said, there’s going to come a time when the Buckeyes will have that perceived uncertainty about a potential position used against them, and they’ll need to have a plan in place to respond.

While the case of Lorenzo Styles seems confusing in some ways, the recruitment of 2020 Dublin Coffman running back/wide receiver Mike Drennen appears confusing in others.

Simply put, it’s hard to see how and where Drennen fits into the 2020 class for Ohio State because there’s no clear-cut answer on what position he’s best suited for as he develops. Right now, there’s no room at wide receiver for the Buckeyes with five potential wideouts already committed in 2020. Whether or not the Buckeyes believe the 5-foot-11, 196-pound athlete can be a full-time running back seems very much in the air.

What’s not up for debate is that the Buckeyes are interested in continuing to get as familiar with Drennen on the field as they are with him off of it. In May, Drennen told Lettermen Row he was talking to Ryan Day very regularly and that the Buckeyes were at the top of his list.

“I talk to Coach Day almost every day,” Drennen said following The Opening regional camp in Massillon. “Ohio State is the one to beat, and I think they’re going to carry on the traditions from [Urban] Meyer. Coach Day is really chill, but I sense a different level of intensity there. I would say Kentucky is definitely pushing, though, and so is Florida and Penn State. I’ve also been hearing more from Alabama and Georgia.”

But things did change after that. Ohio State thought they had a pair of running back talents committed and guys like Drennen seemed on the outside looking in. Now he’s back on the radar and the question is will he remain patient and give the Buckeyes the time they need to re-evaluate where they stand.

Maybe Drennen isn’t willing to do that, though, because a recent rash of 247Sports.com crystal ball predictions have rolled in for Kentucky. As long as he’s not being made the guy by Ohio State, it’s easy to see him making the move to Lexington with the rest of the in-state talents the Buckeyes have passed up in this recruiting cycle. A decision will need to be made soon on whether or not the Buckeyes are willing to let that happen.

In May, Ohio State offered Orem (Utah) 2021 offensive lineman Kingsley Suamataia a scholarship. He told Lettermen Row at that time the Buckeyes were one program he had really hoped to get a chance to see in person, partly because his cousin, Ohio State freshman Enokk Vimahi, had said so many positive things about the school, the football team and the city of Columbus.

“My dad was a big Rams fan,” Suamataia told Lettermen Row. “Since I was young, we always would watch Orlando Pace stuff on YouTube. That’s why I wear No. 76. He’s the originator of the pancake block.”

Pace’s influence notwithstanding, Utah’s top-ranked 2021 prospect believes there’s a lot to like about the Buckeyes, and that’s why it’s so important for him to make a visit to Ohio. He had planned to visit this past summer with another of his cousins, 5-star 2020 linebacker Noah Sewell, but that visit fell through and the Hawai’i native didn’t make it east.

“Ohio State is just one of the schools that I want to visit,” he said. “They have a great offensive line tradition and I really like Coach Washington and what I’ve seen from [offensive line coach] Greg Studrawa so far. I’ve always wanted to make my own way, where I can be the best and learn from the best.”

Getting to campuses around the country is at the top of the list of priorities for America’s 12th-ranked offensive tackle. Beyond that, he’s trying to take his recruitment slowly.

“I really have no idea [on a timeline],” he said with a laugh. “It’s so far away. I’m just trying to take it all in. My dream is to play in the NFL, as it’s the dream of many kids. I want to find a place that can give me the best chance to chase that dream.

“I feel it’s going to come down to my position coach, the team, and my career choices as far as what degree I want to finish when it comes to picking a school eventually.”