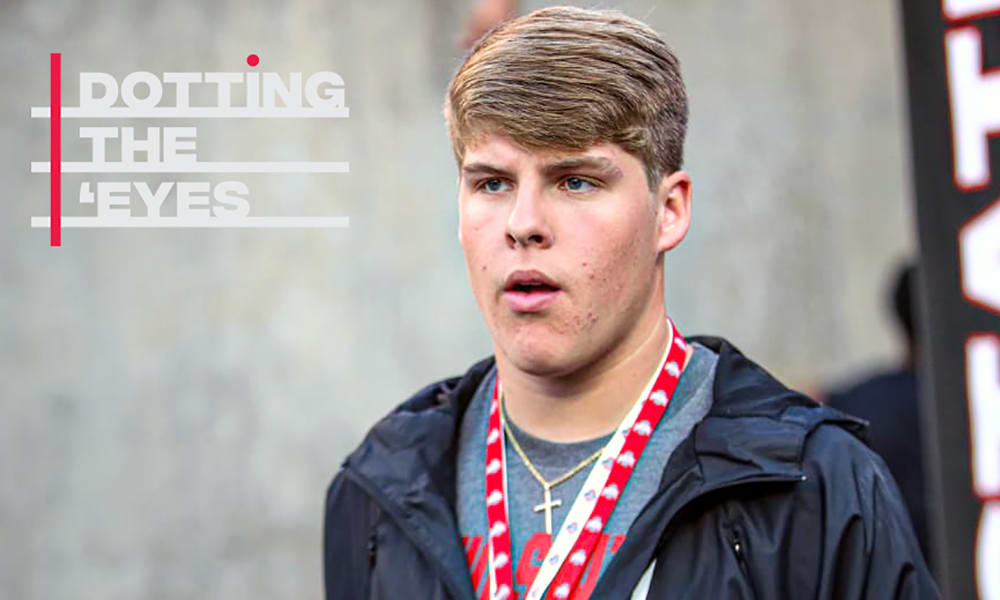 Hudson Wolfe remains a top target for Ohio State in the Class of 2021. (Birm/Lettermen Row)

Stay in touch or be left out because Ohio State recruiting is a 24-hour, seven-day-per-week obsession. What’s the latest news as the Buckeyes build for the future? Get that and more Sunday through Thursday on Lettermen Row. Tuesday, the discussion centers around Tennessee tight end Hudson Wolfe and introduces two new names to know in the Class of 2021.

Sam Hart committed to Ohio State in late December and did so knowing full well that the Buckeyes intended to continue recruiting another tight end in their 2021 class. Savannah (Tenn.) 4-star Hudson Wolfe has been up near the top of the list for Ohio State for more than six months and the 6-foot-6, 245-pound prospect has been staying involved with the Buckeyes during this NCAA-imposed dead period.

“I’m disappointed I can’t get to campus anytime soon,” Wolfe, who was scheduled to visit Ohio State on March 25, told Lettermen Row. “But we continue to have great conversation on the phone. I was on FaceTime with [Buckeyes tight ends] Coach [Kevin] Wilson today.”

The country’s No. 9-ranked tight end, Wolfe says the current recruiting situation has forced him to consider narrowing down his list of schools because the uncertainty around visits means previous trips need to be weighed again.

“It sure does,” Wolfe said when asked if this current situation dictates an adjustment to his approach. “That’s what my family and I have to figure out now.”

Wolfe is one of a handful of top tight end prospects still being pursued by the Buckeyes.

The efforts continue to add Troy Stellato and Emeka Egbuka to the Class of 2021, but on Tuesday morning the Buckeyes offered a new junior receiver, Christian Leary from Edgewater (Orlando) High School.

Leary, a 4-star prospect who checks in as Florida’s No. 45 recruit — which is kind of crazy, actually  — is a 5-foot-9, 180-pound inside receiver who has offers from Alabama, Georgia, Oklahoma, Florida, and pretty much every other Power 5 program in the country, though Clemson has not offered yet.

Ohio State has been recruiting Stellato and Egbuka hard for months and has two currently committed receivers, buy Leary’s flexibility, he can play all over the field and return kicks and punts, and explosiveness makes him an intriguing player to watch moving forward.

Of course, he’ll need to get himself to Columbus at some point if this recruitment has any chance to take off.

Also, to be clear, the offer to Leary is in no way related to how Ohio State is positioned with Egbuka and Stellato.

Ohio State has begun reaching out to new linebackers around the nation as it looks to complement commitment Reid Carrico, including a serious uptick in discussion with Florida 5-star prospect Terrence Lewis, as we mentioned here last week.

The Buckeyes aren’t just reaching out to the highest-ranked players, though. They’re continuing to mine for under-the-radar players and in that vein, a call went out to College Park (The Woodlands, Texas) 3-star linebacker Dylan Hazen. A 6-foot-tall, 220-pound prospect, Hazen has offers from Rice and Tulsa but is a player whose highlight tape shows great instincts and closing speed.

He said he loves my film and thinks I would be a perfect fit for Ohio State and said the next step is to build a relationship and learn about Ohio State.”

Learning about Ohio State isn’t likely to be a challenge for Hazen, who has family in the state. He also has family ties to Clemson, where he camped last summer.

“All of my dad’s cousins live up in Ohio,” he said. “All my cousins live in South Carolina. My parents actually met at Clemson.

“I know that pretty much everything about the Ohio State football program does is centered around [Michigan] and that Ohio State produces some of the best football players and linebackers such as A.J. Hawk, Chris Spielman, and Andy Katzenmoyer.”

Hazen runs an electronically-timed 4.56 in the 40-yard dash.

As mentioned on Monday, there is likely to a surge in top-ranked prospects releasing their top schools lists as players try to tighten up the recruiting process ahead of a shortened visit period in the coming months. Two players that have been talking to Ohio State and interested in the Buckeyes for months both did that on Monday afternoon.

Hunter Washington, who was supposed to be in New York this coming weekend, narrowed his top schools to six while California’s Jaylin Davies cut his options down to seven. Both defensive backs have remained interested in the Buckeyes as Ohio State fills up its recruiting class. Washington has visited Columbus once, Davies has not.

On the other side of the coin, the Buckeyes did not make the final cut for Texas running back Brandon Campbell, who has moved on to other schools.