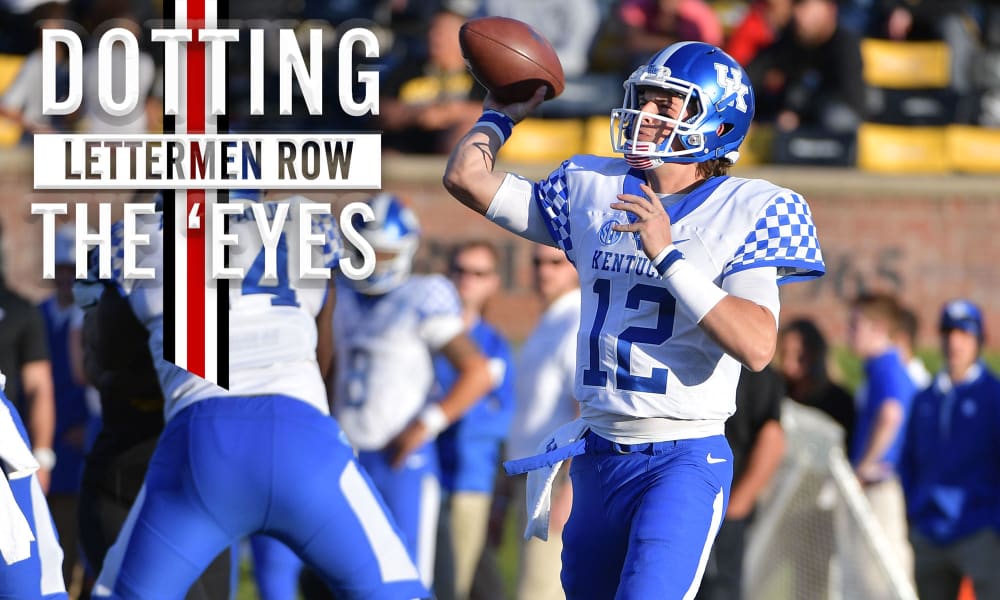 Stay in touch or be left out because Ohio State recruiting is a 24-hour, seven-day-per-week obsession. What’s the latest news as the Buckeyes build for the future? Get that and more Sunday through Thursday on Lettermen Row. Today we look at another potential graduate-transfer options, the Buckeyes hosting a top target this coming weekend and more.

When Lettermen Row confirmed Matthew Baldwin was planning a transfer out of Ohio State last week, the question immediately became: How do the Buckeyes replace him?

We tried to look at a couple of quick possibilities to fill the void but left off one name that would’ve been on the list if the player had announced his transfer intentions earlier. That player is Gunnar Hoak, a Dublin Coffman alum who played the last three years at Kentucky and was set to be the backup this season. On Tuesday, Hoak announced what many had expected to happen: He’s considering leaving Lexington for a shot to play elsewhere.

Of all the potential quarterbacks the Buckeyes are likely to consider, few make more sense than Hoak. Aside from growing up just 15 minutes away from campus in Columbus, Hoak’s father, Frank, played for Ohio State under Earle Bruce and was Chris Spielman’s roommate. His uncle, Fred Pagac Sr., coached for the Buckeyes. And his cousin, Fred Pagac Jr., suited up for John Cooper.

On the field, Hoak fits the Ohio State offensive system and is a natural passer with an NFL frame at 6-foot-4, 200-pounds. A former 3-star prospect in the Class of 2015, Hoak graduates from Kentucky next week and would have two years left to learn and play at his next school, making him an ideal match for the Buckeyes as they try to bridge the gap between Justin Fields and Jack Miller.

So there’s just one question: Will Hoak consider a school where he’s all but assured to be a backup? Barring injury, leaving Kentucky for Ohio State isn’t going to get him a bump in playing time.

But it would bring him back home to the school he dreamed of playing for when he grew up in Ohio. Is that enough for him? We’ll see.

It was mentioned in Tuesday’s Recruiting Question of the Day column, but yes, Ohio State is hosting 5-star linebacker Mekhail Sherman for an official visit this weekend.

Sherman took an official visit to Georgia last weekend and was part of the big “G-Day” event. Now with a visit coming to Ohio State, one has to wonder if there’s been an adjustment to his plans of a December announcement and if his original timeline of a summer commitment is coming back into play.

There will be major differences in Ohio State for Sherman on this visit compared to his most recent one in November. And there will be major differences between this weekend’s visit and his trip to Georgia last week. Georgia used its spring game and recruiting circus to show off the energy and excitement around its program, while the Buckeyes will hope to reconnect with Sherman and his family on a personal level.

Ryan Day, Al Washington, Greg Mattison, Larry Johnson and the rest of the coaching staff will spend time with Sherman, giving him the ins and outs of the Ohio State program.

This is just about the Buckeyes and Sherman. No pomp. No circumstance.

Another of Ohio State’s linebacker targets has set his official visit with the program as well. California’s Kourt Williams told Lettermen Row he’ll be heading back to Columbus this June.

“I have an official visit scheduled for the weekend of June 22,” the 6-foot-1, 216-pound Williams said. “I am speaking to Ohio State on a weekly basis, mostly [co-defensive coordinator] Jeff Hafley.”

Williams was offered by the Buckeyes during a late March visit to the school with a handful of his St. John’s Bosco (Bellflower, Calif.) teammates. He said the Ohio State staff did a great job showing him what the program is about.

“It was everything I thought it would be and then some,” Williams said. “Just showing me how I fit in their program and seeing the whole campus. It felt like a good fit for me.”

Williams has a few other official visits planned and a timeline in place for a decision.

“I’m going to visit Texas A&M, Oklahoma, and Tennessee,” Williams said. “I should be making my decision around September, if not earlier.”