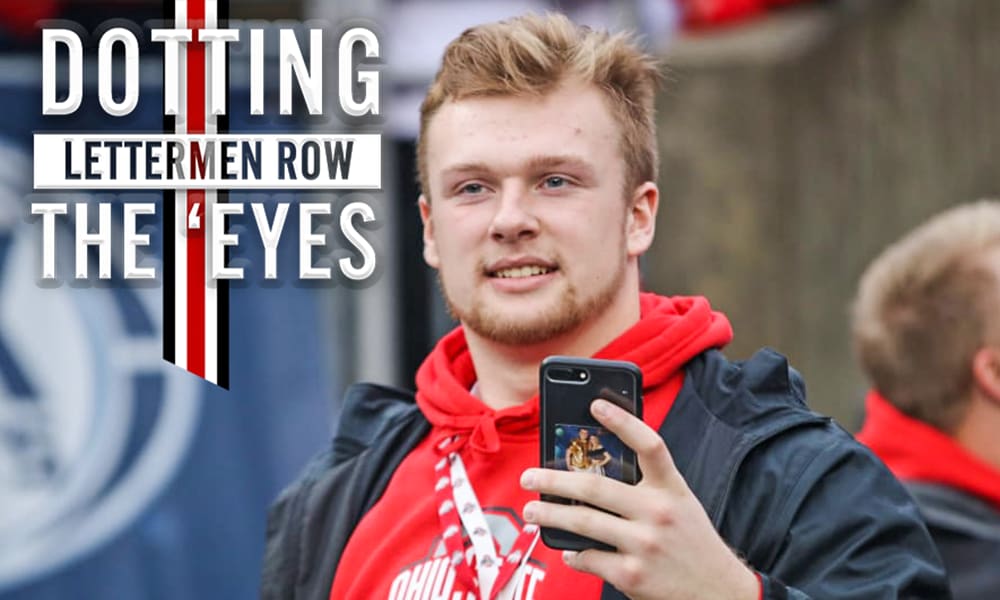 Stay in touch or be left out because Ohio State recruiting is a 24-hour, seven-day-per-week obsession. What’s the latest news as the Buckeyes build for the future? Get that and more Sunday through Thursday on Lettermen Row. Tonight we discuss the final list for a pair of top Ohio State targets and update a return visit to campus for a key offensive lineman.

The Buckeyes have four committed offensive linemen and are eager to add two more to the list. One of their top targets for much of the last year has been Ferndale (Wash.) 4-star guard Geirean Hatchett, and Ohio State received some good news on that frontWednesday evening when the country’s 10th-ranked guard prospect announced his top-5 schools on Twitter.

Thank you to all of the coaches that have recruited me. Very thankful for all the opportunities that have come my way. With that being said these are the 5 schools that I will be focusing on as my recruiting process continues! #cardclass20 #GoIrish #PurpleReign #GoBucks #20Deep pic.twitter.com/ZyM8MulFkk

The 6-foot-5, 275-pound Hatchett, Washington’s fifth-ranked player, has been to Ohio State twice since last June, including a three-day visit around the Michigan game in November. At the time, he wasn’t ready to narrow his list of schools.

“I have a mental checklist that a school has to check off all the boxes on,” he said in November. “Ohio State has to be able to check off all of those boxes for me before I take the next step. At this point, I haven’t found anything that’s missing from my checklist. I definitely still have to think about it a lot and see if it is the right fit for me, just like every other school.

“I’m still not ready to really narrow my choices down yet.”

Apparently he is now. Hatchett has taken down his list from more than 25 offers to five and will start scheduling official visits soon.

Ohio State remains in the mix for Jaylan Knighton

Another of Ohio State’s top targets released what appears to be his final schools on Twitter on Wednesday.

That is Deerfield Beach (Fla.) 4-star tailback Jaylan Knighton, the country’s fourth-ranked all-purpose back and one of the targets being recruited hard by Tony Alford and the Buckeyes. We wrote about Knighton in March to evaluate potential running back options beyond Bijan Robinson and Kendall Milton.

Knighton and Lawrance Toafili have had very good relationships with Alford and probably were under-rated as options, but one of the hangups for Ohio State had been a lack of a visit from the latter.

Well, Toafili is coming to town this weekend — he’ll arrive on Thursday at some point — but Knighton has no plans for that at this juncture and seems to be nearing in on a decision according to his tweet. He spent last weekend at Florida State, and there’s been a sudden surge of optimism there since for the 5-foot-9, 185-pound Knighton, who has also had Clemson and Oklahoma as early frontrunners.

Speaking of offensive linemen becoming a priority for the Buckeyes, Mars (Pa.) Area High School tackle Michael Carmody is returning to Columbus for the spring game this weekend.

Offered in February, Carmody was on campus in late March and left that trip with a renewed interest in the Buckeyes.

“Ohio State has definitely become a school I’m going to take a closer look into,” he said. “It felt really special there.”

Now the 4-star prospect is ready to get back to see what the Ohio State program is like on a quasi-game day. The purpose of this trip, which like the previous one will have him arriving and leaving on Saturday, is to just keep getting a better look at the Buckeyes.

“It’s just to get back on campus and spend more time with the coaches and players,” he said. “I was at Penn State last year for the spring game, so I wanted to check out Ohio State’s this year.”

Ohio State has recruited Maryland very well since the beginning of the Urban Meyer Era. And with Larry Johnson still on staff, there’s no reason to expect that to slow down, especially with defensive linemen. This weekend, Chazz Wallace from The Avalon School in Washington D.C. will make his way to Columbus hoping to earn an offer from the Buckeyes.

“I’ve been talking to Coach Johnson for some months now,” Wallace told Lettermen Row. “I went to camp last year and did decent there. Coach LJ came to my school in February, and we spoke and he wanted me to get on campus for a visit.

“He said, ‘We like you a lot at Ohio State, and we want you to get on campus and get to see it for yourself.’ I want to meet the Ohio State family and build relationships. That’s why I’ll be visiting this weekend. Friday I have a visit and Saturday I will be at the spring game. I have a good feeling about this visit.”

Wallace is a 6-foot-2, 290-pound defensive tackle with 10 offers, but earning an Ohio State offer would change his recruitment considerably.

“Ohio State definitely is a big deal,” he said. “I feel that an offer from them would make me blow up and receive lots of other scholarships. My freshman year I went to school with Chase Young at DeMatha Catholic, and Ohio State is a dream school of mine.

“Lots of great defensive linemen come out of there and go to the NFL.”