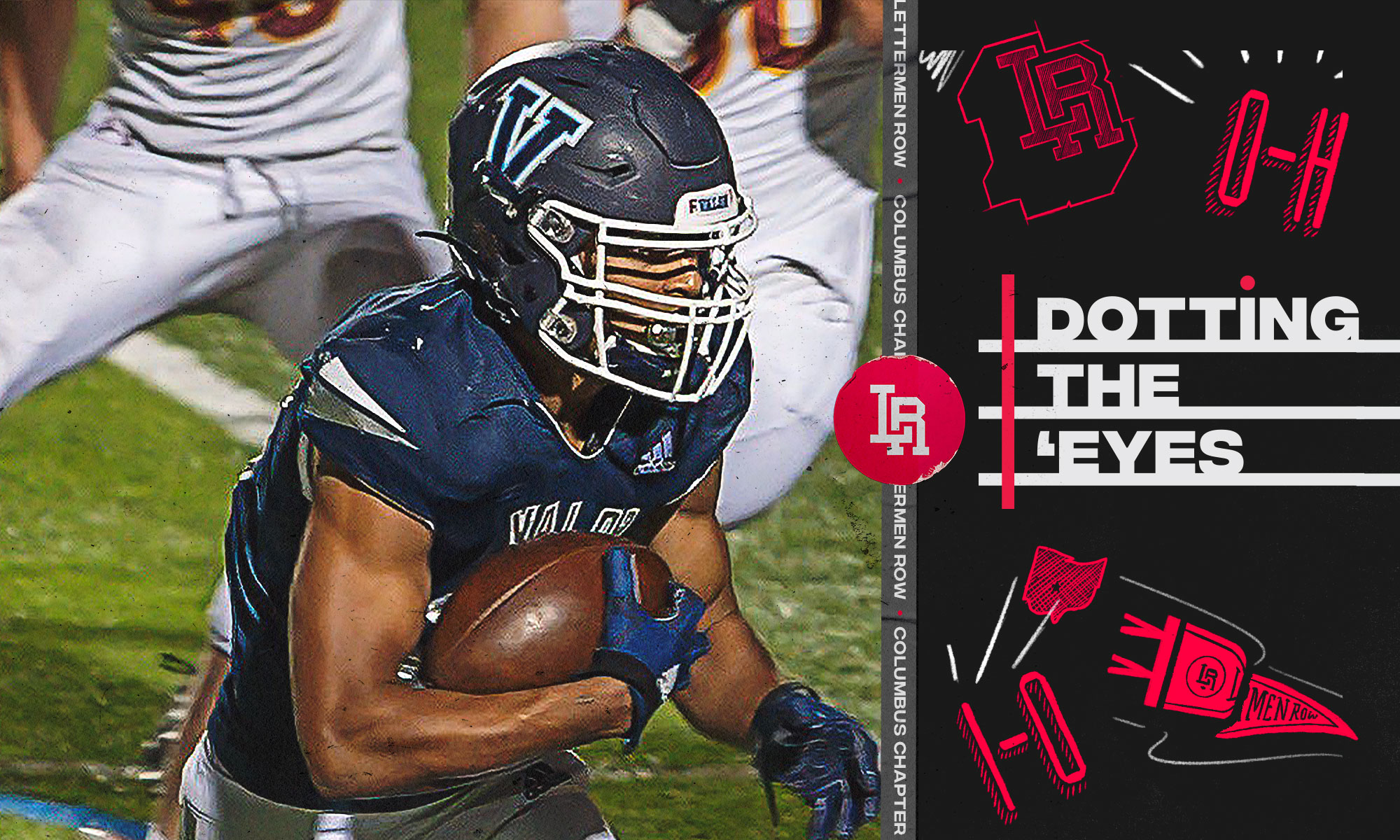 Stay in touch or be left out because Ohio State recruiting is a 24-hour, seven-day-per-week obsession. What’s the latest news as the Buckeyes build for the future? Get that and more Sunday through Thursday on Lettermen Row. Today we talk about tailback Gavin Sawchuk and introduce a new offensive line name to know in the Class of 2022.

There are a number of names that have been discussed at tailback in the Class of 2022, but we’ve not talked about Colorado star Gavin Sawchuk much. The 5-foot-11, 185-pound running back is the No. 2-ranked player at his position, and he’s remained in regular contact with Tony Alford over the last year.

“I have been getting recruited since my freshmen year,” Sawchuk told Lettermen Row. “I have had a lot of contact with a lot of programs. The great thing about Coach Alford is there was never pressure to talk all the time and be on Zoom meetings all the time.

“He would check in with me very often and we would chat often, but never made a big deal about it. I have a great relationship with Coach Alford.”

It’s that low-pressure, low-drama approach that keeps Sawchuk interested in Ohio State. It’s also one of the reasons he doesn’t get talked about much. He will make an official visit to Columbus the second week of June, one stop in what willl be a busy two weeks. The Valor Christian (Littleton, Colo.) standout will trek to USC, Ohio State, Oklahoma and Notre Dame in that span.

“At this point, it’s about getting around the players and experiencing the culture from the team,” Sawchuk said. “My parents have one request: They have to be able to fly into where ever I go easily.”

Sawchuk’s father grew up a Notre Dame fan. Because of that, so did Gavin. As he’s become a top recruiting target, the focus has gone away from teams and turned more to players, citing names like Christian McCaffrey and Alvin Kamara as offensive players he likes. His game is similar in style to that duo.

“I have played in many offenses growing up, and there is a way to be successful in all of them,” he said. “Ohio State does an amazing job running the ball and producing NFL backs. My position is running back, and that is what Coach Alford is recruiting me for.

“I can run between the tackles, outside and catch the ball well. I am a competitor and know there will be great talent where ever I go. The goal is to compete.”

Ryan Day has also been involved with Sawchuk’s recruitment, though it’s been primarily Alford.

“Ohio State was the fourth school to offer me back in 2019,” he said. “We have done a lot of talking and they have been out to the school a couple times prior to Covid-19. The first time I met Coach Day was on my unofficial visit. I was with Coach Alford on the field, and as soon as Coach Day saw us he came right over to talk to me.

“It was amazing to meet him and was extremely welcoming. After talking to me, he headed right over to my parents. Talking with him, I love seeing the culture he is continuing to build. He is a great guy.”

He visited Ohio State in June of 2019. The current plan is for a decision to be made this summer.

Though they were unable to talk to the coaches at Ohio State, a handful of key 2023 recruits made their way to Columbus for the Ohio State spring game on Saturday.

In-state prospects Luke Montgomery, Sonny Styles and Josh Padilla each showed up and spent their time hanging out together. 2022 commitments C.J. Hicks, Dasan McCullough and Tegra Tshabola did the same. 2022 prospect Delian Bradley, who will camp with the Buckeyes this summer, was also in the building.

Jordan Hancock and Jaylen Johnson were in attendance as well, with Hancock making the trip from Atlanta with his parents.

Apropos of nothing, here’s a little insight into the madness of the NCAA’s recruiting rules. Hancock, who signed with Ohio State in December, has been been able to sit in virtually on nearly every Buckeyes defensive back meeting this spring as he prepares for June enrollment. He has a playbook, a school issued workout plan and no restrictions on the contact he is allowed to have with the staff at Ohio State. The same thing goes for Johnson.

Yet, these two players were not permitted to have any contact with the Buckeyes coaching staff while inside the stadium on Saturday. Wild.

Ohio State has been in contact with offensive lineman Grayson Morgan, a 6-foot-5, 255-pound tackle from the Montgomery Bell Academy in Nashville. Greg Studrawa has been recently reaching out to Morgan, who currently has 23 scholarship offers.

“He has been showing me their practices with videos, and we’ve been talking for about a month now,” Morgan told Lettermen Row. “I like to see him coach, and he says he likes my athleticism.”

Morgan visited Columbus for the Under-Armour Camp Series on April 11. He and his father were able to make a quick stop on the Ohio State campus.

As has been expected since he announced a decision date two weeks ago, Kiyaunta Goodwin committed to Kentucky on Saturday. The Wildcats beat Ohio State, Alabama, Clemson and Michigan State for his verbal pledge. The reason was simple for Goodwin: Trust.

Ohio State will continue to recruit the massive offensive tackle and expects to host him for an official visit this summer.

Dallan Hayden has physical tools needed to be feature back at Ohio State
Payton Kirkland on recruiting plans, growing through adversity, Midwest roots