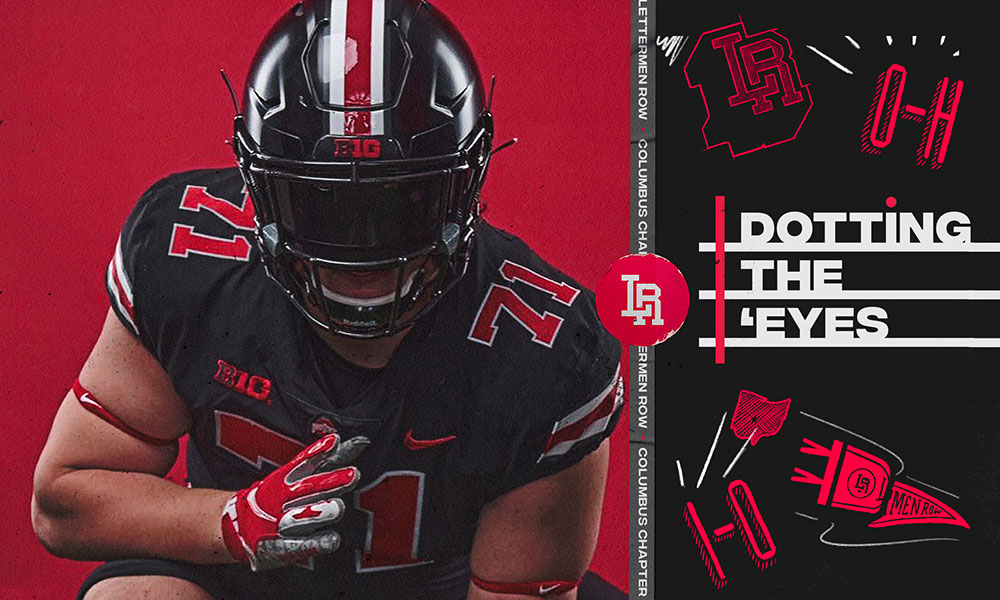 Ryan Baer got his first real taste of Ohio State and impressed the Buckeyes. What's next for the in-state star? (Ryan Baer/Twitter)

Stay in touch or be left out because Ohio State recruiting is a 24-hour, seven-day-per-week obsession. What’s the latest news as the Buckeyes build for the future? Get that and more Sunday through Thursday on Lettermen Row. Today’s notebook has the latest in the recruitment of.handful of Ohio State targets.

Last week, Ohio State welcomed in-state offensive line prospect Carter Smith for a hour-long workout with Greg Studrawa. On Monday, it was Ryan Baer who stopped into the Buckeyes facilities hoping to earn an offer from his home-state school.

Baer impressed the Buckeyes, according to sources within the program, and he says the feedback he received was very positive.

“The workout went pretty good,” Baer told Lettermen Row. “Coach Studrawa said he liked the way I moved for someone my size and he thought I bent well. He really liked the improvements since my junior year.”

Baer’s size is substantial. He’s a 6-foot-7, 335-pound offensive tackle prospect and the Ohio’s No. 13-ranked player makes no bones about the fact he’d love an offer from the Buckeyes. Notre Dame offered last week, so there’s some major momentum happening in his recruitment. For now, there’s still a holding pattern with Ohio State.

“They kind of are waiting on the numbers,” he said. “Coach Stud said he’ll be in touch soon. I’ll be keeping my eye on them.”

For the in-state player, the chance to see Ohio State up close was still something important. The visit was more than he expected.

“I’ve never actually seen campus before [Monday,]” he said. “The campus was beautiful plus the facilities and seeing all the equipment guys get. It’s crazy. It lives up to they hype. And finally getting to meet some of these guys was great.”

Baer made an official visit to Virginia over the weekend and his next trip will be to Illinois.

There’s a lot smoke around top Ohio State safety target Zion Branch following his official visit over the weekend. Branch and his family were in town Thursday through Sunday and yes, things went very well and there’s good reason to think the trip ultimately leads to a Buckeyes commitment.

But there’s no reason to expect it to happen anytime soon, at least not according to a few very dialed in folks that I’ve spoken with. Could that change? Yes, perhaps, but after nearly 14 months of waiting for the chance to make visits, its unlikely many kids will make instant decisions.

Zion Branch and his family have been planning to make a choice near the end of his senior season for a while now. When they left Columbus on Sunday, that was the timeline that the Buckeyes are operating on. Again, maybe there’s a window for that to change if the process wears him down more than expected but everyone Lettermen Row has spoken to suggests patience is key. Both Zion and his younger brother, 2023 receiver Zachariah, will be at USC this week and the Trojans are going to be going full-court press to try and stem the Buckeyes momentum.

Ohio State loves where it stands in the recruitment of both Zion and Zachariah Branch right now, that’s the bottom line.

There was a sense of serious Buckeyes momentum in the recruitment of Gabriel Harris following his camp visit to Columbus last week, but there was no Ohio State offer for the 2023 defensive end.

That changed Monday night when Harris announced his decommitment from Florida State and the reopening of his recruitment. Ohio State is now a prohibitive favorite in for Harris, who raved about Larry Johnson with Lettermen Row last week.

“Coach Johnson is the best coach I’ve been around so far,” Harris said. “When it comes to teaching and correcting he has a great way of using his words and what makes him unique is he doesn’t have to use profanity to get someone’s attention.”

Larry Johnson and Ohio State have the attention of Gabriel Harris now. He visited Georgia on Monday.

The Buckeyes recruited 2021 linebacker Jeremiah Trotter out of St. Joe’s Prep in Philadelphia, but he ultimately ended up at Clemson. On Monday, they made their first pitch to 2023 linebacker Josiah Trotter, offering him a scholarship following his first visit to the school.

“It was great,” Trotter told Lettermen Row about the visit. “I loved everything about it. The coaches are all close and they really are good people.”

Trotter is the country’s No. 11-ranked 2023 linebacker. He played at St. Joe’s with Buckeyes freshmen Marvin Harrison and Kyle McCord. He’s familiar with the Ohio State program but left impressed by just how well Mick Marotti and the Buckeyes staff develops their players.

“I knew they could develop players,” Trotter said.”But how they did a good job developing them physically was good to see.”

Trotter has been to Clemson, obviously, and says he sees similarities between Ohio State and the Tigers.

“How nice the facility and welcoming the coaches were,” he said. “They are very similar.”