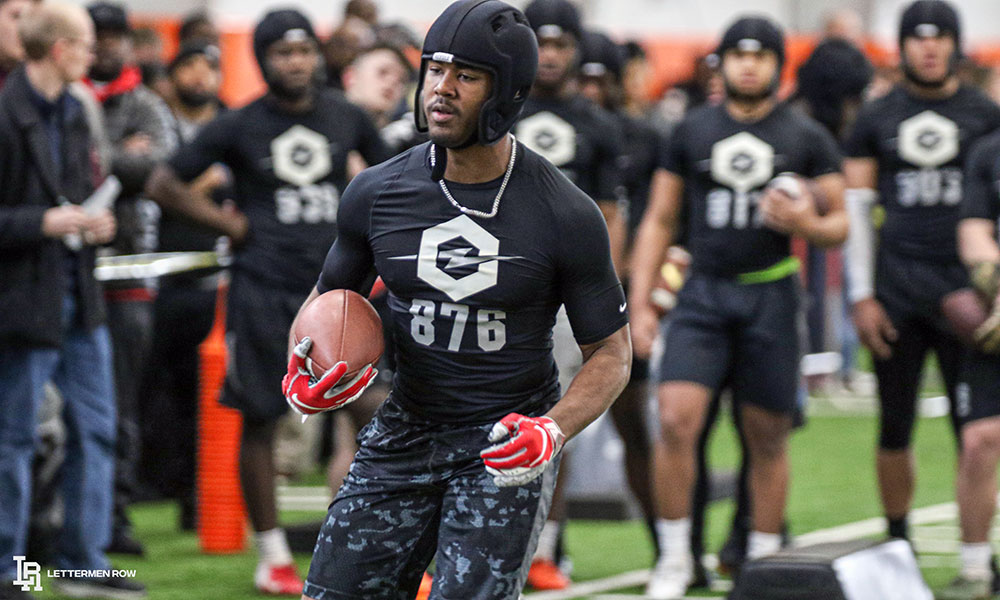 Donovan Edwards is set to embark on a pivotal visit to Ohio State. (Birm/Lettermen Row)

March is here, and the recruiting dead period of February is over for Ohio State.

Spring football is underway, and the Buckeyes are putting in work on and off the field.

Lettermen Row highlighted a few of those items in the February to-do list, and now we’re going to examine how the Buckeyes did during the recruiting downtime.

Let’s go back and check in on the three biggest items that Ohio State needed to take care of.

The item: Ohio State needs to set up spring visits for top targets

This one is kind of hit and miss for Ohio State, because quite simply put there are still a number of big-time players saying that they’ll visit the Buckeyes for a spring practice or the April 11 spring game. But some key targets like Emeka Egbuka, Troy Stellato, Tristan Leigh, Barrett Carter, Tony Grimes and others have not locked in a concrete date yet.

That’s not to say they won’t, of course, but they haven’t.

A number of big-time targets have set up visits, though.

The item: Buckeyes need to know which tailbacks are real targets

The most important position remaining for Oho State in the Class of 2021 is running back, and the three players who are the top prospects for the Buckeyes at that spot will all be in Columbus in the next four weeks.

That will begin this week with the two-day visit from Donovan Edwards and end over the April 11 spring game weekend when Virginia’s TreVeyon Henderson makes his first trip to Ohio State. Sandwiched in-between those trips will be a pivotal March 18 visit for North Carolina’s Evan Pryor, who is working toward a college decision within the next few weeks.

The Buckeyes want two running backs in the Class of 2021, and the absolute best-case scenario would be that two of those three stars end up choosing Ohio State. Is that too much to ask? Maybe, but the goal in February was to separate the real from the fake when it came to interest. The trio of Edwards, Henderson and Pryor are all proving to be very real possibilities.

The item: Ohio State has to find 2021 defensive backs

The addition of Kerry Coombs in mid-January meant that the new Ohio State defensive coordinator had to quickly get up to speed on the new crop of defensive backs around the country. It appears Coombs has done that.

According to his coach Robert Steeples, the Buckeyes will still be hosting St. Louis defensive back Jakailin Johnson in March. They’ll also welcome in Florida standouts Ja’Den McBurrows and Kamar Wilcoxson. Pennsylvania’s Derrick Davis might visit multiple times, and Coombs has quickly closed the gap when it comes to 5-star cornerback Tony Grimes while catching back up in the pursuit of Georgia 4-star Jordan Hancock.

Ohio State is also getting much more familiar with Cincinnati La Salle standout Devonta Smith, a rising-star in Southwest Ohio who remains very much in the mix for an offer from the Buckeyes.