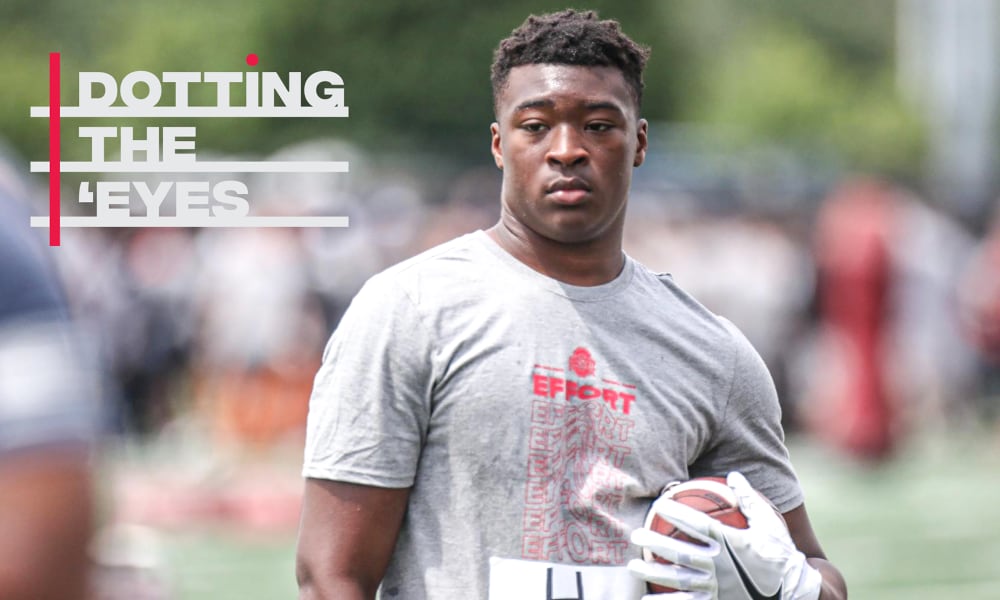 If Evan Pryor makes his scheduled visit to Ohio State next week it could be a very good thing for the Buckeyes. (Birm/Lettermen Row)

Stay in touch or be left out because Ohio State recruiting is a 24-hour, seven-day-per-week obsession. What’s the latest news as the Buckeyes build for the future? Get that and more Sunday through Thursday on Lettermen Row. Monday, we introduce a young California star to Ohio State fans and examine some key visits that are on the horizon for the Buckeyes — if they happen as scheduled.

Ohio State’s students and football players are on spring break but that doesn’t mean there’s any rest coming for the Buckeyes football staff. After a busy first week following the February recruiting dead period — which culminated in the Friday visit from top running back target Donovan Edwards — the Buckeyes are returning to work with an eye on a few important scheduled visits.

The key word here is scheduled because when it comes to unofficial visits, there are simply no guarantees.

So when key targets like running back Evan Pryor and defensive backs Jordan Hancock and Jakailin Johnson say they’re visiting, it’s good to be excited about the possibilities but it’s wise to temper the enthusiasm until a trip actually occurs. That is especially true now as the national perception changes in the recruitments of Pryor and Hancock and after Johnson took his first visit to always dangerous Clemson. Johnson’s first visit coincided with Hancock’s first trip back to see the Tigers in more than a year, a visit which resulted in an almost immediate crystal ball prediction in the favor of Dabo Swinney’s program from one of the most respected recruiting analysts in the recruiting analyst business.

So what does it all mean? What’s causing a sudden rush of recruiting momentum for North Carolina with regard to Evan Pryor? The Tar Heels have put together quite a recruiting run in the last few weeks and flipped former Buckeyes quarterback target Drake Maye from Alabama last week. Mack Brown has UNC up to the No. 4 spot nationally and there’s no doubt the Tar Heels are pushing hard for Pryor to stay home and lead them into ACC contention.

But Pryor has wanted to get back to Ohio State for a while now and is scheduled to arrive in the middle of next week. Would he skip that visit and pick North Carolina in the coming days instead?

My personal opinion — and well, it’s my column so deal with it — is that he won’t. I believe Pryor will visit Ohio State next week and if that visit occurs, that he’ll ultimately pick the Buckeyes. I believe the same for both Jordan Hancock and Jakailin Johnson, who are each on the early docket for visits on March 28, with a return trip just two weeks later in the works for Johnson. I believe if both of those visits happen at the end of March that Ohio State will land both Hancock and Johnson.

There are just two letters in it, but if is a big word right now for the Buckeyes and the Class of 2021.

Moving on from the could-be-imminent decisions of top 2021 targets, we’re introducing a name-to-know in California in the Class of 2023. Yes, a current freshman at Bishop Alemany High School in Mission Hills named R.J. Jones.

A 6-foot-1, 170-pound safety, Jones looks like a prospect set to emerge as the next next big thing from the West Coast and already has offers from USC, Oregon, Boston College, Baylor, BYU and Washington. He told Lettermen Row that like many young defensive backs across the country, he holds a healthy interest in eventually gaining the attention of the Ohio State coaching staff.

“Ohio State is one of my dream schools,” Jones said. “The atmosphere there. The way they play, the energy, the players they produce and of course all the games they win. Also, my mom is from the Midwest, she’s from Chicago.”

Midwest roots are one good way to increase early attention from the Buckeyes and one good way for the Buckeyes to capture the attention of top stars from around the country is to keep developing top NFL Draft prospects like Jeff Okudah. For Jones, the impact of guys like Okudah is hard to ignore.

“Jeff Okudah, he’s a real beast,” Jones shared. “He’s one defensive back I look up to heavy. It would be amazing to be able to communicate with defensive staff at Ohio State. What they do with the program is really amazing. It for sure makes them one of the top teams in college football. I’ve seen all their players do extremely well in the NFL also.”

The Buckeyes continue to grow their presence in California and that has — at least in Jones estimation — at least partially occurred because the local schools continue to struggle. It may not matter if they improve though, because Jones says he’s just the type of kid who wants to eventually get away for college.

“I think it’s because USC and UCLA have fallen off,” he ssid when asked why the Buckeyes brand seems to be growing in an area it hadn’t before. “But also because we want to see what’s outside of California. All those schools are trying to do something with their program but Ohio State just doing it bigger. I still love those schools though, they’re my home schools.

“Most of the people in California nowadays try and stay close to home, but me? I’m thinking I may try to explore and enjoy the whole recruiting process.”

“I gained a lot from that experience with him,” Carter, now a fast-rising 2022 prospect, told Lettermen Row. “I was just going into the my freshman year so I was out there with a lot of older guys but he kept preaching speed and pocket awareness.  I even took a drill from him that day and still do it.”

A lot has changed for Day and for Carter since that camp performance.

“I’ve grown three inches and have gained 20 pounds, I’m now close to 6-foot-4 and 220 -pounds, and mentally I’ve grown a lot,” Carter said about his growth since the summer camp visit. “I study film everyday and I’ve become more of a leader the older I’ve gotten.”

Carter has 13 early offers including LSU, Florida State, Texas A&M, Michigan and others but he’s hoping to capture the attention of new Buckeyes quarterbacks coach Corey Dennis when he arrives on campus at Ohio State again soon.

“I”m going up there in April,” he said. “I just told my coach I wanted to go and he said ‘OK, we’re going’ and I think he made a call. I feel like I could come in and learn what I have to learn at a place like Ohio State and be one of the most successful quarterbacks ever.”