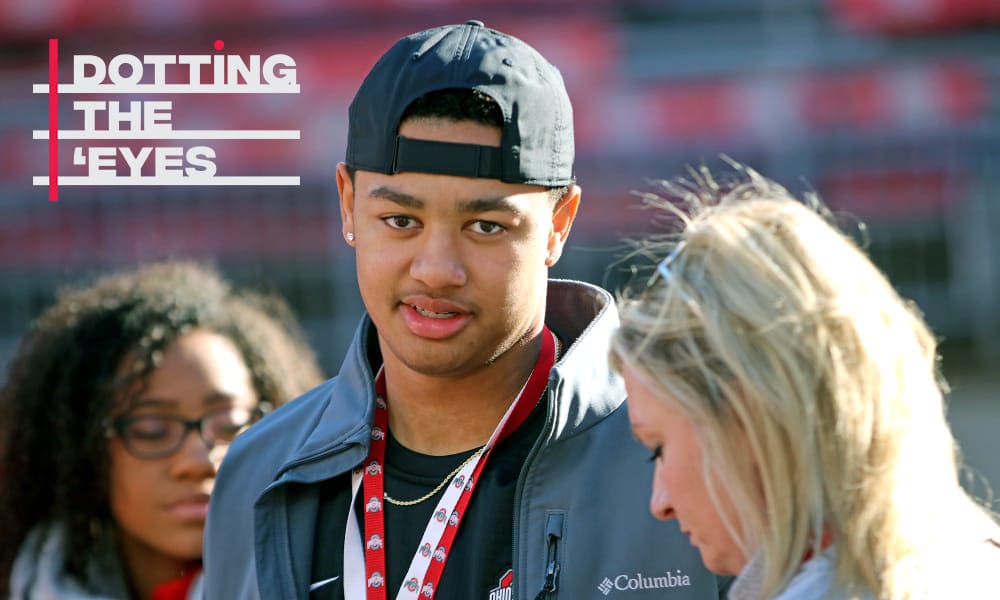 Jaxon Smith-Njigba continues to assault the record books in the state of Texas. (Birm/Lettermen Row)

Stay in touch or be left out because Ohio State recruiting is a 24-hour, seven-day-per-week obsession. What’s the latest news as the Buckeyes build for the future? Get that and more Sunday through Thursday on Lettermen Row. Sunday we examine two key pieces of information that came out of the Big Ten championship game

Ohio State picked up a big commitment for the 2020 season and beyond on Saturday night from offensive lineman Enokk Vimahi.

Yes, Vimahi is a freshman and obviously committed to Ohio State a year ago. But this weekend he told the media he was no longer leaving the program for the next two years to take a religious mission as he had intended to do when he arrived at the school in June.

“It was kind of a hard process for me,” Vimahi told Lettermen Row following the Big Ten Championship. “Because I know I had already established I was going to leave after this semester. Through much prayer and after talking with my parents, you know, it was best for me to stay.”

A decision of that magnitude isn’t quite as simple as Vimahi made it sound. But regardless, it’s good news for Ohio State and its offensive line depth chart, which could take a considerable hit following this season if NFL draft-eligible players like Josh Myers, Thayer Munford and Wyatt Davis were to test the professional waters.

Another bit of team-related news that could potentially spill over and have some recruiting impact was the absence of Buckeyes linebacker/safety Brendon White, who did not make the trip to Indiana for the Big Ten title bout with Wisconsin.

White was not on the Ohio State availability report provided by the Buckeyes on Friday, which adds an extra layer of intrigue to his not being present even though he wasn’t on the team travel list. On Sunday, Ryan Day was asked about White — last season’s defensive MVP in the Rose Bowl — but provided little detail on why the redshirt sophomore was not on hand, calling it “a personal matter.”

After bursting on the scene for the Buckeyes in the middle of last season, White seemed to be in a good position to become the face of the hybrid Bullet position. But he never was able to surpass Pete Werner for key playing time and did not play in the Buckeyes 56-27 win at Michigan despite a number of key injuries in the defensive backfield.

Jaxon Smith-Njigba continues to destroy everything in his path

On Friday the country’s No. 5-ranked receiver helped Rockwall (Texas) advance to the state semifinals for the first time since 1987. Smith-Njigba, who is the all-time leader in receiving yards in the 6A classification in the Lone Star State, scored six touchdowns and put up 243 yards.

HIGHLIGHTS: All @Jacket4Life could say after another ridiculous @jaxon_smith1 outing? “It’s unreal.”

But what is real is the fact that @RISDAthletics will be playing in a state semifinal for the first time since 1987 next week:https://t.co/ZYbX8kqynE pic.twitter.com/Tf7y7MGBBd

Though the performance seems like it’s old hat for Smith-Njigba, his coach, Rodney Webb continues to be impressed by how the 6-foot-1, 190-pound wideout handles himself.

“It’s not what Jaxon says, but it’s his actions,” Webb told the Dallas News. “He is leading the charge, and I just can’t say enough about him. … In the big games, the ones that matter, it’s unreal.”

Smith-Njigba needs just 62 yards to become the all-time leader in receiving yards in Texas, regardless of classification.

Another Buckeyes 5-star wide receiver, Julian Fleming, also added one more big game to his high school resume. For Fleming though, it was the final game of his prep career as he and the Southern Columbia (Catawissa, Pa.) Tigers steamrolled Avonworth 74-7. The game put the finishing touches on a season that saw the Tigers (16-0) win every game by at least 20 points. Fleming’s squad has now won three straight state championships and an unbelievable 48 straight games.

Fleming caught four passes for 124 yards and two scores, finishing off his career with 78 receiving scores, a Pennsylvania record. He is a finalist for the Gatorade National Player of the Year, an award that has gone only twice before an Ohio State signee.