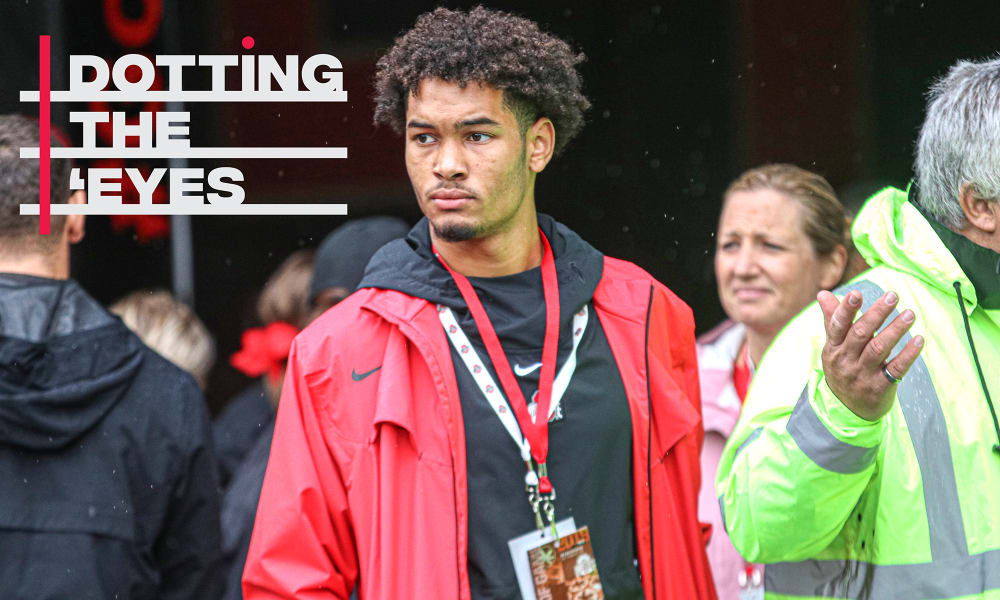 Emeka Egbuka left Columbus knowing once again where he stands in the eyes of Ohio State. (Birm/Lettermen Row)

Stay in touch or be left out because Ohio State recruiting is a 24-hour, seven-day-per-week obsession. What’s the latest news as the Buckeyes build for the future? Get that and more Sunday through Thursday on Lettermen Row. Monday’s notebook chats with Emeka Egbuka about his weekend visit to Ohio State and has the latest on a big in-state offer extended by Ohio State.

On Sunday afternoon, Lettermen Row tried to provide a breakdown of the big visit to Ohio State by 5-star wide receiver prospect Emeka Egbuka. That version of events was, for all intent and purposes, the view from the Buckeyes side of things.

Now, what about Egbuka? What was the visit like for him?

“I mean, to beat an opponent of that caliber sort of easily? It was pretty impressive. It was good to see how the receivers helped on the day — even with all of the rain and they still contributed.”

Egbuka spent the majority of his day hanging out with Ohio State verbal commits Jack Sawyer, Jayden Ballard and Reid Carrico. But he also spent more time hanging out with North Carolina 5-star target Will Shipley, a player who is considering many of the same schools he is.

The biggest thing for Egbuka and his mother, though was the opportunity to spend more quality time with the Buckeyes coaching staff. The trip was filled with the standard meet-and-greet full of platitudes and pleasantries, but it was more than that. It was a chance for Ohio State to reinforce what it has been telling the Steilacoom (Wash.) standout for months: He’s the guy at receiver in 2021.

“It is definitely important to me where I rank on the wide receiver board,” Egbuka said. “To know I’m the guy they are coming after the hardest makes me think they can really develop me the right way.”

What happens from here? Egbuka will begin working on narrowing his list of top schools from the 10 that it currently consists of now.

“I’ll probably narrowing down my list at the end of my season,” he said. “I’m getting closer to a decision.”

Just about a month ago Lettermen Row introduced readers to Streetsboro 2021 defensive tackle Mike Hall, an intriguing 6-foot-3, 275-pound defensive lineman who had caught the attention of the Buckeyes during a summer camp outing in June.

During that introduction, the message was simple: Ohio State was going to be watching Hall closely and monitoring his academic progress as a marker of sorts for a potential offer. Progress must be happening, because on Monday morning Ryan Day offered the junior lineman during an in-school visit to Streetsboro.

“He said he likes what he sees on film from me ever since I came to their Big-Man Camp in June,” Hall told Lettermen Row following the offer. “They’ve been keeping up with me and like how I move as a defensive lineman, especially just being a junior.

“It feels amazing to get that offer now.”

As an Ohio prospect, the urge to commit was there for Hall. But he’s holding off for now.

“I definitely tried the hardest to keep my composure because I was so excited, and it was definitely hard not to commit,” Hall said. “It’s what I dreamt about as a kid playing Pop Warner football. I honestly don’t know at the moment when I’ll be back down there, but I definitely can’t wait to be back in the ‘Shoe.”

“The visit yesterday was amazing,” the 6-foot-7, 275-pound Tiernan told Lettermen Row. “It was my first time down to Ohio State. I got to meet a lot of coaches which was really nice — even though it was raining a lot, I still loved the game.”

Growing up a Michigan fan, Tiernan said it was easy to remove his loyalties as he explores his options as a recruit. He and his family were blown away by Ryan Day and the Buckeyes.

“There was a ‘whoa’ moment for me when my parents and I were able to meet and talk with Coach Day,” he said. “My parents really loved him, they were amazed that before a huge game he was able to take some time to sit down and talk with us.

“I really enjoyed meeting him as well. He really cares about his players and about the team.”

“We talked a lot about how I was doing, how my school is going and how my family is doing,” Tiernan said. “He’s a tough coach, for sure. If you aren’t performing well, he’s going to let you know.

“But what I saw was right after that, he was back to coaching and telling you what you’ve got to do and how the line can do better. The offensive line did a much better job in the second half, getting guys moved and picked up a lot of the linebackers.”

There’s no plan for a return right now to Columbus, but Tiernan definitely intends to return at some point.

Jack Miller: Ohio State commitment solid, ready to ‘grow’ with Buckeyes
Can Buckeyes get back in mix for Bijan Robinson, Jaylan Knighton?