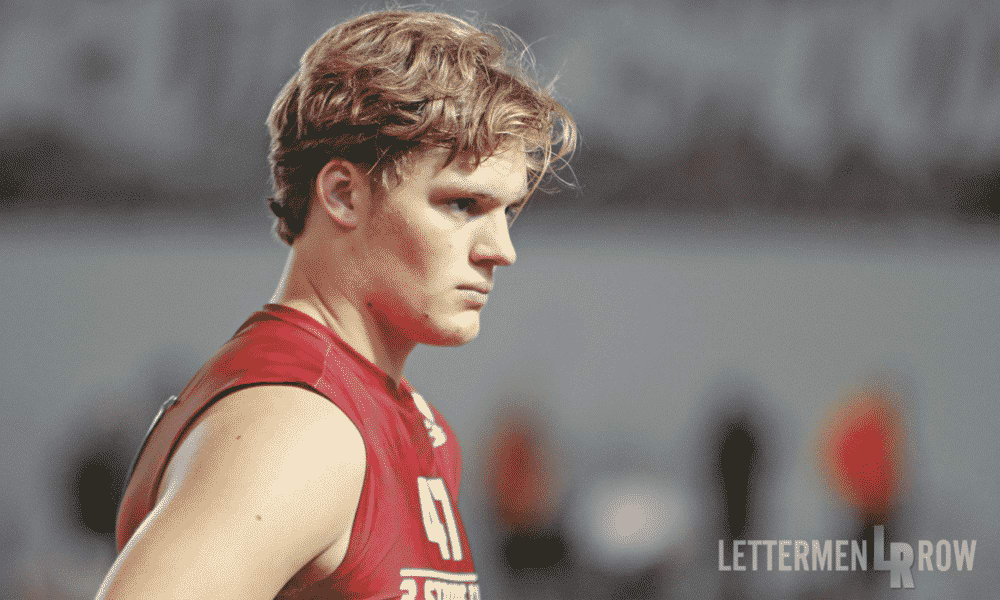 Ohio State will need to offer Braiden McGregor soon if they want to land the Michigan 3-star prospect. (Birm/Lettermen Row)

Ohio State trip could be big for Derek Wingo

The Buckeyes have a sterling reputation at St. Thomas Aquinas, the alma mater of Joey and Nick Bosa, among others. And Wingo, a 6-foot-2, 210-pound junior, is excited to be on campus.

“I’m excited to see just how I can fit into their system of play,” the 4-star prospect in the Class of 2020 told Lettermen Row. “I’m hoping to learn from [linebackers coach Bill] Davis and the linebackers at Friday Night Lights.”

Ohio State has offered Wingo, joining a list of 18 other schools that includes Clemson, Oklahoma and Georgia. He’s not ruling out the chance of a commitment during his trip but is staying level-headed. This trip is about establishing relationships.

“I’m looking to learn more on the personal side and how it would be for me if I were to be here for my college career,” he said. “As for a potential commitment, we will have to see through the whole weekend.”

Ohio State has not yet offered Port Huron (Mich.) Northern 2020 defensive end Braiden McGregor, but Larry Johnson and the Buckeyes got a good look at him during a one-day camp in Columbus earlier this month.

The 6-foot-5, 235-pound McGregor worked closely with Johnson and Ohio State verbal commit Noah Potter during that camp. The lifelong Michigan Wolverines fan came away impressed by what the Ohio State defensive line coach brought to the table.

“It was awesome,” McGregor told Lettermen Row. “He taught me so much.”

As noted, McGregor was a Michigan fan growing up, but the recruiting process has opened his eyes up a bit as he considers schools beyond just his and family’s rooting interest.

“It has definitely changed my opinion,” he said. “It’s not made me a fan of one school anymore. [I’m] watching all of them. My offers are Central Michigan, Western Michigan, Toledo, Notre Dame, Purdue, Nebraska, Michigan, Michigan State, Iowa and Wisconsin. There’s a little bit of pressure to stay close to home, but I’m going to do what’s best for me to get a great education and chase my dream of playing in the NFL.”

Where does the relationship with the Buckeyes stand right now? He visited the school in the spring and now for a camp. Is an offer on the table? Not yet, it seems.

“[Buckeyes coach] Urban Meyer told my dad and me that the coaching staff really liked me,” McGregor said. “Coach Johnson told me to call him and talk to him soon.”

Staying in Michigan and in the Class of 2o20, Bay City Central standout Devell Washington can officially RSVP to Friday Night Lights. After picking up an offer from the Wolverines following his performance at their one-day camp on Monday, the wide receiver who two weeks ago was just hoping to hear from the Buckeyes for their signature recruiting event recently got his wish.

“I didn’t get a camp invite from them,” he told Lettermen Row. “I hope I do because my mentor/big brother is from Columbus and goes there a lot, so that would be an easy trip depending on the date.”

That issue has been solved.

“Mark Pantoni sent the invite,” Washington said on Tuesday. “I’m all signed up. We are going to head to Columbus on Thursday. We will be staying like less than 10 minutes from campus.”

That proximity to campus should allow for a Friday morning or afternoon campus tour. It’s an opportunity he doesn’t want to miss.

“It’s exciting,” he said. “Ohio State is one of the most popular universities in the country. It will be something I’ll always remember.”

The recent offer from home-state Michigan means that a likely leader has emerged early in Washington’s recruitment. If the Buckeyes want to get into the mix, this weekend will be their chance.

“The whole process is fun and exciting,” he said. “But I was super happy about the offer. They loved my size, speed and physicality. It’s amazing. The last couple of days have been great and humbling at the same time.”

The Buckeyes are clearly serious about the 6-foot-4, 295-pound as well, though they’ve not yet offered. Originally from the Baltimore area, Huntley was thrilled to work with Larry Johnson, who is a bit of a legend around Maryland. He’s just one part of what makes the Ohio State program appealing for a lineman who has offers from six schools, including Georgia and Michigan.

“Coach Johnson is a coach that I’d like to play for,” he said. “It was great working with him on stuff, showing us a lot of the fundamentals and stuff like that. I was pulled into a group to work with him.

“I like the history and traditions of the program. They’re one of the best in the country. An offer from Ohio State? That would be up there for me.”

Ohio State wanted to see Huntley again this summer, but that isn’t in the cards.

“That was my second time at Ohio State,” he said. “I went in April and spoke with Coach Johnson and Coach Meyer, and this time I camped there. They invited me back for Friday Night Lights, but I can’t make that one.”

If the Buckeyes throw their hat into the ring, it could be a game-changing opportunity for the country’s No. 5-ranked defensive tackle. But he’s not hurrying to make a choice. He wants to make sure a school is the right fit for him academically as well.

“My parents wanted me to start thinking about academic choices early,” he said. “I’m just starting my junior year, so I’m not sure yet on when I’d like to commit. I am probably going to major in sports management with a minor in economics, so there’s a lot to consider.”