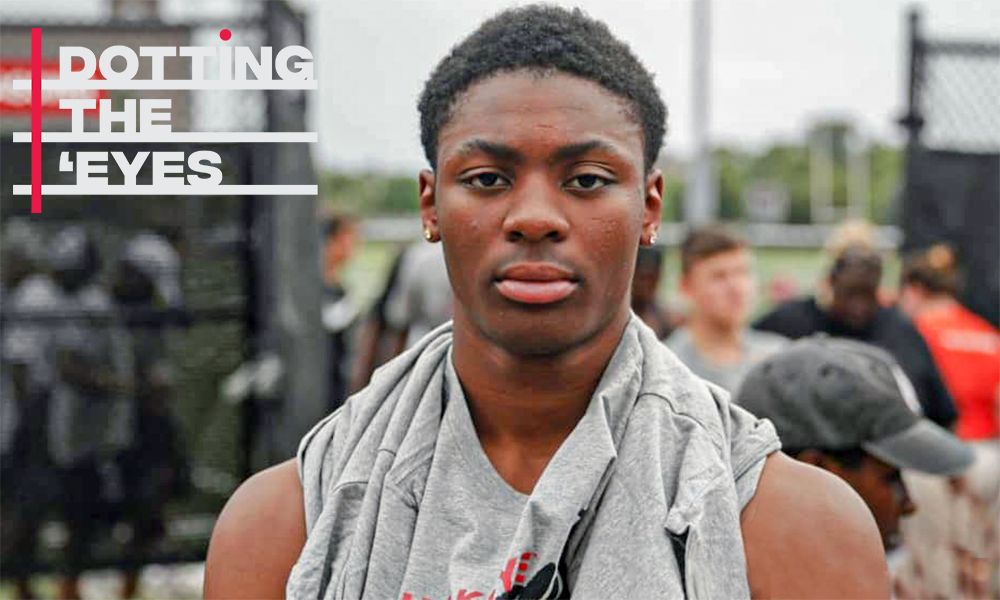 Derrick Davis visited Ohio State in January and a return visit could be in the works. (Birm/Lettermen Row)

Stay in touch or be left out because Ohio State recruiting is a 24-hour, seven-day-per-week obsession. What’s the latest news as the Buckeyes build for the future? Get that and more Sunday through Thursday on Lettermen Row. Monday’s notebook touches base with the family of Derrick Davis and introduces a young defensive back with Ohio State interest.

The country’s No. 2-ranked safety has seen a number of changes in Columbus from the time he first stepped foot onto the Ohio State campus, including three different defensive backs coaches, three defensive coordinators and two head coaches. For the 6-foot-1, 195-pound safety, the recent changes have provided a totally different feel to the program.

Davis and his father, Derrick Sr., were in Columbus in January as part of a very exclusive visitor’s weekend that included only him and a pair of Buckeyes commitments, Jack Sawyer and Michael Hall.

“He loved it,” the elder Davis told Lettermen Row. “And the vision that Coach Day has for the program — it’s very different, a very different approach from Coach Day. A lot of guys are the same [at Ohio State as under Urban Meyer], but the conversation and vision are much different.

“His ‘Circle of Care’ is amazing.”

Kerry Coombs was back in Columbus for the most recent Davis visit, and the two sides hit it off. Davis was one of the first players Ohio State reached out to when Sept. 1 hit last year, and it’s clear he’s still a top priority as he has been for the last few years.

“Derrick really loved how to direct Coombs was with everything,” his father said.

Ohio State, Penn State, Clemson, Notre Dame and Alabama are among the schools being talked about for official visits. The Buckeyes are sure to get one of them. The plan is to take one during the summer months, so that every facet of the program can get a closer look. The hope, however, is to get back to Ohio State for one more unofficial prior to those official visits happening.

After three-plus years of the recruiting process, the Davis family is winding everything down. But they’ve been able to keep a positive outlook on what can be a stressful process.

“It’s not been too bad,” the defensive back’s father said. “I told him from the very start to just have fun with the process. He has the final decision as to where he feels most comfortable for the next 3 to 5 years of his life.”

One of the Buckeyes most recent offers in the Class of 2021 went out to Plant City (Fla.) wide receiver Mario Williams. The country’s No. 4-ranked wideout has been quickly getting up to speed with Ohio State receivers coach Brian Hartline.

“It’s going good,” Williams told Lettermen Row. “I text with [Hartline] every day. I think he’d be a good coach. He talks to me about more life than football and how he can help me.”

The 5-foot-10, 170-pound Williams is trying to arrange his first visit to Ohio State. The Buckeyes offense is one of the main reasons he’s become interested in Ryan Day’s program.

“I’m trying to get up there,” he said. “I like the way they throw the ball and they have good quarterbacks.”

The Ohio State program is one of the country’s best, and it’s never a surprise to learn when young football players grew up with their eyes on the Buckeyes.

One such player is D.K. Friend, a 5-foot-10, 160-pound sophomore from Spring Hill, Texas, who also has some family ties to Ohio.

“Ohio State has always been one of my top schools,” Friend, who is still waiting on his first Division 1 offer, told Lettermen Row. “My grandfather was from Dayton, so we would always watch Ohio State games together.”

Friend has a few favorite Buckeyes, and those players reflect his own path toward recruitment.

“I grew up watching Terrelle Pryor, and I liked Marshon Lattimore and Ezekiel Elliott,” he said. “In little league, I played running back and safety, but I wanted to play quarterback. In middle school, I played running back, slot, and defensive back. When I was going into my freshman year I wanted to play receiver, but my stepdad said I should focus on defensive back.”

Last weekend, Friend competed in the Rivals.com Camp Series in Houston and made the highlight reel with a spectacular one-handed interception.

The young defensive back trains with former NFL All-Pro cornerback Antonio Cromartie and was thrilled to use last weekend’s camp to see exactly how he stacks up against the best of the best in Texas.

“It felt good to get out there and compete,” he said. “I train hard so I know I can compete with those guys.”

things are pickin’ up… er… being ‘discovered’….

Good to see you 68. A healthy approach to recruiting and looks more positive than ever before. Feel for the first time like we are in on every recruit