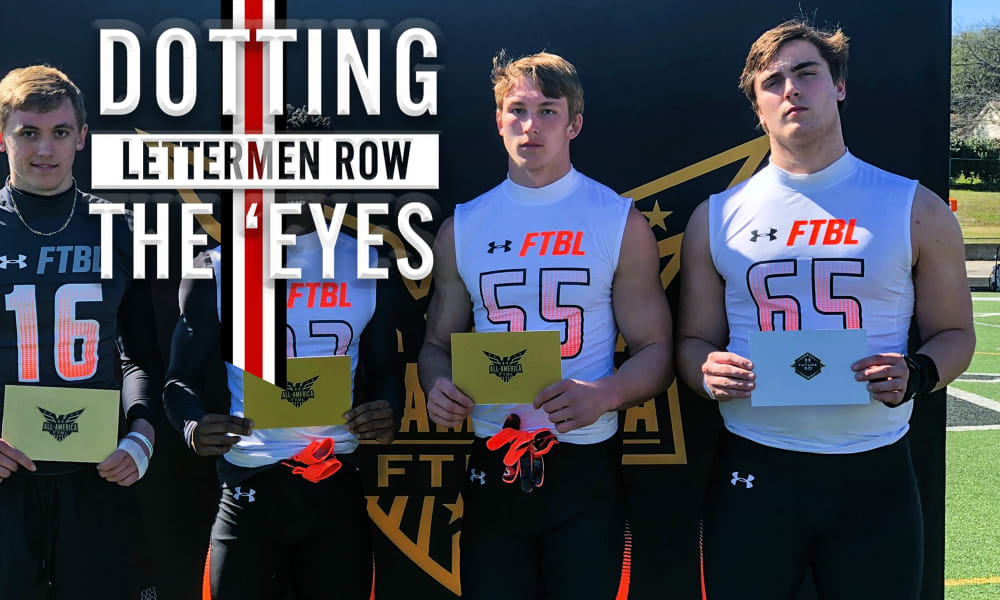 Stay in touch or be left out because Ohio State recruiting is a 24-hour, seven-day-per-week obsession. What’s the latest news as the Buckeyes build for the future? Get that and more Sunday through Thursday on Lettermen Row. Today’s discussion centers on Indiana 3-star Deontae Craig’s crazy last month, the efforts to connect with a 2021 offensive lineman from Texas and more.

In a 12-day stretch that began in early February, The Culver Academies (Culver, Ind.) 3-star defensive lineman Deontae Craig saw his recruitment get kicked into hyperdrive, landing scholarship offers from Ohio State, Notre Dame and Michigan. The Buckeyes and the Irish had always been his favorite schools to watch as a fan, but now as a recruit, the 6-foot-4, 230-pound athlete is trying to rearrange his entire thought process.

“Most people know that Ohio State and Notre Dame have been my favorite schools growing up, but it’s been more as a fan,” Craig told Lettermen Row. “So, now I’m trying to set that aside and just focus on finding out where I fit in the best and have the best chance of getting better.

“And hopefully some day achieving my goal of getting to the NFL.”

For the average person, it may be hard to understand what it’s like to get that kind of attention from three of college football’s most historically great programs. It’s hard for Craig to understand, too.

“I mean it’s been a blur to be honest with you, I’m just trying to take things in stride and use it as something to build off going into the summer and my senior season,” Craig said. “It’s definitely been fun getting to schools and talking to coaches, so ultimately I think that’s what is going to help me find the right fit. But at the end of the day, I know the man above is going to put me where I need to be.”

Right now, Indiana’s fourth-ranked prospect is still finishing up basketball season and then will start setting up his next round of school visits. Ohio State wants to get one of those for its spring game.

“Yes, they do,” Craig said. “I have no dates really set yet. I’m just trying to focus on finishing out my hoops season right now.”

This recruitment has all the makings of a classic Midwest battle from here until a decision is made. Ohio State, Notre Dame and Michigan will all be very much in the hunt.

Deontae Craig is making the most of his recruitment. (Birm/Lettermen Row)

If you think back to mid-January in mid-Ohio, there was a snowstorm that brought some nasty weather conditions to the Columbus area. It was a storm that forced the Buckeyes coaching staff to cancel a planned Junior Day weekend that was expected to bring All Saints Episcopal (Fort Worth, Texas) 2021 offensive linemen Tommy Brockermeyer and fullback James Brockermeyer to Ohio State.

The visit didn’t happen, and since then the 6-foot-6, 280-pounder has seen his recruiting star explode. He’s added offers from major programs like Michigan, Oklahoma State and LSU, and he already had an offer from Texas, the school where his dad and his older brother played. Ohio State isn’t inside of Texas, so while Brockermeyer has visited a handful of schools since, it’s been more of a challenge for the Buckeyes to get back into communication with the sophomore star.

“It’s challenging staying in contact,” he said. “But I’ve been talking with some of the coaches down there a little bit.”

One major point in the conversation? Rescheduling a visit to Columbus. So far, that’s not been worked out.

“We tried to reschedule during spring break, but we couldn’t find a time that works,” he said. “It’s a little frustrating but I have time to [make the trip].”

Buckeyes commit Jaxon Smith-Njigba doesn’t need to open more eyes. He knows where he’s heading for school, but he competed in Dallas at Nike’s camp because he wanted to see how he stacked up against the best of the best.

“I just went out there to compete,” the country’s 26th-ranked receiver told Lettermen Row. “To focus on getting good times. That was my second time running laser, and it was an improvement but I still got a long way to go, so I wouldn’t say I’m happy with it.

“I believe I could run faster.”

The 4-star prospect didn’t land an invitation to The Openings Finals — yet. But his combine score, good for fifth-best at the regional, showcases his elite and rare athleticism. He expects to get a call from the event’s coordinators and eventually land an invite to the prestigious event.

“They said I have a good chance [to be invited],” he said. “They are going to call me.”

Smith-Njigba will make his first visit to Ohio State since committing when he returns to Columbus for the spring game over the weekend of April 13.

Last week we mentioned that Ohio State may not be done looking for a graduate transfer offensive lineman because Georgia Tech’s Parker Braun was still on the board. His unique situation having two years to play one made him an intriguing possibility for the Buckeyes.

Cross Braun off the board now.

Per a family member of his, graduate transfer OL Parker Braun has committed to Texas. Braun was a two-time all ACC selection at Georgia Tech.

Ohio State had expected a visit from Virginia’s RJ Proctor last weekend, but when Jonah Jackson announced his commitment to the Buckeyes last Monday, that trip was no longer needed. The only reason Braun was still a possibility was because of his ability to take a redshirt year if he wanted to ahead of the chance to contribute in the 2020 season.