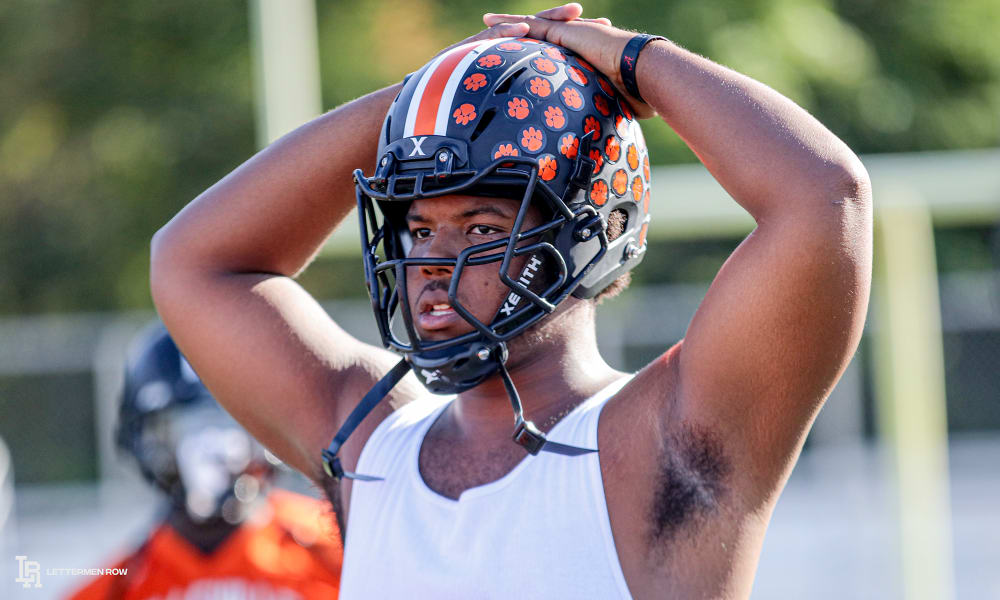 Damon Payne and Ohio State are still a possibility, but other priorities appear to have emerged. (Birm/Lettermen Row)

Have a question about Ohio State recruiting? This is the place for you, five days a week. Submit your questions on Twitter or on the Lettermen Row forums. Check-in daily to see what’s on the mind of Buckeyes fans all over the country. Today the question is about the defensive line and specifically Damon Payne, who was at one time considered a very strong Ohio State lean.

Haven't heard much in quite a while about him, is Damon Payne still a possibility for the Bucks?

Belleville (Mich.) 5-star defensive lineman Damon Payne is certainly still a possibility for Ohio State. But there’s no doubt that the Buckeyes are not as close as they once were.

Some of that is on the notoriously tight-lipped Payne, who isn’t regarded as the world’s best communicator. The truth is that schools can have a ton of interest in a player, but if the player himself isn’t interested in talking about his future or his present, it makes maintaining a real relationship pretty difficult.

If Payne wants to end up at Ohio State, he probably needs to give a bit more to the process. But if he doesn’t, there’s not a shortage of players for Larry Johnson and the coaching staff to go after, and that could be playing a part in the social distancing between Ohio State and Payne as well. Simply put, there’s no reason that Ryan Day needs to chase a player who is disinterested when there are near a dozen other big-time names highly interested in what Ohio State has to offer.

Payne is the country’s No. 3-ranked defensive tackle and a special player who the Buckeyes are very interested in landing. But in recruiting, programs have to be prepared for a player choosing to go elsewhere. And because of that, Ohio State is growing their relationship every day with 5-star defensive lineman J.T. Tuimoloau and 4-star one-tech Tywone Malone. The Buckeyes have a commitment from Michael Hall, a player that one source in Columbus called the “best in-state defensive tackle prospect in ten years.” Hall’s development and rise helped ease the burden a bit for Ohio State, without question. But the interest in Payne has been around far longer.

With Hall and 5-star defensive end Jack Sawyer committed and Payne’s recruitment at a relative standstill, the push to find complements on the defensive line has gone national. That’s led to rising interest in and from the aforementioned Tuimoloau from Washington, Texas native Tunmise Adeleye, big-time pass rushers like Maryland’s Demeioun Robinson, North Carolina’s Jahvaree Ritzie and Maryland interior lineman Marcus Bradley. I still believe the Buckeyes would prefer to find guys closer to home, like Payne, if he’s interested in that.

Recruiting is a two-way street and requires two parties in regular conversation. Some kids are interested in that, and some aren’t, at least not all the time. For top-level talents like Damon Payne, when it comes to being a top priority at any school, sometimes that starts and stops with wanting to be.

Birm, if we could get tywone over the center, and jt as a rush dt, and tumnise at de. Who or would you take another dlineman? Ie bradley, payne or demiuone?

Ps i have heard of sawyer compared to bosa. Isn’t he a little light? Or is he bigger than 230lbs

Ohio State’s 2021 class looks epic. If there is a position I don’t see a lot interest is OLB. Is it because of the 2020 class? It feels like OSU is in the trail position for their top targets.