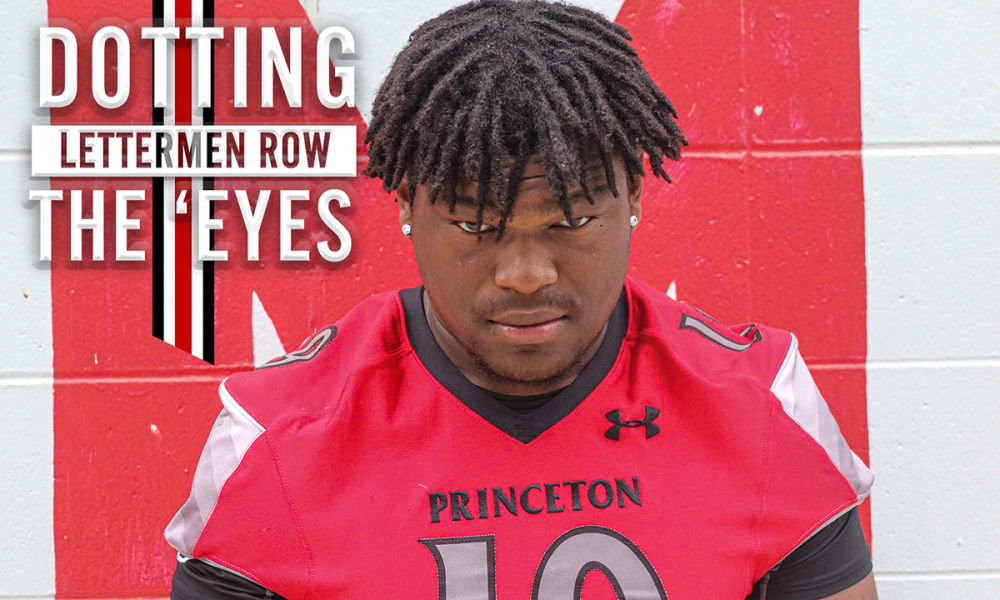 Ohio State commit Darrion Henry is healthy and back to full strength for the first time since last November. (Birm/Lettermen Row)

Stay in touch or be left out because Ohio State recruiting is a 24-hour, seven-day-per-week obsession. What’s the latest news as the Buckeyes build for the future? Get that and more Sunday through Thursday on Lettermen Row. Wednesday’s notebook talks rankings with Darrion Henry, checks in on Cincinnati running back Corey Kiner and more.

On Monday at Cincinnati Princeton High School, it was easy to see the changes that have been made by Darrion Henry since the last time I saw him during a one-day camp at Ohio State in June.

His body, for one, was much different. Henry looked much leaner. That’s a byproduct of getting back in the gym and watching what he eats more closely than ever before. The gym stuff, well that’s not really his fault. But it’s clear that after half of a year of rehab for a shoulder injury that required surgery last December, he’s finding his groove again. He’s down to 265 pounds after checking in to a national recruiting camp at almost 280 three months ago.

In February, Henry was a top 40-national prospect according to 247Sports.com composite rankings and considered a sure-fire, can’t-miss defensive line prospect. Somehow, despite no games being played and while he recovered from that offseason surgery, Henry saw his ranking tumble — including a near 500-spot drop in 247Sports.com’s own rankings.

It’s not something he understands. But it is something that he will use as fuel in what he hopes will be a comeback season to remember.

“I’ve just got to make them feel me,” Henry told Lettermen Row at Princeton’s Media Day. “I know what I am capable of, and if you put on the tape, it speaks for itself. I don’t know how someone can think there are 500-plus players better than me, but it really doesn’t matter.”

“I’m not one of the guys that’s all about the rankings,” Henry said. “But I’m like, ‘You know I had surgery?’ I wasn’t really tripping that much, and I laughed it off a little bit. But it was one of those moments where I’ve got to show them how I got there in the first place. It really humbled me more than anything, really.

“The rankings don’t make me. It’ll be noticed by how I play this year.”

Earlier this summer, Roger Bacon (Cincinnati) High School running back Corey Kiner, one of just five early offers extended from the Buckeyes to 2021 tailbacks, made a mistake on social media.

It happens to people all over the world every day, but most of those people aren’t having their every word scrutinized by folks who cover recruiting or by college football coaches who are trying to get to know you. Kiner’s mistake, though, wasn’t egregious or vulgar — it was just a simple retweet.

In the now deleted comment, Kiner retweeted and seemed to agree with, a tweet that was decidedly anti-Ohio State. That tweet was offered up by a Michigan commitment. And Kiner, who has visited Michigan many times, appeared to be playing to the audience.

Ohio State running backs coach Tony Alford saw the tweet, and apparently it didn’t take long for him to reach out to the young running back with an attempt to get to the bottom of the message.

“I definitely learned a lesson,” Kiner told Lettermen Row. “And I’m fine with Ohio State. [Alford] just made sure I wasn’t mad or anything like that. He said I can’t be posting things like that.”

How fine things are between the Buckeyes and Ohio’s seventh-ranked 2021 prospect will be obvious to see come Sept. 1. That day, when open communication between high school juniors and college staffs begins, is when that the 5-foot-10, 205-pound Kiner hopes will lead to some real relationship growth between Ohio State and himself.

“I haven’t talked to [Alford] much since June camp,” Kiner said. “July has been pretty busy for me, but I will start to pick contact back up with the coaches soon.”

The Buckeyes have a pair of cornerbacks committed in the Class of 2020 but have continued to search for a third in recent months. The majority of the attention has been paid to 5-star cornerback Elias Ricks and Oklahoma commitment Ryan Watts, but another player committed elsewhere continues to have interest in Ohio State.

That is Miami verbal Jaiden Francois, the country’s 24th-ranked cornerback and the 49th-ranked player in the state of Florida. A composite 4-star prospect, Francois visited Ohio State in an unofficial manner over the summer and has maintained his relationship with co-defensive coordinator Jeff Hafley since.

Francois, 6-foot and 184 pounds, told Lettermen Row he’s hoping to return to Columbus for an official visit and has a date in mind to do so.

After recording 12 interceptions last season, Francois is one of the country’s most talented takeaway artists. Will Ohio State take him away from the Hurricanes? If he makes that visit in November, there’s a good chance the Buckeyes could.