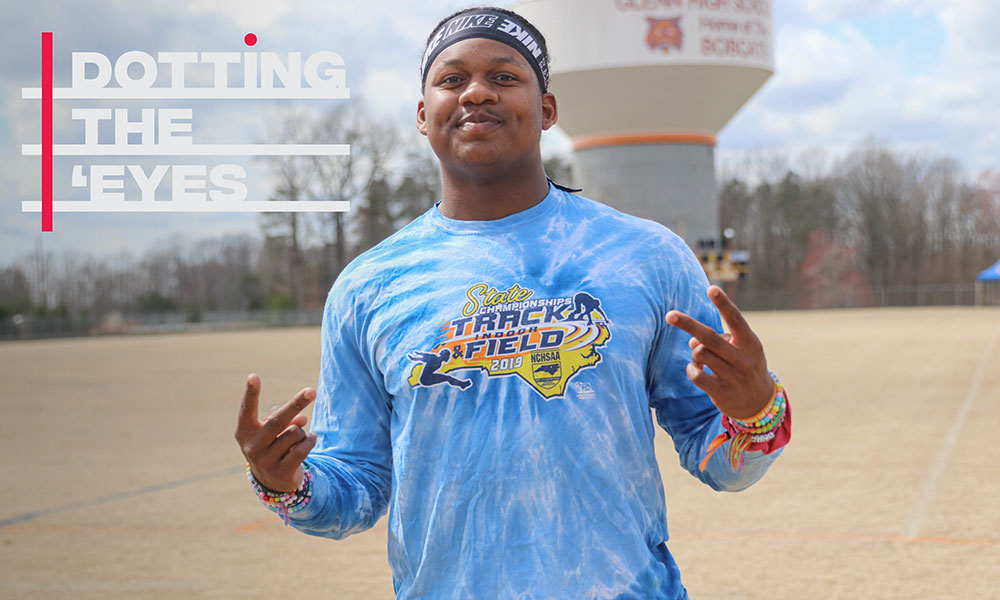 Jahvaree Ritzie was expected to make his first visit to Ohio State in April. (Birm/Lettermen Row)

Stay in touch or be left out because Ohio State recruiting is a 24-hour, seven-day-per-week obsession. What’s the latest news as the Buckeyes build for the future? Get that and more Sunday through Thursday on Lettermen Row. Thursday’s notebook has an update from Jordan Hancock on why he picked Clemson over the Buckeyes and more from our recruiting road trip this week.

Please forgive me for starting another column on Lettermen Row talking about the coronavirus pandemic that has gripped the nation and the world in recent weeks. Its impact is obvious, and there’s no way that something of this nature doesn’t eventually trickle down in the world of sports, the place that so many of us use for escape from real-world concerns — which I guess is why it feels so surreal when it does.

But the truth is that sports becomes secondary when something like this kind of potential crisis occurs, and it requires bold leadership to help put that in perspective, which is something that both Michigan and Ohio State stepped up to provide on Wednesday by being proactive in cancelling spring recruiting visits and activities.

The NCAA should require that all schools follow the lead of the Wolverines and Buckeyes. But until it’s mandated, the responsibility falls on the individual schools to get proactive, and both Wisconsin and Notre Dame did that on Thursday, taking the same precautionary steps with regards to spring recruiting. LSU cancelled a huge junior day it had planned for Saturday, and Rivals.com announced that it has cancelled its upcoming combine in Dallas. There’s no doubt that other shoe/apparel companies who run similar camps will follow suit as people everywhere try to get a handle on a situation that is changing at warp speed.

We cover Ohio State football, basketball and recruiting here at Lettermen Row, and it’s my intention to continue doing that with as close to a normal approach as possible. But we will also remain aware that we’re entering some potentially scary and bizarre territory for folks in the next few weeks.

Ohio State needs no reminders of the threat Clemson poses it, and that national rivalry received another shot in the arm when North Gwinnett (Suwanee, Ga.) High School star Jordan Hancock committed to the Tigers on Wednesday morning — three days after returning from Clemson, where he was visiting for the first time in over a year. Clemson offered Hancock in February, and the quickness with which it blew past Ohio State to not only become the leader in his recruitment but to land a commitment from one of the program’s top targets is rightfully concerning.

I believed Ohio State would be the ultimate landing spot for Hancock if he returned to Columbus for another visit. The Buckeyes were the unquestioned leader in his recruitment until he was at Clemson.

“You know I was really set on Ohio State,” Hancock told Lettermen Row. “My family and my friends knew I was going to Ohio State.

“I had an Ohio State [game] controller, Ohio State blankets. In my head I was committed to Ohio State. That one visit to Clemson changed my mind.”

Dabo Swinney and the Tigers have competed for national championships every year since 2015, and there are no signs or reasons to expect that a slowdown would occur. Beyond that, the reasons for Hancock picking Clemson were two-fold. One was the chance to be a little bit closer to home. Clemson is a 90-minute drive for Hancock, Ohio State is a 90-minute flight. Second was faith and how the Tigers emphasize it in their program.

“For me to take that extra step spiritually, Clemson is the place,” Hancock said. “That visit changed my whole perspective.”

Lettermen Row has mentioned it before, but religion and its role at Clemson is a major component of what it does. It’s a big selling point for some recruits and a bit of a turn off for others. A number of Ohio State staff members are open about their faith and don’t shy away from it on social media or in person, but it’s certainly not the primary talking point on recruiting visits as it is in Clemson.

And that’s OK. Every school provides something unique and different for each player and their families, and it’s up to them to prioritize what is most important for them. Ohio State will not stop recruiting Hancock, and the young defensive back received that message loud and clear on Wednesday night from the Buckeyes.

“I just got off the phone with [Ohio State linebackers coach] Al Washington,” he said. “He said he’s going to still come after me and still sees me as a Buckeye.”

I wanted to include this segment in Dotting the ‘Eyes on Wednesday evening, but the coronavirus concerns and the fact that I was in the car traveling back from North Carolina forced an adjustment in the notebook. So, here are a few additional notes from the LR spring break recruiting road trip that Austin Ward and I took this week.

The one thing that really caught my attention was Jahvaree Ritzie from Glenn High School outside of Winston-Salem. Ritzie is a legit 6-foot-5 and is very well put together at almost 265 pounds. This is an athlete playing defensive end, not just a big kid playing a spot because he’s big. The Buckeyes are serious about Ritzie, and he was going to visit for multiple days in April, so we’ll see how that works out now based on what the NCAA decides to do with cancelled visits. We’ll have a Birminology video with him in a few days, so be sure to check that out.

Backtracking to Charlotte, I thought it was very interesting to hear that there’s no real push from Evan Pryor’s family to get him to attend North Carolina. In fact, it felt like quite the opposite with his family actually encouraging him to leave the state. That could lead to good news for Ohio State in the near future, but now that he’s unable to visit next week, we’ll have to wait and see what happens with his decision timeline.

There’s a big-time young quarterback prospect who plays with Pryor at William A. Hough High School named Tad Hudson. Pryor believes Hudson, who is already about 6-f00t-3 and 200 pounds, will be in line for an Ohio State offer in then near future. He’s a 2023 prospect, so there’s a long way to go. But both Pryor and Matt Jenkins, the coach at Hough, raved about his potential.