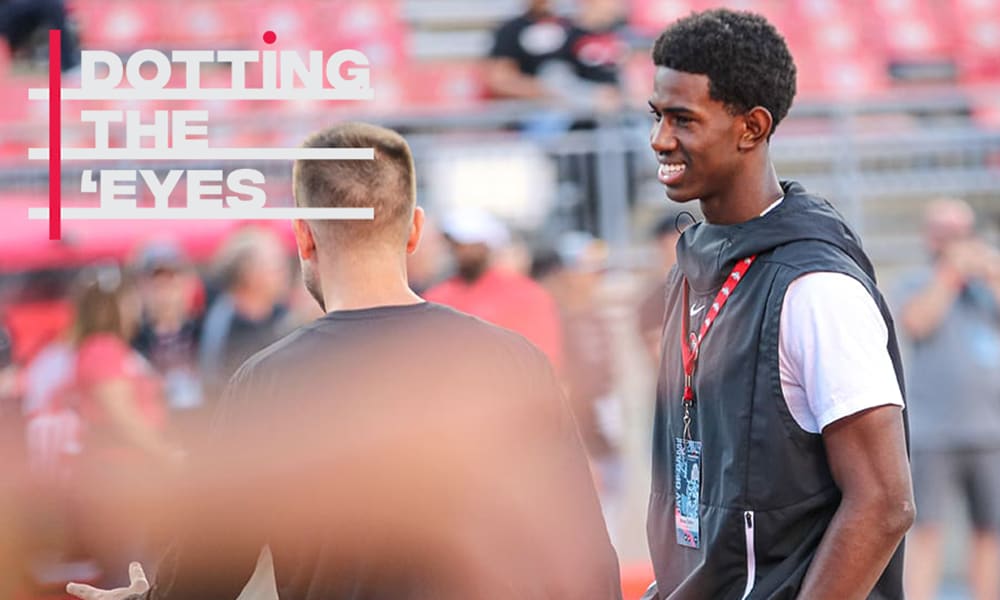 Stay in touch or be left out because Ohio State recruiting is a 24-hour, seven-day-per-week obsession. What’s the latest news as the Buckeyes build for the future? Get that and more Sunday through Thursday on Lettermen Row. On Sunday, we look at a busy recruiting weekend around the country, including at Clemson where the Tigers made a big splash.

There are not many times when Ohio State is at a true recruiting disadvantage.

But, if forced to pick a time when the Buckeyes are a bit behind the proverbial eight ball on the recruiting trail, January and February may qualify.

Never is that disadvantage more evident than weekends like this one. Being in a live recruiting contact period, programs around the country have to decide whether or not they will host big recruiting weekends — usually called Junior Days or something similar.

Ohio State usually decides against them. The Midwest in mid-January isn’t a real big draw for national recruits, and the inconsistency and unpredictability of the weather in Ohio this time of year can lead to a lot of cancellations even if travel was planned.

The weather is pretty good in South Carolina and the rest of the southern states, and that’s why Clemson is one of the schools that has made big moves in these junior day weekends over the last few years.

The Tigers just did it again. Dabo Swinney’s program has landed three commitments so far this weekend, and each player is one that Ohio State offered. The run of commitments began on Saturday night when Beaux Collins, a 4-star wide receiver from California, committed to Clemson.

Collins had been to Ohio State three times in the last year and was no doubt a major priority for the program, though the need for him in Columbus lessened in recent months as Jayden Ballard and Marvin Harrison jumped on board with Brian Hartline. As Lettermen Row wrote earlier this week, the Buckeyes are in a bit of a numbers crunch at receiver in 2021 already, and Collins had told us during a late-October trip to California that the commitment from Harrison was likely to have some impact on his eventual choice.

Ohio State’s recruiting efforts at receiver aren’t done. But Collins can now be removed from the list of potential additions. The Buckeyes and the Tigers are almost certainly going to go head-to-head for top target Troy Stellato and Washington 5-star athlete Emeka Egbuka, so the budding, on-the-trail recruiting rivalry between Hartline and first-year Clemson receivers coach Tyler Grisham should be fun to watch for the next few months.

Clemson then added commitments from defensive end Cade Denhoff and tight end Jake Briningstool on Sunday morning. As mentioned, both had been offered by the Buckeyes, but only Briningstool had made a visit to Columbus to this point.

The Tigers have also picked up a handful of 247Sports.com crystal ball predictions for California 5-star defensive end Korey Foreman, who made his way across the country this weekend to check out Clemson. Foreman is the nation’s top-ranked player, one spot ahead of Buckeyes commit Jack Sawyer. This visit to Clemson was his second. The Tigers also offered major Ohio State target Tristan Leigh, who visited this weekend as well.

Right now, there are no programs in the country that can sell what Clemson can. The Tigers are set up for a truly historic run that could last for another decade or longer, and they have virtually no one in their way in the ACC to stop them. There’s a realistic and reasonable expectation that Clemson will be in the College Football Playoff every year for the foreseeable future. That’s a pretty easy sell for recruits.

When Ryan Day took over at Ohio State, one of the first real noticeable changes was how he and his staff handled the recruiting process. Last January, Day had only been on the job a few weeks, so skipping the aforementioned junior-day weekends was easy to predict. He was trying to finalize the 2019 recruiting class and wanted to get all of his ducks in a row before welcoming in dozens of players at one time.

A funny thing happened at that time, though. Day and the Buckeyes realized that they didn’t want to do what every other school was doing. Subsequently, they put the junior-day idea on the backburner in lieu of smaller, more intimate weekends with top recruits that were more about relationship-building and not just a public relations play for social media.

The Buckeyes approach clearly has worked. But the big junior-day get-togethers are proving to be quite effective at Clemson, Georgia and other places like that. Maybe if Ohio State was in a different geographical location that was more conducive to big gatherings in the winter then it would change its mind. But the fact is that the Buckeyes also decided to get rid of Friday Night Lights last year — and that’s a midsummer production and therefore not a casualty of winter and all of its potential complications.

Fans will see the commits rolling in at Clemson this weekend and expect the Buckeyes to react to it, but that’s just not how things work. Day’s process is and has been much more methodical, and there’s no expectation for that to change. His aim is going to stay the same: Create relationships based on trust and real connection.

“When someone walks in the building, it’s the environment,” Day said last summer. “Because if we say we’re going to be a family, we have to be a family. If you send your son to Ohio State, he’s going to be taken care of. This program is going to be motivated through love and that’s part of being a family.

“What I say to our guys all the time, and what I say to the recruits is: ‘Who do you love the most in your life?’ And they all say their family. ‘What would you do for them?’ And they say anything. Well, why can’t we have that same relationship with our players and our coaches? That’s really what we talk about with our guys.”

Clemson had the country’s top-ranked 2020 recruiting class. And after this weekend, it has moved up to No. 2 in the 2021 class behind the Buckeyes. The Ohio State approach isn’t better than Clemson or anyone else, for sure. It’s just different, and that’s what the Buckeyes are banking on.

There is a sleeping giant down in Tallahassee, Florida with a new coach that will turn things around. I can see Fsu and Clemson trading off winning the Acc in the next few years. Mike Norvell is in the same vein as Ryan Day and will bring an explosive modern offense with him. Clemsons reign over the Acc is soon to be over.

For the rest of the country’s sake, I hope that’s the case. Someone has to step up and actually compete with Clemson in that conference.

As long as the NCAA turns a blind eye to southern recruiting, nothing will change. Georgia, Clemson, etc will continue to bring in a ton of recruits.

Let’s not go there. Leave the whining about recruiting tactics to the fan base of TTUN.

Exactly!! It’s embarrassing that our fanbase is always whining and accusing them of cheating

The accusations are a matter of sworn testimony in a court case…not sour grapes because we are getting out-recruited. The NCAA never seems to initiate any investigations and will only do so at the request of the school where the violations took place. That doesn’t seem weird to you???

So they spent the last month sniffen around michigan reruits that don’t want to come here and blowing off ones that did like
Cody brown ,Evan Pryor,Tunmise Adelye,landon Jackson,Tony grimes way to go

Hi John. You can keep writing this over and over and it doesn’t make it true.

I know I just want them to go hard after these guys .

Sint nobody in the account gonna challenge Clemson, they flat out dont have the players to do it. One of my favorite things about the Meyer years is I didn’t hear whining about the weather as a recruiting excuse…hopefully we can get back to that.

Only 11 kids can be on the field at one time and Ohio State can match anybody. The Buckeyes will be just fine thank you.