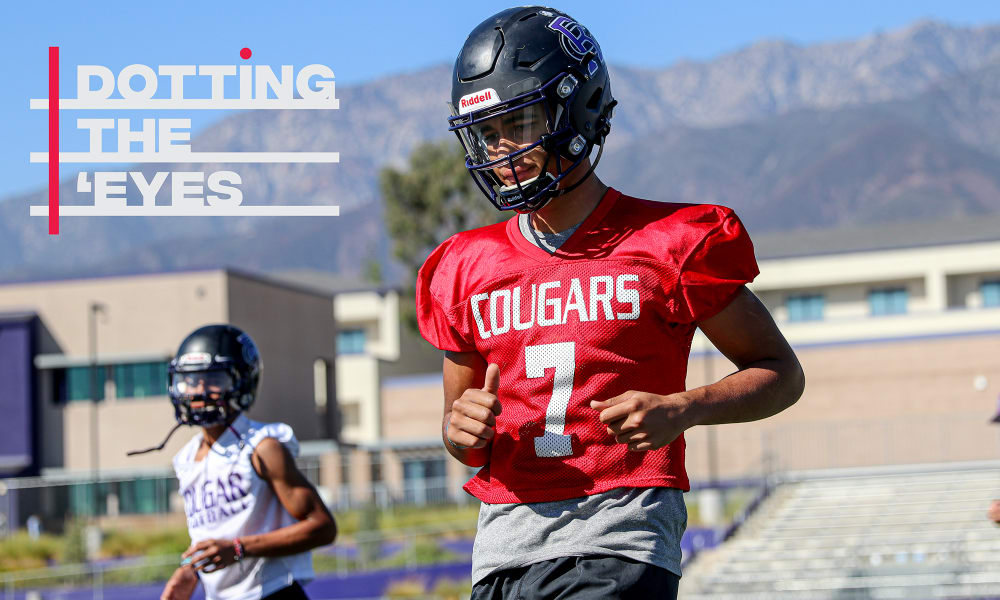 C.J. Stroud believes he's capable of being an NFL-caliber quarterback and thinks the Buckeyes offense is a good fit for him. (Birm/Lettermen Row)

Stay in touch or be left out because Ohio State recruiting is a 24-hour, seven-day-per-week obsession. What’s the latest news as the Buckeyes build for the future? Get that and more Sunday through Thursday on Lettermen Row. Sunday’s notebook has some thoughts on Buckeyes quarterback target C.J. Stroud, 5-star running back Bijan Robinson and some key recent stops on the recruiting trail for the Ohio State staff.

Is Ohio State team to beat for C.J. Stroud?

Is C.J. Stroud the guy for Ohio State as it looks for a second quarterback? That is perhaps the single biggest remaining question in the Class of 2020 for the Buckeyes.

Over the course of the last few days, Lettermen Row was in Southern California, taking some time to get to know a few Ohio State commitments and targets better. One of those was the Rancho Cucamonga 4-star quarterback, who led his team to a league championship on Friday night over nearby rival, Upland High School.

During our time with Stroud — Lettermen Row was at his school for about three hours on Thursday — it seemed obvious that his interest in Ohio State is genuine. When we left, the vibe was really positive for Ohio State and it seemed pretty obvious to the three of us who visited him that the Buckeyes were in a really good position to bring Stroud in opposite of Jack Miller in the 2020 recruiting class.

But there’s still a long way to go and a number of potential hurdles to clear before that vibe becomes something more tangible and more real.

The key things to know right now? First, Stroud is absolutely not concerned with whether or not there’s another quarterback already committed in his class. Oregon, Georgia, Ohio State and USC were all mentioned as likely official visit destinations, and each of those schools already has a verbal pledge from a quarterback.

What about Michigan? The Wolverines did offer Stroud last week when they learned that their long-time commitment, J.D. Johnson, was hanging up his cleats because of a medical condition. Obviously Jim Harbaugh’s program now has no commitment at quarterback, and it’s going to make a real push for Stroud — but that’s going to require a lot of relationship building in what could be a very short amount of time.

There are some conflicting reports on what Stroud is doing when it comes to the timing of his decision. But all we can base our thoughts on are his words: He intends to graduate early and sign with whatever school he picks on Dec. 18.

Georgia is going to get the first official visit, and that should be happening next weekend. Ohio State is going to get a return trip from Stroud, his official visit, in December — but that date isn’t set. He explains why in the latest episode of Birminology, but the cliff notes are that he wants more time with the Ohio State coaching staff. Visiting for the Penn State game would not be conducive for that because the focus would be on game preparation rather than recruiting and time spent in that arena.

USC remains in the mix, as does Michigan with Baylor living in the periphery.

As long as Stroud’s plan to sign in December happens, I think things are set up very well for Ohio State right now. But the Buckeyes will need to make sure that Stroud and his family know beyond a shadow of a doubt that they are a priority in addition to Miller.

Lettermen Row introduced Honolulu quarterback Jayden de Laura to readers a little over a month ago, and shortly thereafter he issued a verbal commitment to Washington State, a move that seemed to short-circuit any chance of him being the second quarterback in Ohio State’s 2020 recruiting class.

The Buckeyes haven’t quit evaluating de Laura, though, and quarterbacks coach Mike Yurcich went to Hawaii on Friday to watch the multidimensional 3-star athlete in person. That’s a clear indicator that Ohio State isn’t willing to put all its quarterback eggs into the C.J. Stroud basket — even if he’s the preference right now — as the push for a complementary player to Miller continues.

Buckeyes assistant coaches took advantage of the off week to see some major recruiting targets over the past few days. We’re not going to touch of all of them, but a few key names were checked in on by the Ohio State staff.

On Friday night, co-defensive coordinator Greg Mattison was in Wisconsin to watch 2021 defensive back Hunter Wohler. Over the course of the last two months, it’s been very clear that the Buckeyes have prioritized Wohler as highly as any other defensive back in the junior class, and to this point, that relationship is paying off. Of course Wisconsin can’t be dismissed in that recruitment, but the Buckeyes are very much in the game and in a position to pull off an upset by landing him.

Larry Johnson was in Texas last week and stopped in to see Pleasant Grove High School 5-star defensive end Landon Jackson, a player who has gone from long shot to real shot in a short amount of time for the Buckeyes. Jackson and Johnson met for the first time face-to-face, a key relationship-building moment before the 6-foot-6, 240-pound junior arrives in Columbus for the Maryland game on Saturday.

Johnson was supposed to see fellow Texas 5-star prospect Tunmise Adeleye on Friday, but the lineman told Lettermen Row that the long-time defensive line coach was delayed in North Carolina and unable to make the trip happen. Adeleye has been to Columbus once before and will be back in town when the Buckeyes host Penn State.

It’s never too early to find a good fit on the offensive line, and on Saturday the Buckeyes took the first step toward securing an eventual commitment from a player who could end up being a big-time national prospect.

Buckeyes linebackers coach Al Washington was the one who offered the talented 2022 prospect. Tshabola told Lettermen Row he was in shock upon receiving the news.

“It’s probably the most exciting news I’ve ever received,” he said. “My phone is already blowing up. It’s life-changing.”

Despite the longtime goal of landing an offer from Ohio State, Tshabola intends to take a little time before making any sort of decision about his recruitment.

“I spoke to my family,” he said. “They don’t think it’s a good idea to commit this fast. I should wait a little.”