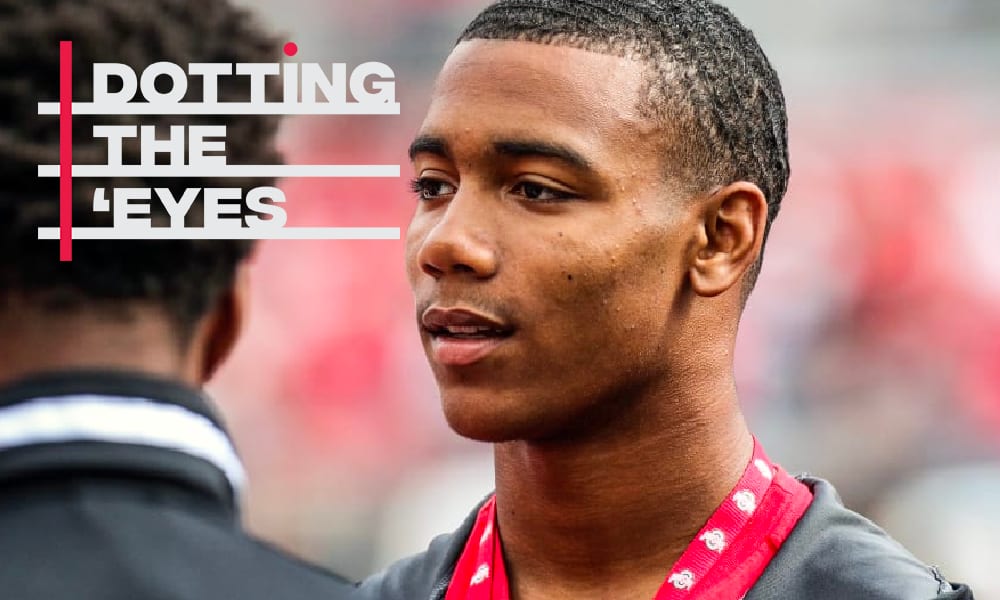 Ohio State continues to be on the mind of Dayton 2022 prospect C.J. Hicks. (Birm/Lettermen Row)

Stay in touch or be left out because Ohio State recruiting is a 24-hour, seven-day-per-week obsession. What’s the latest news as the Buckeyes build for the future? Get that and more Sunday through Thursday on Lettermen Row. Wednesday’s notebook talks with a pair of in-state sophomores and updates the recruitment of top receiver target Troy Stellato.

The top-ranked sophomore prospect in Ohio was once again back in Columbus last weekend.

Dayton’s C.J. Hicks, a standout linebacker/defensive back prospect from Archbishop Alter High School, made the short drive to campus to continue growing his relationship with Ohio State defensive coordinator Jeff Hafley and the rest of the coaching staff.

Hicks is usually understated, so his response shouldn’t confuse readers about the excitement he feels when evaluating his positioning with Ohio State. Things are advancing as well as possible for a player who is still very early in his recruiting process.

“I spent a lot of time with the coaches on Saturday,” Hicks said. “Coach Hafley and I haven’t really talked since the summer, so we did some catching up. And [Ohio State tight ends coach] Kevin Wilson and I just talked about how I’ve played and how my season is going.”

Wilson recruits the Dayton area for the Buckeyes and has been the driving force in communicating with the Alter coaches about Hicks. The young linebacker prospect has been told his name is often on the lips of Ohio State assistants in recruiting meetings.

“They really haven’t talked to me about anything about what’s next or an offer,” Hicks said. “The coaches tell me my name is in the meeting room a lot, though. I might come back up [for the Maryland game] for another unofficial visit.”

C.J. Hicks wasn’t alone during his visit to Ohio State last weekend. He was accompanied by a fellow Archbishop Alter defensive standout in the Class of 2022, defensive tackle Derrick Shepherd.

Shepherd is a 6-foot-4, 310-pound defensive lineman with a big future that is beginning to just now draw the attention of coaches around the region — including the Buckeyes, who invited him to the big contest against Wisconsin.

Big is the operative word here.

“The coaches, my relationship with them is good. They really liked my size. They said they wanted to see me back there soon.”

Shepherd is a sophomore, and because of a shoulder surgery that sidelined last summer, he didn’t get a chance to make his way through the recruiting circuit as he would have liked. That is probably the reason he’s remained under-the-radar as long as he has.

Next summer will be a different story.

“My return to the field, it has been good,” he said. “I came back faster and stronger than I was prior to my surgery. Ohio State coaches said they would like to see me back at a game soon and that I should come to their camps next summer. I can tell they’re a very competitive group. I plan to be in a lot of camps this coming offseason.”

Troy Stellato set to narrow list ahead of key visits

The Buckeyes are almost certainly going to be on a narrowed list of top choices for 2021 priority wide receiver target Troy Stellato when the 6-foot-1, 170-pound South Florida standout tightens things up. That move that is apparently coming soon.

Stellato just recently released his “top 12” after one of the craziest recruiting runs I can remember, racking up offers from programs from all over the country in September and October. Ohio State has hosted the Cardinal Gibbons (Fort Lauderdale) star three different times since April, and thanks to Brian Hartline and Keenan Bailey, it has emerged as one of the favorites to land him.

However, the work isn’t done yet. Stellato is still hoping to make on-campus visits to Florida, LSU and Clemson before any sort of verdict is reached in his recruitment. The trip to Clemson is scheduled for Nov. 16. If there’s going to be any movement here toward an early decision, it’s likely not to happen until after that visit occurs.