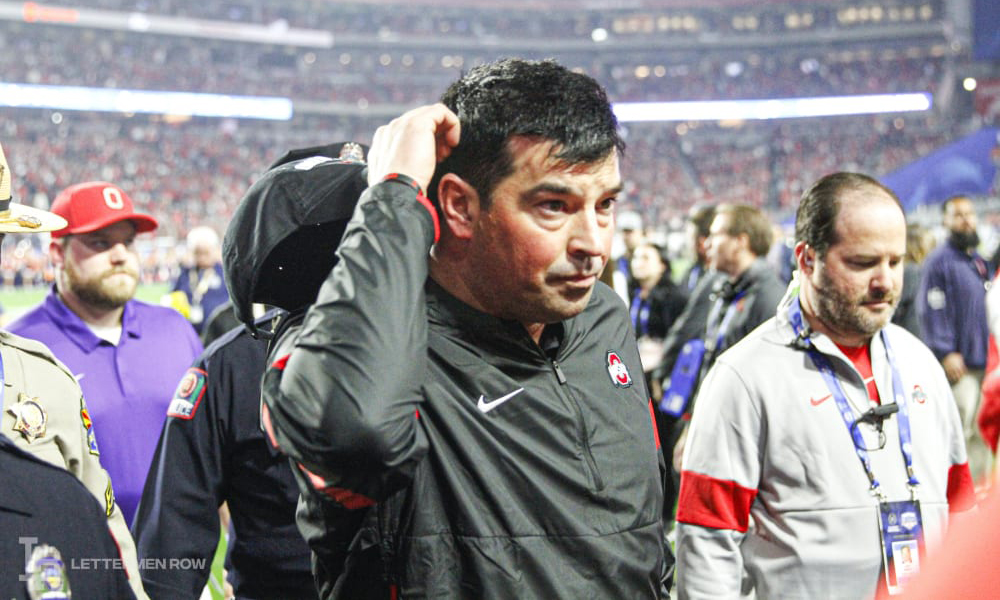 Ryan Day and Ohio State are going to be forced to answer some big questions. (Birm/Lettermen Row)

COLUMBUS — The worst-case scenario for Ohio State is here: The season is not happening this fall.

For the Buckeyes, their coaches and players, it’s a lost opportunity to play for a national title. It’s the loss of a season full of lofty expectations, hard work wasted because no one wanted to come together and put a plan together that made sense across leagues and individual institutions.

The decision to postpone — and to be clear that means cancel — is the final misstep in what’s been an embarrassing series of gaffes by the people who run the world of intercollegiate athletics.

And what’s worse? This decision doesn’t actually help provide any answers to the questions that have plagued the world of sports — and the world in general — since the onset of the Covid-19 pandemic six months ago. It’s been one great big game of kick-the-can, and it has left the young athletes who have worked their entire lives for the chance to play these games in the dark.

That confusion felt on college campuses and inside football programs is exponentially worse for the small percentage of talented high school athletes with the chance to play sports at the next level. Those young people, across recruiting classes, are being given no plan for the future, no path to resolution and no answers to the questions that will undoubtedly affect the rest of their lives.

What are some of those questions?

Why is it OK for students to be on campus but recruits can’t visit?

For six months now recruits have watched and waited. They’ve seen camps cancelled and visits postponed while youth baseball leagues, AAU basketball tournaments and a host of other national sporting events have returned to action. They’re now preparing for schools to reopen across the country and will be packed inside classrooms and hallways with thousands of students and teachers.

So why can’t recruits visit a college and talk to a coach in person in the highly sanitized, hospital-clean environment football programs have been adhering to for the last two months? For the Class of 2021 specifically, the never-ending dead period of the last six months has put them behind the proverbial eight ball in a way that they may never recover from.

What physical risk is there for kids and their parents in sitting in an office with a coach, with everyone wearing masks and having received Covid-19 tests per widely-accepted standards and protocols? What’s the harm in getting a tour of campus?

Young prospects not making visits to campus is one problem, but it leads to another: What is the plan for talent evaluation in the future?

No football happening and no in-person recruiting being allowed means that thousands of kids in the 2021 and 2022 classes are left without any chance to get seen by college evaluators. At that point, what’s the point?

Watching film from games played two years earlier provides little to no value, and that’s what college coaches are going to have to consider. If there’s spring football around the country, including in college football (which seems unlikely), how long can schools wait to extend offers and still be able to field a program in the future? How can Ohio State find players talented enough to continue competing on a national level?

How will recruiting signing periods work for Ohio State, others?

If there’s no football anywhere this fall — and that’s almost certainly going to be the case as state’s high school associations will follow guidance from the college level — how can any recruit sign in the December early-signing period or even in the regular signing period in February? What value is there in locking oneself into a commitment to a school when there’s no tangible plan for a return to play?

The structure of college football as its currently known is on the verge of a makeover, and the Letter of Intent could be one of the first things to fall.

Will scholarships be honored if there’s spring football?

Players currently on rosters are expected to have their eligibility restored from this missed season if they want to come back for the future, but how do schools honor every current scholarship while adding new classes? The 85-man scholarship limit can’t be enforced while allowing both of those things to happen.

How will a new number be decided? Will there be enough kids who want to play in a system that can so arbitrarily eliminate their livelihood and potential future?

Who should these players trust with the answers to those questions? What provides any confidence that after months of ineptitude and directionless leadership that these things can be addressed anytime soon?