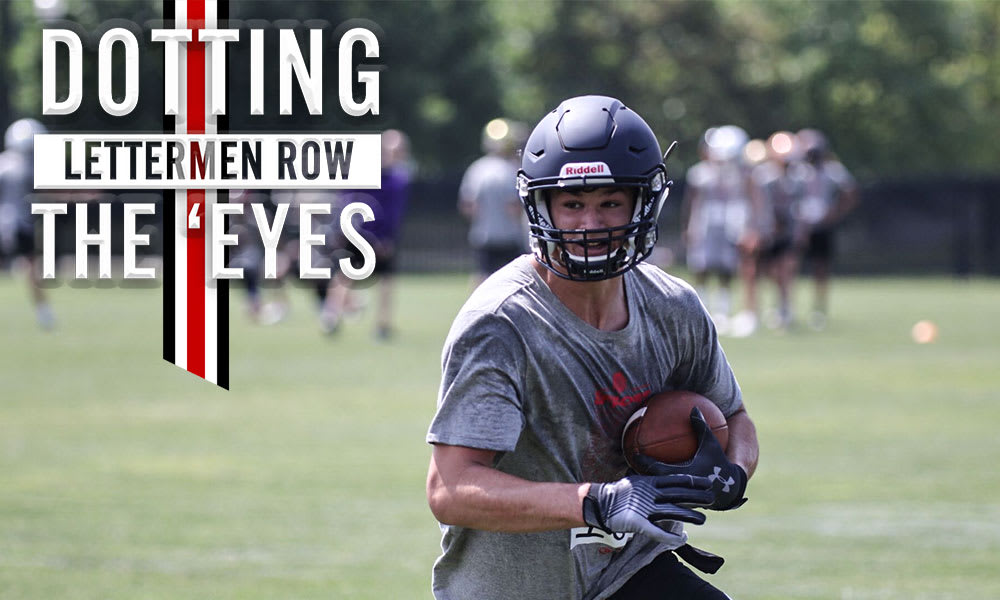 Stay in touch or be left out because Ohio State recruiting is a 24-hour, seven-day-per-week obsession. What’s the latest news as the Buckeyes build for the future? Get that and more Sunday through Thursday on Lettermen Row. Today’s notebook breaks down the news and notes from the first of Ohio State’s one-day summer recruiting camps.

The Thursday camp at the Woody Hayes Athletic Center pitted a pair of Ohio tight ends against each other for a spot in the 2020 recruiting class for the Buckeyes.

Alongside a host of other talented players, neither Luke Lachey nor Joe Royer disappointed in their battle. But rather than adding some clarity to the decision about an in-state tight end, the confusion may only be growing for the Buckeyes. As of publishing, both tight ends were awaiting word from the Ohio State coaching staff as to whether or not their performances, both impressive, were enough to earn a coveted Ohio State offer.

“Coach [Ryan] Day and Coach [Kevin] Wilson plan on sitting down to look over my film,” Lachey, a Buckeyes legacy, told Lettermen Row following the one-day camp at Ohio State. “They will get back to me within the next day. They both think I did good today at the camp, though.”

Royer also left campus without an offer, but the 6-foot-5, 230-pound was equally as impressive as Lachey. He, too, was told to expect an update from Ohio State within the next day.

“They said I did really well at the camp today,” Royer told Lettermen Row. “They said they will contact me tonight.”

The Buckeyes want a pair of tight ends in their 2020 class and could do much worse than offering both Lachey and Royer, in my opinion.

Dublin Coffman 2021 standout A.J. Kirk, the younger brother of former Ohio State All-American Mike Doss, did earn an offer from the Buckeyes on Thursday however.

Kirk, ranked early by 247Sports as the country’s fifth-best 2021 safety, had been waiting for the news from Ohio State for a while now. He didn’t camp in Columbus last summer, and that may have slowed his initial chances of earning the offer.

Thursday he camped and excelled, showing excellent burst and change of direction while being able to cover receivers comfortably in one-on-one situations. The Buckeyes told Kirk that he’s a perfect fit for the new Bullet position, and he put those talents on display on Thursday afternoon.

He expects to return to Ohio State on June 21.

This year’s camp has a new format, and the Buckeyes hosted skill players in the morning session and offensive linemen and defensive linemen in the afternoon. The Ohio State coaching staff was all over the field, as were coaches from almost 30 other colleges in and around Ohio.

Here are some of the more important items from the day.

Have Buckeyes faded with cornerback target Henry Gray?
Defensive backs targets for Ohio State are all over the map
Advertisement
Advertisement