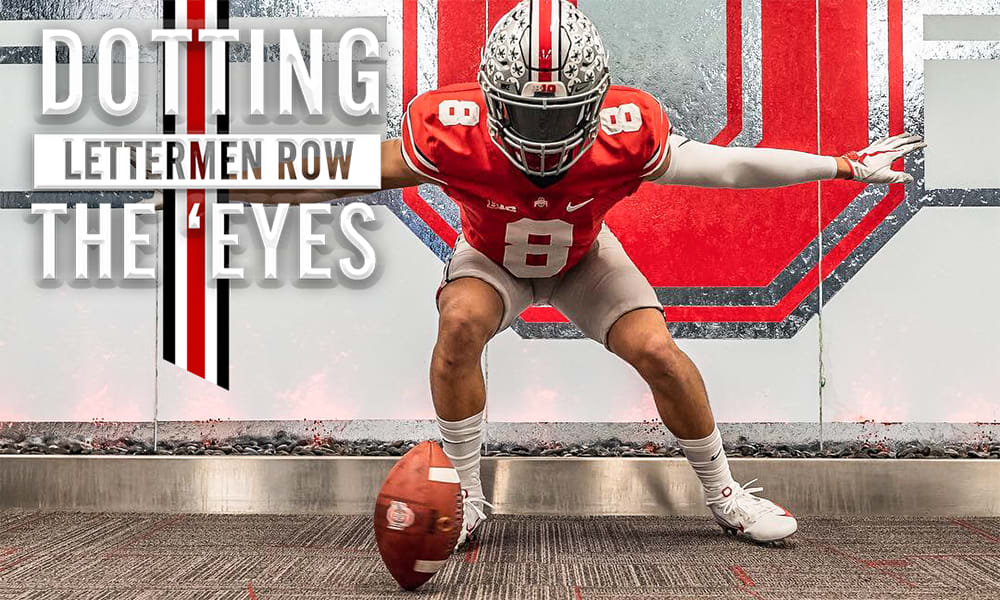 Stay in touch or be left out because Ohio State recruiting is a 24-hour, seven-day-per-week obsession. What’s the latest news as the Buckeyes build for the future? Get that and more Sunday through Thursday on Lettermen Row. Wednesday’s notebook has an update on three of the top remaining targets for Ohio State in the Class of 2020.

Though it’s not entirely a surprise for either, a pair of Tucson (Ariz.) Salpointe Cath0lic stars have now made their college decision dates official: 5-star running back Bijan Robinson will announce his commitment on Aug. 2, and 4-star safety Lathan Ransom will do the same next Tuesday.

Ransom’s date had been discussed for the last few weeks, but he tweeted the news on Tuesday just shortly after 247Sports.com released the news on Robinson. The Buckeyes are competing against Texas for each prospect, with USC still in the mix for the country’s fourth-ranked tailback and Notre Dame still attempting to lure Ransom, the fourth-ranked safety in America.

On Tuesday, there was a run of 247Sports.com crystal ball predictions suggesting Robinson to Ohio State. And while there are plenty of reasons for the Buckeyes to be optimistic about the pursuit of the 6-foot, 200-pound tailback, sources close to the program have indicated that no decision has been shared with them to this point. Folks close to Texas have told Lettermen Row that the Longhorns haven’t been notified of any choice either.

So hang tight on that one for a few weeks.

With Ransom, the wait will be much shorter, and the buzz from Notre Dame corners remains positive. There have also been conflicting reports about whether or not Texas even remains in the running. What we know is that the Buckeyes had the last official visit, and there is a lot of confidence from Ohio State commitments that he’ll pick the Buckeyes next Tuesday. But Ransom himself is playing things relatively close to the vest still.

The Arizona duo wasn’t alone in confirming their decision date on Tuesday.

Deerfield Beach (Fla.) 4-star running back Jaylan Knighton confirmed that he’d choose his college at the end of July also, as expected.

Knighton has been to Ohio State just once, but the buzz in South Florida has been in its favor since well before that trip. The work done by Tony Alford and company during his official visit looks to have firmly cemented his preconceived notions about the Buckeyes.

Though Florida State has long been the program most closely associated with this recruitment, indications that Miami has developed into a real threat shouldn’t be ignored. Knighton is a former Oklahoma commitment, and things have a way of staying weird with Florida commits, so no matter what happens on July 30, don’t expect this recruitment to be on cruise control until signing day.

This week, with the recruiting dead period in full effect, we’re trying to shed some light on what’s still a possibility in the 2020 class for Ohio State. The Buckeyes have been on an impressive run in recent weeks and have answered most of the questions for Ryan Day and his staff in a short amount of time, but there are still some left unsolved.

Check out the other questions we’ve tried to answer from Monday and Tuesday, if so inclined.

If Elias Ricks doesn’t flip to Ohio State, will they still chase another cornerback?

There is a lot of discussion about Elias Ricks and the Buckeyes, and some of that has been provoked by the talented defensive back himself. During his time at The Opening in Texas, the 5-star cornerback didn’t deny that he was still considering schools like Ohio State and Alabama — it was and even reportedly suggested that if Urban Meyer hadn’t retired, he’d be committed to the Buckeyes by now.

Instead, three weeks after Meyer’s retirement Ricks committed to LSU. He has been to campus there multiple times since, and though he tried to dispel rumors about his family moving to Baton Rouge, they have persisted as he decided to leave Mater Dei (Santa Ana, Calif.) High School in order to facilitate early graduation. Right now, there remains no official announcement about where he’ll finish his high school career.

There is speculation that he’ll end up at the IMG Academy in Bradenton, Florida. And if that comes to fruition, the rumblings about Ricks could intensify because one of his best friends is Buckeyes verbal Lejond Cavazos. ]And if Ricks ends up at IMG, it’s a safe bet that those two would pair up as roommates and counterparts at cornerback for the Ascenders.

Despite the talk and the regular communication between Ricks and the Ohio State staff, the odds of a flip aren’t great barring a complete program overhaul at LSU this season. Still, the Buckeyes are on the prowl for another cornerback in this class, and Ricks is at the top of a very short board.

Ohio State isn’t out of the mix for Miami Central’s Henry Gray, despite the momentum in that recruitment heading elsewhere at the moment. There are other players, like Oklahoma verbal Ryan Watts, Oregon pledge Luke Hill and Miami commitment Jaiden Francois who remain in the conversation as well.