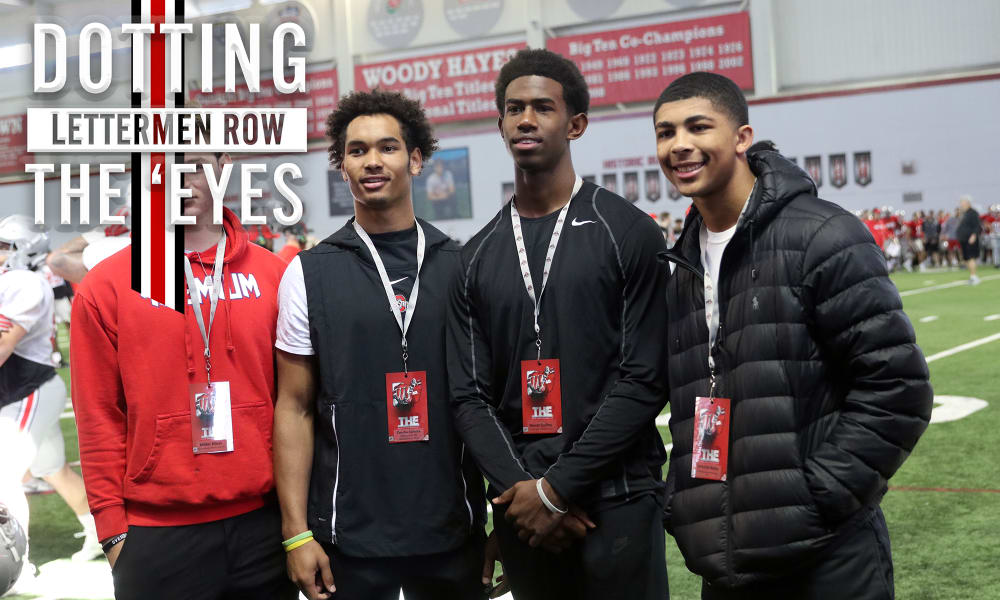 Emeka Egbuka, Beaux Collins and Lorenzo Styles are all very interested in the Buckeyes. (Birm/Lettermen Row)

Stay in touch or be left out because Ohio State recruiting is a 24-hour, seven-day-per-week obsession. What’s the latest news as the Buckeyes build for the future? Get that and more Sunday through Thursday on Lettermen Row. Today’s update checks in on a host of 2021 receivers interested in Ohio State and a handful of new offers extended by the Buckeyes.

The Buckeyes hosted three of the country’s best 2021 receiver prospects over the weekend, and if the reports coming from that group are a real indicator, Brian Hartline’s position group could be a special one for years to come.

“Coach Hartline talks about the art of being a receiver like nobody else I have been around,” likely 5-star prospect Emeka Egbukaa told Lettermen Row. “Ohio State will be hard to top.”

The Buckeyes have continued to recruit Pickerington Central standout Lorenzo Styles Jr. extremely hard, and the Ohio State legacy was on campus Saturday.

“I had a great time,” Styles said. “There was a bunch of top wideouts there. It really felt special.”

One of those receivers was St. John’s Bosco (Bellflower, Calif.) star Beaux Collins, who made his second visit to the school in two months. The 6-foot-4, 190-pound Collins feels very much at home in Columbus.

“I got to see a full campus tour this time,” Collins said. “I also got to see the intensity of their practice and how Coach Hartline coaches. I would say Ohio State is a leader for me right now. The system of competition within the receiver group but also creating a great brotherhood lead by coach Hartline is what makes it a great place for me.”

The Buckeyes are going to be in a battle for Miami Central 4-star cornerback Henry Gray, but after his three-day trip to Ohio State this weekend, it appears they are well positioned to win it.

The nation’s sixth-ranked cornerback arrived in Columbus late Friday night and departed on Tuesday morning. Reports from sources around the program called the visit “awesome,” and they hinted at some confidence they’ve done what was necessary to move the program to the top of the list for the 6-foot, 175-pound Gray and his mother, who accompanied him on the trip.

While I believe that the Buckeyes are in a good spot here, I’m not willing to write it off as a done deal. Gray’s recruitment could still extend for a number of months, the interest in the Clemson football program is very real and I believe ultimately the choice will come down to those two programs. The Buckeyes have a very favorable depth chart for a young cornerback, and that’s appealing to Gray without question.

Ohio State wants to add two tight ends in the Class of 2020, and the coaching staff continues to search all over the country to find them. This past weekend, it was Texas 3-star Blake Smith who made his way to Columbus for some one-on-one time with Ohio State.

Ohio State has not offered the 6-foot-4, 245-pound Southlake Carroll prospect, but TCU, Cal, Boston College and a handful of others have. The Buckeyes have suggested one could come down the road, but right now the first visit was just about letting Smith and his family get to know what Ohio State has to offer.

“An Ohio State offer would change a lot of things,” he said. “It’s a family atmosphere, it’s very competitive and everyone takes pride in their work. They all have the same vision. I love the coaching staff. We toured the campus and football facilities, saw the stadium and High Street and went to some good places to eat. I was basically at the football facility for my whole trip.

“There are not a lot of other places like it. It’s different.”

Ohio State was very busy with recruits on campus last weekend and offered a handful of new prospects. We introduced you to 2021 quarterback Jack Brandon on Monday, but there were a couple more offers that are worth watching closely moving forward.

Blessed to receive an offer from The Ohio State University.!! #BuckeyeNation #GoBucks pic.twitter.com/38p3CXOGfS

Rooks is a 6-foot-4, 245-pound defensive tackle prospect, and he was in town with his mom and dad. He’s also visited Michigan and Louisville and has offers from Auburn, Notre Dame, Michigan and Penn State already.

Greg Crippen, a 2021 prospect offensive lineman, was also offered by the Buckeyes.

Received an offer from THE Ohio State University #IMGFam pic.twitter.com/3z85FpXzYN

Crippen has 10 offers now and that includes Alabama, Michigan, Notre Dame and others. He’s not currently ranked, but his early scholarship list is going to certainly draw a lot of interest as will his 6-foot-4, 280-pound frame.

Finally, the Buckeyes offered another prospect from St. John Bosco (Bellflower, Calif.) over the weekend. That is linebacker prospect Kourt Williams, the nation’s 29th-ranked outside linebacker and a 4-star prospect by the folks at 247Sports.

Today was an absolute success!! After a great unofficial visit I can honestly say that Ohio State in one of a kind! I’m excited and truly blessed to say that I’ve been offered an official scholarship to THE Ohio State University‼️‼️ #GOBUCKEYES pic.twitter.com/ojrxollqRF

Williams was one of the handful of Braves who ventured to Columbus over the weekend. He’s told Lettermen Row that he Buckeyes are now one of the top schools on his list.