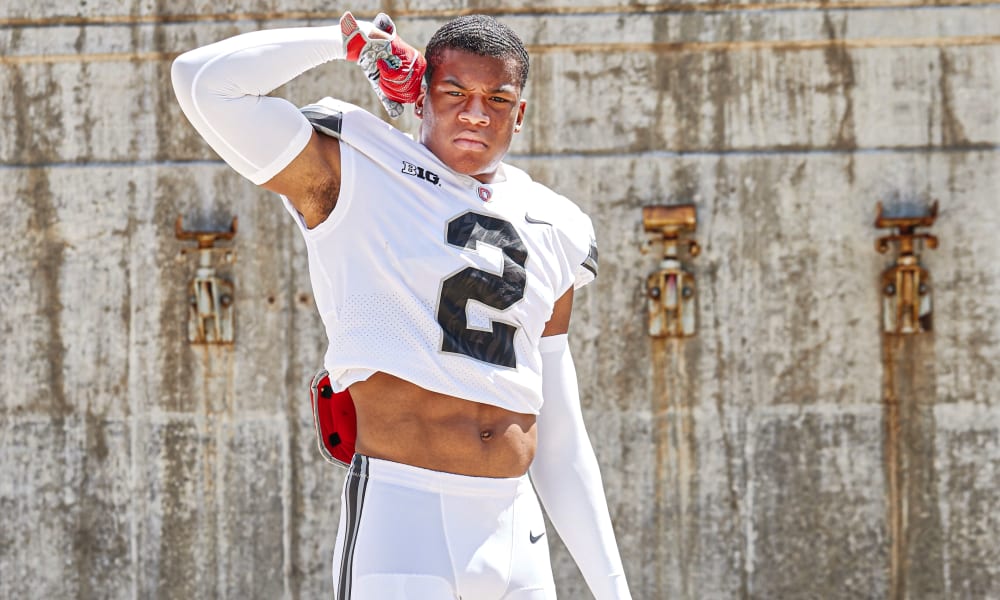 Kourt Williams will give Ohio State a talented prospect at the hybrid Bullet position. (Kourt Williams/Courtesy)

COLUMBUS — Ohio State is one step closer to finishing its 2020 recruiting class and added a huge piece on Wednesday. Kourt Williams announced that he picked the Buckeyes over Texas A&M, Tennessee, Penn State, Oklahoma and others, giving the program another defensive building block.

Who is Kourt Williams? Why is the four-star linebacker the right fit for assistant coaches Greg Mattison, Jeff Hafley and Al Washington as the Buckeyes attempt to change their defensive scheme?

Lettermen Row has all the angles on this versatile defensive standout covered here, including what his commitment means to Ohio State, the Big Ten and more.

What Kourt Williams gives Ohio State on the field

At times it may sound like a broken record. But what Kourt Williams provides for the future of the Ohio State defense versatility, speed and high football intelligence — just like so many other big-time recruits the program has landed recently.

Williams is the prototypical player for Ohio State’s new Bullet position, because at 6-foot-1 and almost 220 pounds, he has the size to be a traditional linebacker prospect but the speed (4.6 seconds in the 40-yard dash) to step back and run with receivers and tight ends over the middle of the field as a safety.

As a junior at powerhouse St. John Bosco (Bellflower, Calif.), Williams recorded 74 tackles, two sacks and two passes broken up while primarily lining up at linebacker. He’s quick to the football and arrives with authority. But unlike a lot of players in his position, he plays under control and excels in the read-and-react role that he’s been asked to play for the Braves.

In Columbus, the eventual position for Williams depends on his physical development. But expect his career to start with him lining up in the same role that current Buckeyes junior Brendon White plays now.

The addition of Kourt Williams is another huge win for Ryan Day and the Buckeyes as they look to eliminate discussion about any potential recruiting fallout following the retirement of Urban Meyer. It’s also another notch in the belt for defensive coordinator Jeff Hafley, who led the recruitment of Williams since joining the Ohio State coaching staff at the end of last season. Hafley continues to jostle with Clemson defensive line coach Todd Bates and Buckeyes receivers coach Brian Hartline for the title of Recruiter of the Year according to 247Sports.com.

Williams is the second big-time talent in the Class of 2020 from California, joining 4-star cornerback Clark Phillips, a player he’s grown very close to in the recruiting process. Williams is the third player from historic St. John Bosco to commit to Ohio State since the summer of 2016, though former Braves safety Jaiden Woodbey eventually decommitted and signed with Florida State instead.

If Williams is considered a linebacker, he’s the third and final piece of a group that includes 4-star Cody Simon and 3-star Mitchell Melton. If he’s a defensive back, he’ll join the class alongside Phillips, 4-star cornerback Lejond Cavazos and Arizona 4-star safety Lathan Ransom, who committed to Ohio State earlier this month. It’s a spectacular group either way, and it gets even better if Muskegon (Mich.) athlete Cameron Martinez winds up on the defensive side as a potential option in the secondary as well.

Commitment No. 22 in the class, adding Williams means the Buckeyes have narrowed the gap on Alabama for the country’s second-ranked class. He is the country’s No. 162-ranked overall prospect in the Class of 2020 and California’s 15th-best player according to the 247Sports.com composite rankings.

What makes Kourt Williams stand out

Williams is an on-the-field leader in one of the country’s most talented, best-prepared football high school programs. That kind of experience at a place with soaring expectations prepares him more than most for the rigors of college football at a place like Ohio State.

The role as a leader is something he’s taken on more than ever in the past few months, and St. John Bosco coach Jason Negro told Adam Grosbard of the Press-Telegram that it’s been vital for his team.

That’s one of the many reasons he’s a great fit for Ryan Day’s first full recruiting class at Ohio State.