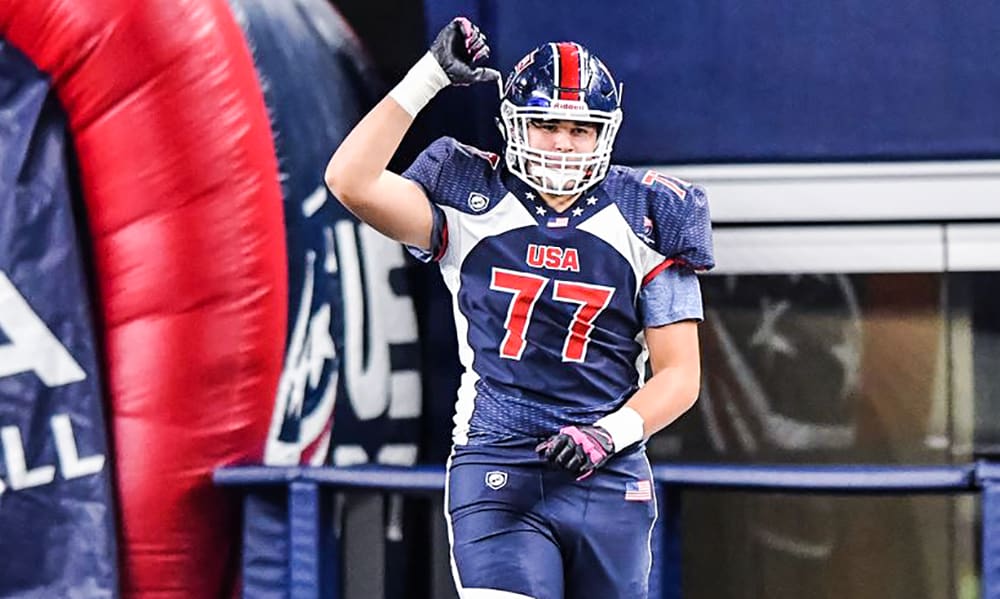 Who is Fryar? Why was he the right choice for the Buckeyes as their sixth offensive line commitment of 2020?

Lettermen Row has all the angles on this big-time offensive line addition and what his commitment means to Ohio State, the Big Ten and more.

What Josh Fryar gives Ohio State on the field

The Buckeyes wanted a sixth lineman in the Class of 2020, but they wanted to be very picky about who they would add in that role. Josh Fryar checks all the boxes for Greg Studrawa, Ryan Day and the Ohio State offense.

At 6-foot-5 and 294-pounds, Fryar has the size and ability to play all five offensive line spots for Ohio State. That was one of the primary reasons why he felt the Buckeyes were pursuing him as aggressively as they have.

The fact that it doesn’t matter to Fryar is exactly why it does to Ohio State. His versatility is a huge asset, and his strength means that he can fill a bevy of different needs in an offensive line that is becoming somewhat position-less. Don’t think that his only qualification is his flexibility, though, because Fryar can play at an elite level.

He uses his hands well and has a strong base that helps him as a run blocker. And he’s athletic and explosive enough to play defensive tackle for his high school.

Fryar is the sixth offensive lineman in the Class of 2020, and his decision puts a cap on what was a pivotal position of need for Ryan Day’s first full recruiting class as the head coach of Ohio State.

Indiana’s second-ranked player and the country’s eighth-ranked guard prospect, Fryar is ranked as a 4-star prospect by 247Sports.com. He’s a player who could be ranked much higher in the composite rankings by the time this recruiting cycle is over.

With Fryar choosing Ohio State over his home-state Hoosiers, it once again proved that the chance to play in Columbus is one of the few football opportunities that players from all over the Midwest and the rest of the country have a tough time turning down. The road to playing time may be harder, but the chance to suit up for the Buckeyes and win Big Ten and national titles remains the biggest draw in the region. Fyrar had 20 offers from coast to coast, but nothing made sense like picking Ohio State.

The Buckeyes 19th commitment in the 2020 class, Fryar’s verbal expands their lead over Michigan as the Big Ten’s top-ranked recruiting class and closes the gap on LSU. Ohio State is drawing closer to what it hopes can be a top-three class by December.

What makes Josh Fryar stand out

Like a lot of offensive linemen, Josh Fryar isn’t searching for the spotlight and actually prefers to stay out of it. So much, in fact, that during his official visit to Ohio State, Fryar surprised his future teammates by declining an opportunity to partake in the photoshoot inside of Ohio Stadium that has become a staple of visits.

“I am not into the photoshoot thing,” Fryar told Lettermen Row. “I think it’s a waste of time.”

Maybe that doesn’t seem to be that big of a deal. But in this modern era of internet recruiting, it helps underscore how different the mentality that Fryar has is.

He’s a big-bodied, blue-collar offensive lineman that will fit in perfectly with the “slob” mentality that has been a staple of the Ohio State offense since 2012.

Continue Reading
You may also like...
Related Topics:josh fryar