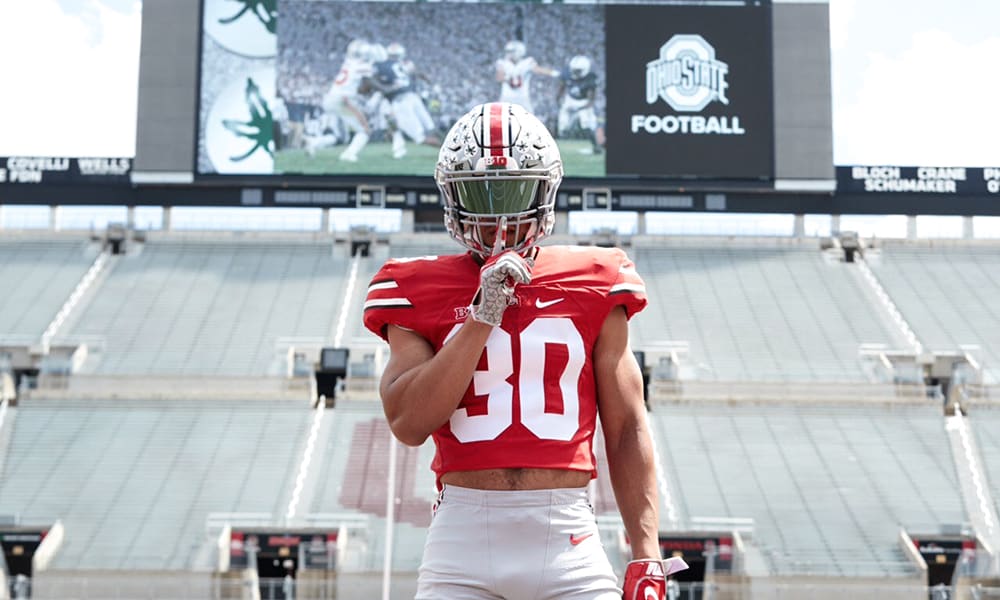 Cody Simon visited Ohio State once in the last two years but it was enough for him to commit to the Buckeyes. (Cody Simon/Twitter)

Who is Cody Simon? How did the Buckeyes so quickly make inroads in his recruitment?

Lettermen Row has all the angles on this star linebacker and what his commitment means to Ohio State, the Big Ten and more.

What Cody Simon gives Ohio State on the field

Simon, the country’s 10th-ranked outside linebacker prospect in the Class of 2020, is the new breed of linebacker being recruited by the Buckeyes. He’s not the biggest player on the field at 6-foot-1, 218-pounds, but he’s a quick, instinctive prospect who plays fast and plays smart.

Though he could potentially fill the role of the new Bullet position at Ohio State, Simon has been recruited by the Buckeyes primarily to play as a true linebacker prospect.

His on-the-field strengths are his intelligence and athleticism. He’ll run the 40-yard dash in less than 4.65 seconds and has next-level explosiveness and agility.

When trying to make a comparison to a recent Buckeyes linebacker, I think that Ryan Shazier — though Shazier had a different top end speed — is a fair comparison for what he’s capable of becoming.

The first linebacker committed for Buckeyes assistant Al Washington — and heavily recruited by defensive coordinator Jeff Hafley as well — Simon’s recruitment shows exactly how strong the brand of Ohio State football still is. The Buckeyes were not involved in his recruitment at the beginning of the spring and Simon, New Jersey’s fourth-ranked prospect, had not visited the school in over two years when he stepped on campus for his official visit over the June 21 weekend.

And a week later, he’s committed to Ohio State. If there’s still a sense about Ryan Day not being able to maintain the recruiting juice that Urban Meyer had, this type of recruitment and quick commitment should help ease any remaining fears. Simon will be the first linebacker but it remains to be seen how many will follow. The Buckeyes are still hot on the trail of Maryland 3-star Mitchell Melton — who makes a college decision on July 3 — and 4-star California prospect Kourt Williams, who projects at the aforementioned Bullet position for Ohio State.

What makes Cody Simon stand out

Cody Simon is another player, and person, that fits what has to be considered the “new normal” for Buckeyes football players. Simon is a highly intelligent, thoughtful young person who has avoided the recruiting hype-machine as much as possible despite being one of the country’s best prospects.

In May, he talked with Lettermen Row about his recruitment and you can easily see what we mean when we say he’s someone that fans will appreciate in Columbus. His brother, Shayne, plays at Notre Dame and Simon — most thought — would follow him. The Irish never pursued him and though Ohio State was later to recruiting him than Nebraska, Penn State and others he wanted to give them a real shot to win the battle. They did.

“They know that they came a little later than most,” Simon, the country’s 11th-ranked outside linebacker, told Lettermen Row. “But they are doing the best they can to make me feel welcome and supported.

“The coaches are also really easy to talk to. It started with [defensive coordinator Jeff] Hafley when he came to the school and he was extremely transparent with me. He told me everything about my recruitment with Ohio State.”