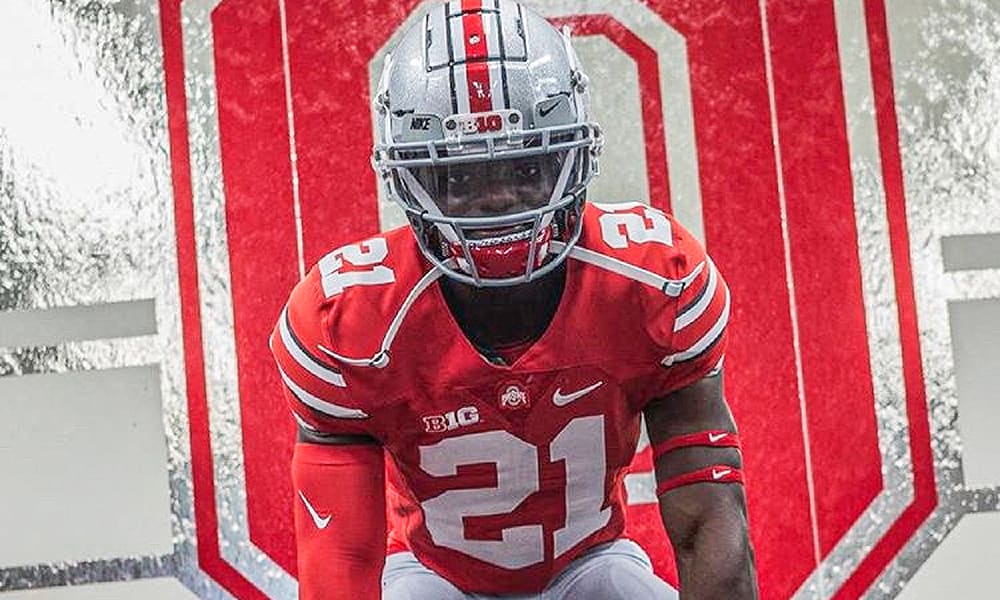 Clark Phillips was a primary target for Ohio State for months and committed during his official visit. (Clark Phillips/Courtesy)

COLUMBUS — The country’s fourth-ranked cornerback has made his decision: Clark Phillips III has picked Ohio State.

Who is Phillips? What makes the 4-star defensive back from California such an important piece of the 2020 puzzle for Ryan Day and the Buckeyes?

Lettermen Row has all the angles on the potential star in the secondary and what his commitment means to Ohio State, the Big Ten and more.

What Clark Phillips gives Ohio State on the field

The tape on Clark Phillips shows an explosive athlete capable of controlling a football game on offense or shutting down top receivers as a defensive back.

The 5-foot-11, 180-pound cornerback plays aggressive, physical football — and does it efficiently. He’s cat-quick, and when he has to turn up the field and just run, there aren’t many guys in California capable of running with the state’s ninth-ranked prospect. Phillips has been electronically timed at 4.54 in the 40-yard dash and will quickly get to 200-plus pounds in college while improving his speed and agility.

Phillips was a top target for Ohio State at cornerback after the program offered him in January, and it never looked back. He’s exactly the fit that Ryan Day, Jeff Hafley and the rest of the Ohio State coaching staff wants on defense.

If there was any concern about the defensive recruiting for the Buckeyes, the addition of Clark Phillips should help ease some of those concerns. This is an elite prospect at one of the game’s most important positions and a major win for Ryan Day — showcasing his ability to recruit from coast-to-coast. It’s also significant for new co-defensive coordinator Jeff Hafley, who has quickly shown himself as one of the country’s elite recruiters despite being away from the college game for seven-plus years.

The timing of Phillips announcement is perhaps the most intriguing thing here for Ohio State. Choosing to make this announcement while he’s on campus making his official visit reveals a unique understanding of the recruiting game and how he can personally help kickstart what could be a huge two-week run for the Buckeyes by being a leader through actions and words.

As far as his position goes, Phillips is the fourth-rated cornerback in the country and the second cornerback prospect to commit to Ohio State, joining IMG Academy (Bradenton, Fla.) 4-star Lejond Cavazos. This pair will now work together to add more defensive backs to the mix, especially with top targets like Makari Paige and Lathan Ransom on campus for their official visits at the same time as Phillips.

What makes Clark Phillips stand out

The addition of Phillips is one more example of wholesale changes being made by the Ohio State coaching staff on the recruiting trail. Yes, talent is always king in Columbus. But the type of young person being targeted by the Buckeyes is at an all-time high — and Phillips fits that bill.

He’s a committed student and a top-notch football player. And it may sound cliche, but he’s just another high-quality player and person heading to Ohio State’s football program.

In his first interview with Lettermen Row, Phillips impressed with his candor and his cause.

“A balance of quality education and football,” he said then about what he was looking for in a school. “I’m looking for coaches that can develop me as a player and that believe that my skills fitting in their system. The school’s environment is important and opportunity after football.”

There are few places that fit that bill any better than Ohio State does right now, which is exactly why Clark Phillips made that his pick for his commitment.