Connect with us
Ohio State commit Cameron Martinez is one of the country's best football players and athletes. (Birm/Lettermen Row)

COLUMBUS — Ohio State picked up another commitment in the Class of 2020 as 3-star Michigan athlete Cameron Martinez chose the program over Minnesota, Northwestern, Michigan and dozens more on Thursday morning.

Who is Cameron Martinez? How has he gone from position-less standout to top priority for Ohio State in a matter of months?

Lettermen Row has all the angles on this Michigan star and what his commitment means to Ohio State, the Big Ten and more.

What Cameron Martinez gives Ohio State on the field

It may come across as bias since I’ve been trumpeting Cam Martinez as one of the country’s best football players for the last two years, but throw out the recruiting ranking for Martinez. The lack of a true, projected position combined with the fact that he plays in small-town Michigan probably skews his national perception a bit. Stated plainly, anybody who has seen Martinez on the field knows he’s a special talent.

Usually when a recruited prospect is labeled as an athlete it’s because he’s a high school quarterback playing in that spot to help his team, but it isn’t where he’s likely to play in college. That fits Cameron Martinez, the Michigan Player of the Year last season.

Martinez is surely capable of playing quarterback at a number of schools in college. But at a place like Ohio State, that’s not the case. In Columbus, he’ll be utilized in all sorts of ways — though his eventual position hasn’t been settled on yet.

That’s because Martinez, 6-foot and 190-pounds, is capable of making plays and being a major contributor to the Buckeyes in a number of ways. At The Opening regional camp in Massillon in late May, Martinez dominated the event from the wide receiver position, and his film from that afternoon in Northeast Ohio helped solidify his place as a priority target for everyone on the Ohio State coaching staff.

Defensive coordinator Jeff Hafley and receivers coach Brian Hartline have each maintained a deep, consistent relationship with Martinez since February. That battle for his eventual position is going to be interesting to watch in the summer of 2020, but Martinez projects very well at either spot and will also compete for return duties at Ohio State.

Martinez gives the Buckeyes one of their top priorities and one of the country’s most versatile athletes. He also helps provide insurance for the Ohio State coaches on either side of the football as Ryan Day and his group hope to wrap up the 2020 class.

Looking at the numbers, Martinez ranked as the country’s No. 21 overall athlete and is Michigan’s eighth-ranked player according to the 247Sports.com composite rankings.

Martinez picking Ohio State over Minnesota, Northwestern, Michigan and the 24 other offers he held is a big win for the Buckeyes because his ranking isn’t at all indicative of how he’s viewed by the Ohio State coaching staff. His addition allows the Buckeyes to now turn their focus at wide receiver to bringing in Mookie Cooper, who could potentially compete with Martinez in the H-back/receiver role.

As a potential defensive back, Martinez’s commitment means Jeff Hafley and company will turn focus to Lathan Ransom, Kourt Williams and Elias Ricks.

The value of Martinez, aside from being a really good football player, is that he gives Ohio State a player that opens up other avenues in this recruiting class because of his versatility.

With Martinez now committed, Ohio State has 18 verbal commitments (kicker Jake Seibert will grayshirt, however) and the Buckeyes move even closer to LSU for the country’s third-ranked recruiting class. The second commitment from Michigan in this cycle for Ohio State, Martinez joins offensive lineman Grant Toutant, who committed in June. That duo will kick off their senior season against each other in late August. 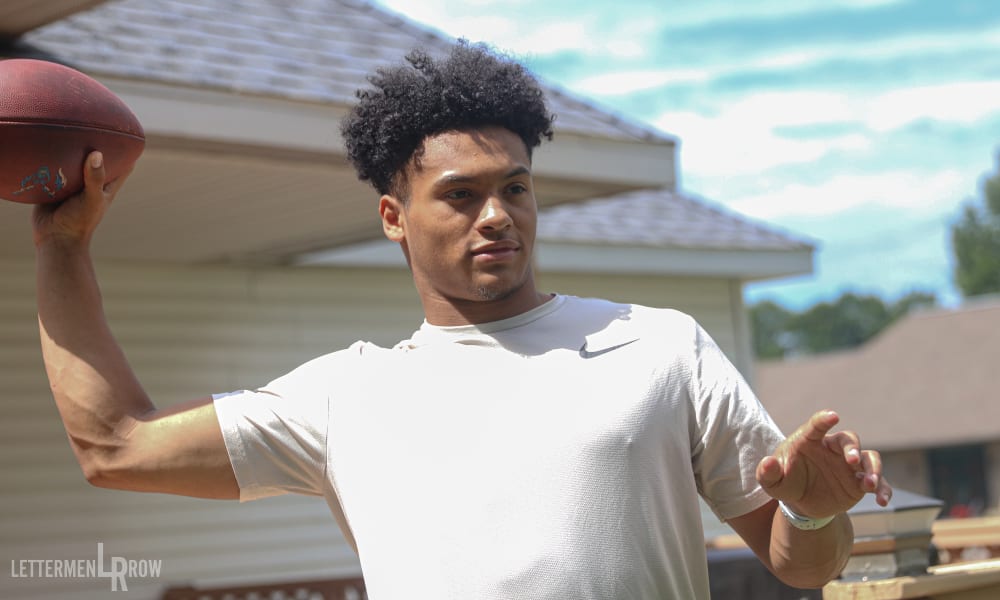 What makes Cameron Martinez stand out

Ohio State loves multisport athletes, and Martinez plays football, basketball and runs track for Muskegon, one of the country’s most storied and successful football programs. He will come to Columbus well-versed in what it takes to compete because the Big Reds are geared that way and have prepared dozens of players for the rigors of college football.

Despite growing up a Michigan fan, Martinez found himself drawn to the Buckeyes in the last few years thanks to his older brother, Christian, who he’s viewed as a role model throughout his life. He’s excited to live out what has become a shared dream for the brothers.

“My older brother, Christian, loved Ohio State growing up, so when he watched them I was watching them with him,” he said. “We went to the football camps there as little kids, and I loved going up there for those.

“I started to love watching Ohio State play on Saturdays when Christian would watch them, and it’s always been a dream to have an offer from Ohio State. Now it’s a dream come true.”