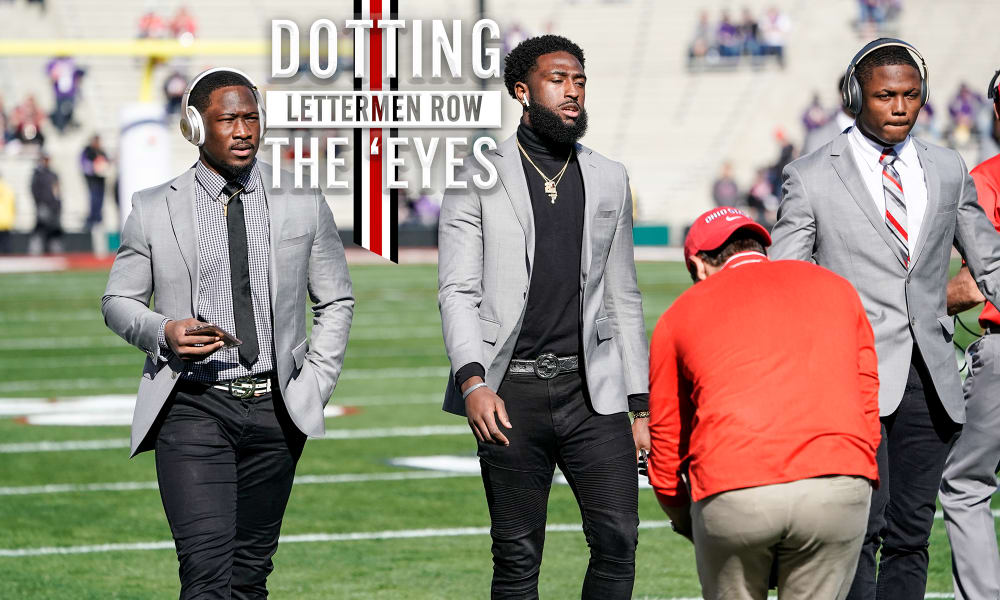 Stay in touch or be left out because Ohio State recruiting is a 24-hour, seven-day-per-week obsession. What’s the latest news as the Buckeyes build for the future? Get that and more Sunday through Thursday on Lettermen Row. Today we talk with Ohio State targets about the NFL combine and how the performances put on by Buckeyes stars changes their recruitment.

The Buckeyes made a big impression on St. Joseph’s (Philadelphia) 2021 quarterback Kyle McCord when he and a pair of teammates visited Ohio State on the first weekend of February. One of those teammates was receiver Marvin Harrison, Jr. an early favorite to be a 5-star prospect in the Class of 2021.

Ohio State has emerged as a contender for Harrison thanks to that visit and the growing relationship between the 6-foot-4, 175-pound sophomore and receivers coach Brian Hartline. Ohio State has worked hard to make a good impression on Harrison, and the way that a trio of program products showed out at the NFL Combine this weekend may have been the best way to do that.

“It made a huge impact, I actually called Coach Hartline and we talked about the Combine — and it really is a huge impact [on a recruit],” Harrison told Lettermen Row on Saturday night. “I think they had the most receivers there, and three of them are running 4.4 40-yard dashes or lower.

“What really impressed me the most was you could tell that the Ohio State receivers looked ready for the NFL. Their routes were sharp, all of them were some of the best route-runners there. They all caught the ball good in the drills. Just seeing the success all of them had there and seeing how prepared they are for the next level really made a big impact on me.”

There won’t be many young receivers with a better understanding of what it takes to the get to the next level than Harrison, whose father is an NFL Hall of Fame player at the position. The young Harrison has not talked to his dad about the elder’s recruiting process because the time periods are so different that it wouldn’t provide any real insight, but there’s no doubt what they’ve learned and seen from Ohio State has their attention.

“I’ve never asked about his recruiting process, obviously we are a part of different time periods with different coaches and players,” he said. “But one of the big things in my decision is becoming the best player I can be and hopefully having the opportunity to play at the next level. I want to be more than prepared for the next level, and I think Ohio State will do that for me.”

The Buckeyes are hoping to see Harrison back on campus in the next few weeks.

“I’m working on it,” Harrison said. “Most likely I will catch a spring practice. Hopefully this month or maybe the spring game.”

It’s not just Marvin Harrison who was paying attention to the Buckeyes and their combine performances this weekend. A trio of Ohio State targets from California, Washington and Texas all commented about the way Johnnie Dixon, Parris Campbell and Terry McLaurin performed in Indianapolis.

The father of 2020 commit Gee Scott made it perfectly clear why his family is trusting the Ohio State staff with his son’s future.

Trust me, there’s a reason why THEEEE Ohio State is the ⭕️nly place for my son. #Development https://t.co/05n2WKLJNq

Recent offer Jalen McMillan, who has quickly become one of the Buckeyes top targets in the 2020 class at receiver, may have said it best.

“It really shows that they know how to develop receivers,” McMillan said.

Another Washington standout — and maybe the only player high on the board for Hartline and the Buckeyes in 2021 — is Emeka Egbuka. The Steilacoom product saw what he’s come to expect from Ohio State’s Zone 6.

“It definitely made a good impact,” Egbuka said. “It makes me think they are doing everything right, and obviously have one of the best strength staffs in the country. They also had the best routes, which excites me.”

Latrell Neville is another 2021 receiver with an offer, and the Missouri City, Texas 4-star sees Ohio State as a path to the next level.

“It definitely makes a huge impact,” Neville said. “I want to go somewhere that they are going to develop me to be the best wide receiver that I can be, and with their guys, it shows they’re doing it.”

Side note: Neville also has his first long-awaited visit to Ohio State set.

“I’ll be up in Columbus for the spring game.”

The Buckeyes have offered another 2020 offensive tackle, and this one is a long-time commitment of the South Carolina Gamecocks.

Extremely blessed to have received an offer from the Ohio State University ⭕️ @tOSUFootball @Birm pic.twitter.com/l4AwXAF9no

“It definitely puts them high on my list,” Walker said. “It’s hard to explain, it’s just big. I was so happy.”

Walker is the country’s 15th-ranked offensive tackle and checks in at 6-foot-4 and 285-pounds, which likely sets him up as more of guard candidate for Ohio State. He was offered by offensive line coach Greg Studrawa and told Lettermen Row he’s working to get a visit set up to Ohio State.

Another offensive linemen who has been in communication with Studrawa more frequently lately has been Norwalk’s Trey Leroux. The country’s 86th-ranked offensive tackle is Ohio’s 38th-ranked player in the Class of 2020 and is hoping for a Buckeyes offer.

He may need to camp in Columbus this summer to get it, but Leroux will keep building his relationship with Ohio State before then and will return to campus next week to do so.

“I’ll be up there on March 8,” Leroux told Lettermen Row. “There’s been a steady flow of communication with them.”