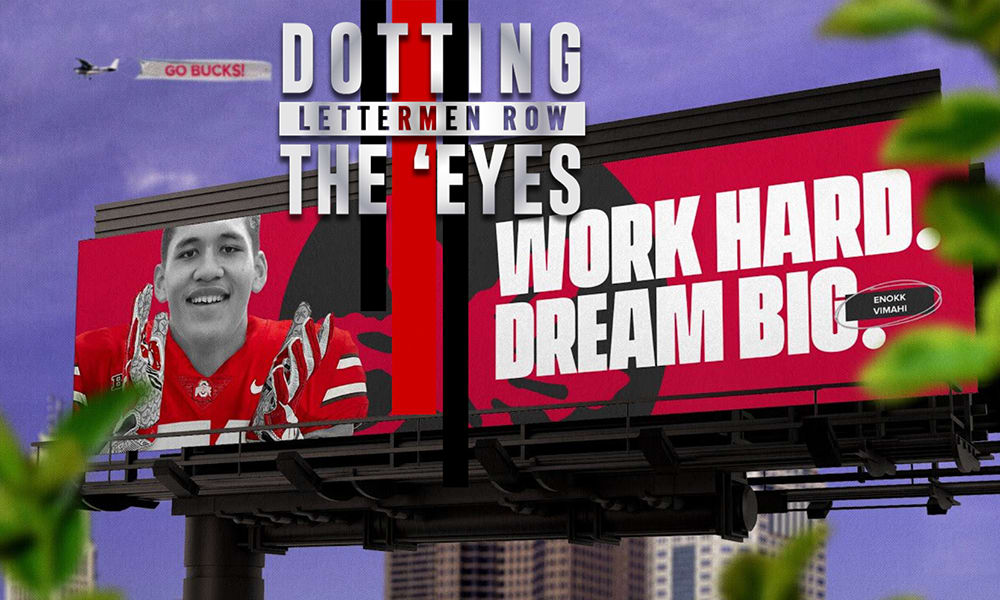 Stay in touch or be left out because Ohio State recruiting is a 24-hour, seven-day-per-week obsession. What’s the latest news as the Buckeyes build for the future? Get that and more Sunday through Thursday on Lettermen Row. Today’s discussion centers on the Buckeyes three remaining 2019 targets as they prepare for impactful official visits.

Ohio State will have one official visitor this weekend as the Buckeyes prepare for the final two-week sprint to signing day.

Kahuku (Hawaii) High School 4-star offensive lineman Enokk Vimahi is heading to Columbus — and could be the final official visitor for the Buckeyes in the Class of 2019.

Ohio State’s search for more offensive linemen has taken it to the western reaches of the country, and this weekend will be a major opportunity to try to steal the nation’s seventh-ranked offensive guard away from West Coast-favorite USC and Oklahoma, which has been surging in recent weeks.

The Buckeyes will hope that a glaring need for offensive linemen and the fact that Ryan Day has been personally handling Vimahi’s recruitment will be enough to offset the concerns of moving 4,500 miles away from home.

This is expected to the final visit for Vimahi as he prepares for a Feb. 6 decision.

Vimahi is one of the three players still being actively recruited by Ohio State in this cycle, and the other two are each headed to Penn State this weekend for official visits.

Ohio State commit Doug Nester is going to make his third visit to Penn State since September. For the Buckeyes, it’s likely to be the trip that decides his eventual recruiting fate, even if he does make a visit to Virginia Tech over the Feb. 2 weekend. We’ve written ad nauseam about Nester in recent weeks, and one way or another, we’re closing in on the end of the discomfort that the Ohio State coaching staff has to be feeling about his status.

Buckeyes target Dawand Jones will also head to Penn State this weekend, taking an official visit that he told Lettermen Row could happen when we talked to him earlier this week.

“Ohio State is still my top school,” Jones said. “It’s between Penn State and Florida for my last official visit.”

Well, it will be Penn State. And there’s yet another layer of intrigue to this weekend in Pennsylvania as two of Ohio State’s top remaining targets will get the full-on sales pitch by James Franklin and the Nittany Lions.

It’s been a busy for days for Ohio State on the recruiting trail and it seems a good portion of the time has been spent in the DMV — Baltimore, Washington DC and Virginia. The Buckeyes have offered a handful of young players in the next two recruiting cycles, including a 2021 standout quarterback.

Caleb Williams is a 6-foot, 190-pound quarterback at Gonzaga (Washington DC) High School, and the offer from the Buckeyes is his 15th.

He had already been offered by Alabama, Florida, Georgia, Michigan, Florida State, Penn State and more, making him one of the country’s most offered 2021 players at the game’s most important position. Williams is the second quarterback in that class offered by Ohio State in the last week as it turns its attention toward juniors-to-be with Jack Miller already in the fold for 2020.

The Buckeyes offered a pair of stars at Baltimore powerhouse St. Frances Academy on Thursday. The first to make his offer public was wide receiver Traeshon Holden.

Extremely Blessed to say I have Received an Offer from The Ohio State University❤️ #GoBuckeyes🗣 pic.twitter.com/wpyhPaPpLp

Holden is a 6-foot-4, 195-pound wideout in the Class of 2020 and has offers from almost 20 schools including Florida, Michigan, LSU and more. He’s the nation’s 45th-ranked receiver.

Blake Corum, a 4-star running back at St. Frances, was also offered by Ohio State.

Extremely blessed to receive an offer from The Ohio State University #BuckeyeNation pic.twitter.com/i0Qu84vv0v

Corum is a 5-foot-9, 180-pound tailback and is ranked as the country’s 19th-best running back. He has offers from 25 schools like Georgia, Michigan, Michigan State, Nebraska, South Carolina and others.

With Ohio State’s major need at running back in 2020, he’s an interesting player to watch moving forward after rushing for almost 1,500 yards and 20 scores as a sophomore.

Very excited to have received my 27th offer from Ohio State!!! pic.twitter.com/whlMZUbsse

Christ is the country’s 47th-ranked 2020 offensive tackle and Virginia’s 10th-ranked prospect out of Dominion High School in Sterling.  Ohio State has offered a number of 2020 tackles, but few have the offer list that this 3-star talent has amassed early.

Christ has offers from Penn State, Michigan, Notre Dame, Virginia, Northwestern, Nebraska and a host of others.